Palestinians Have a Right to Defend Themselves

Everywhere, we hear that Israel has a right to self-defense. But when it comes to the question of whether Palestinians suffering under brutal occupation have the right to defend themselves, those same voices are conspicuously silent. 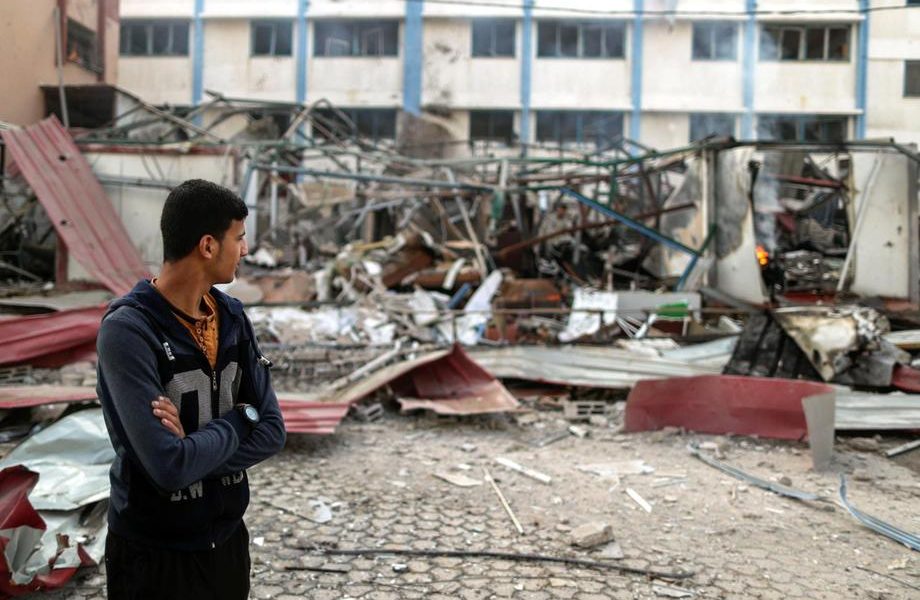 A Palestinian man looks on at the site of an Israeli air strike in Gaza City. Photo: Reuters

In a statement issued Monday, US State Department spokesperson Ned Price condemned “in the strongest terms” the rockets fired from Gaza into Israel. Urging “de-escalation on all sides,” Price then delivered the standard recognition of “Israel’s legitimate right to defend itself and to defend its people and its territory.”

When the Washington bureau chief for Al-Quds daily asked whether Palestinians shared in the right to self-defense, Price’s response was equivocal, affirming that “the concept of self-defense,” should apply “to any state.” To the stateless Palestinians, one can then conclude, the State Department extends no such rights.

This is a double standard shared by much of the corporate media, as well as among politicians, across Western democracies. A search of the media aggregator Factiva finds that the five US newspapers with the highest circulation — the Wall Street Journal, USA Today, the New York Times, the Washington Post, and the Los Angeles Times — have run 343 articles this century containing the phrases “Israel’s right to self-defense”, “Israel has a right to defend itself”, or “Israel’s right to defend itself”. Streaks of light are seen as Israel’s Iron Dome anti-missile system intercepts rockets launched from the Gaza Strip towards Israel, as seen from Ashkelon, Israel, May 11, 2021. Photo: Reuters/Nir Elias

Implicit in this double standard is the idea that Palestinians should simply submit to their own murder, assault, and dispossession. Presently, that means acquiescing to Israeli efforts to steal Palestinian houses from six families in the Jerusalem neighbourhood Sheikh Jarrah. It means that Palestinians are supposed to unconditionally surrender to Israeli attacks on the Al-Aqsa compound and on the Al-Aqsa Mosque itself, the third holiest site in Islam — including the hurling of grenades at worshippers as they prayed — during Ramadan, Islam’s holiest month.

As of Sunday, the Palestine Red Crescent Society in Jerusalem had treated 541 Palestinians for the injuries that Israeli forces inflicted with rubber-coated metal bullets, tear gas canisters, and “severe beatings”; ambulances were prevented from reaching the wounded at the time. Denying the Palestinians’ right to defend themselves, furthermore, means demanding their total submission as Israel targets Palestinian demonstrators in cities like Nablus, Bethlehem, Qalqilya, and Hebron. More than a hundred of these protestors required medical assistance.

Also read: Zionists in Israel Have Hollowed Out Their Ties With Their Own History

Since 2008, Israel has killed roughly 6,000 Palestinians, more than half of them civilians — 1,250 were children. By comparison, 251 Israelis have been killed in the same period. Since 2009, Israeli demolitions have displaced over 11,400 Palestinians, more than 2,600 of them in East Jerusalem. Almost 620,000 Israelis are settled on Palestinian land in the West Bank, including East Jerusalem, in violation of international law.

The World Food Programme notes that 68.5% of Palestinians in Gaza are food insecure and 53 % live in poverty while “all productive sectors, basic social services and infrastructures” have “collapse[d]” as “Gaza’s socioeconomic fabric is faltering due to the cumulative impact of 12 years of sea, land and air blockade”. The siege has destroyed Gaza’s health care system, depriving it of the critical resources necessary to cope with the spread of diseases, including the COVID-19 outbreak that Israel has allowed to ravage the territory, or to handle the devastating aggression Israel is now carrying out. In this context, it’s difficult to imagine any state or non-state group that wouldn’t fight back.

The Palestinian right to self-defense may not be recognised by the state of Israel or the media, but it is a right grounded in international law. In 1982, the UN General Assembly passed a resolution asserting “the legitimacy of the struggle of peoples for independence, territorial integrity, national unity and liberation from colonial and foreign domination and foreign occupation by all available means, including armed struggle.” The resolution refers to the Palestinians eleven times, explicitly describing them as “under foreign and colonial domination.”

Greg Shupak teaches media studies at the University of Guelph in Canada. He is the author of The Wrong Story: Palestine, Israel, and the Media (OR Books).