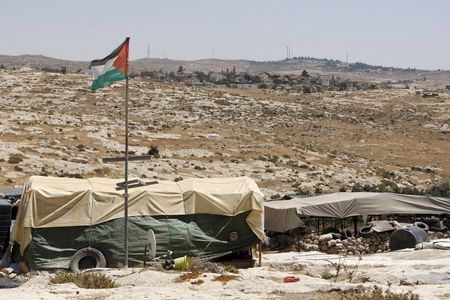 A Palestinian flag and tents in Susya village, south of the West Bank city of Hebron. Credit: Reuters/Mussa Qawasma

Asael, possibly the ugliest of all the illegal outposts in the southern West Bank – and the competition is fierce – is rapidly expanding. Yellow bulldozers, parked at the perimetre fence of the settlement, have carved out a huge swathe of intermeshed, crisscrossing gashes in the hill and valley just below.

This wide, deep wound in the soil has been sliced, needless to say, through privately owned Palestinian land. We know the families. We’ve plowed here, on the edge of the outpost. There have been many bad moments with the Asael settlers, the ones who we can see this Shabbat morning walking their dogs over the hill or praying to their rapacious god or swinging their children on the swings in the painted park just under their pre-fab caravans.

Winter morning, sunny, ice-cold. Guy is photographing the earthen gashes metre by metre. The families who own the land will submit a complaint to the police, not that it will do much good. The civil administration stopped the bulldozers earlier this week, but the fact that they’re still parked here bodes ill. Each one of them is hugely expensive and they’re still here. Actually, everything bodes ill here at Asael on this sun-drenched day.

The soldiers appear on cue. Three of them clamber down the hill to put a stop to our intrusion. They’re in winter uniforms, black on top, with ski masks and heavy weapons. Their officer, affable enough, asks for my identity card. I hand it over. He studies it. “You live near my grandmother’s house. What are you doing here, and why are you photographing me? You’re old enough to be my grandfather, aren’t you ashamed?”

“Why should I be ashamed?”

“I don’t like it when you photograph me. It’s impolite.”

I can see what’s coming. Harmless chatter, nothing worse. I turn off the camera. Peg is still photographing, despite the officer’s repeated demands that she stop. It seems this business of the cameras is all we have to talk about today. Over and over again he tells us that we’re not being nice.

He consults his superiors on the phone. “There are four Israeli citizens here,” he reports, “they have the right to come here and photograph the bulldozers and the digging, they haven’t invaded the settlement and they won’t stop photographing me.” By now this is becoming an obsession. I’m tired of it. Moreover, the cognitive dissonance is eating away at me, so wearily I say to him, “Look, forget this stupid thing about the cameras, I’m not photographing you now, just look around you at what is happening here. You know as well as I do that this outpost is illegal, and you can see that they’re now stealing more Palestinian land.”

“That’s none of my business. If you have a problem with the settlers, work it out in the courts. I have my job to do.”

Later, thinking back on it, I find the conversation insane and I’m sorry I got into it. A monumental crime is taking place, here and everywhere in the occupied territories. It’s picking up speed. The soldiers are complicit in it, though it’s coming from far above them – from the prime minister’s office on down. And on this bright winter morning, the officer on the spot thinks we’re being impolite.

Last week something unusual happened at Susya. A group of fanatical settlers had produced an inscription made of stones on what we call Flag Hill – Palestinian land, of course (newly plowed). The stones were stacked up to read ‘revenge’ in Hebrew. There was also a big stone-piled star of David. Our people came upon these rocks, and the settlers came at them. The soldiers turned up, and the settlers attacked them, too. This was too much even for the soldiers, who wrestled them to the ground and arrested three of them. They let them go in the evening, but for a brief moment, the tables were turned.

These are violent days in South Hebron and in the Jordan Valley. We reach Twaneh around 2:00 and find a Ta’ayush detachment still shaken after being attacked by masked settlers from Chavat Maon. The Ta’ayush volunteers were there to protect Palestinian farmers who had come to plow. The plowing was successfully completed, and the volunteers were on their way back to Twaneh when 15 settler thugs attacked, hurling big rocks, lots of them, and assaulting our people with their fists.

Dudy was hit in the head by a rock. Danny was beaten. One of the Italian volunteers living in Twaneh was hit and her (expensive) camera stolen. By sheer good fortune, no one was badly wounded or worse.

Guy calls the police, who eventually respond. We head uphill toward the site of the attack. The settlers are still flitting through the trees at the end of the path. We have good video footage, but it rapidly becomes apparent that there’s little point in submitting a complaint. The police will do nothing; the settlers were masked. To fill out the police forms is hardly more than a ritual gesture. We move on. Fifteen years ago, almost to the day, I was attacked, beaten, stone, and shot at by the settlers of Chavat Maon at this same point. I know what it feels like. I know for sure that they are celebrating their splendid raid and reveling in their spoils. Maybe I shouldn’t care.

‘Id is waiting to welcome us to Umm al-Khair. He’s become almost famous, with recent exhibitions of his sculptures and installations in Berlin and New York. It’s been many months since I’ve seen him. We embrace. We run through the dismal litany of house demolitions from the past few months. For the moment – always only for the moment – the courts have put a freeze on further demolitions at Umm al-Khair. ‘Id says, “No matter what we do, the Israelis will never let us live here; sooner or later, they will take these lands too.”

The settlement of Carmel abuts the shanties of Umm al-Khair, and recently the settlers have invented a new form of torment for their neighbours. Their sewage now flows through pipes that open onto the fertile fields in the wadi and the Palestinian grazing grounds. We pick our way over the rocks to study the large open pipe.

It’s one of those crystal winter afternoons. Every thorn stands out on the hills. Sheep cluster around the well on the next ridge. Ruins from the last four demolition raids are neatly stacked beside what used to be tents and homes. We’ve rebuilt a little, for the umpteenth time. The hills across the Jordan River turn to limpid mauve. It’s cold; one of the young girls, maybe four-years-old, in a ponytail and a blue sweater, stands barefoot at the entrance to her home. Goats bleat toward sunset, they get hungry. Tea appears. A wild parabola of pigeons swirls over the golden slope. Beauty is made from pain, great beauty from greater pain.

These notes aim to bear witness at what we, in Ta’ayush – Arab-Jewish Partnership –  see and experience week after week in the Occupied Territories, mostly in the south Hebron hills where we have long-standing ties with the Palestinian herders and farmers. They provide a fairly typical picture of life under the Occupation and of the efforts of Israeli-Palestinian peace groups to protest, to protect the innocent civilian population in the territories, and to keep alive hope for a peace that someday must come. The entries are personal and somewhat introspective, an attempt to make sense for myself of what I see.