Illegal Outposts and Struggles for Water: A Day in Palestine ‘Aziza proudly shows us the faucet. It’s a miracle: you just turn it, and water flows. She’s never had running water in her home. Comet Middle East put in the water tower and the pump to draw water from the well. The problem is that the well is running dry. It has to be replenished with water brought in by tanker, but the road is mostly impassable for a tanker. It’s not clear how this can be solved. It’s hot and dry today, 36 degrees or more, a hot Ramadan, hard on those who are fasting.

‘Aziza begs us to allow her to make us tea. Not today, we say, we have other places to visit, and work to do. We promise we’ll come back for tea after ‘Id. Kul sana wa-intum bi-khair, May you will be well year after year.

Happiness is spending two quiet hours with the shepherds in the wadi of Umm al-Amad, despite the presence of the soldiers watching us and them from the top of the hill. An outpost next to the settlment of Asahel. Credit: Michal Hai

There’s another new illegal outpost next to the settlement of Asahel. We climb the hill to see how’s it’s doing. They have a big sheep-barn with New Zealand sheep, recently sheared. Four young settlers are feeding them, their long tzizit flapping as they move. They ignore us and our cameras. Their problem, I say to Jonathan, is that they think God is a fact. Yes, says Jonathan, a scholar of Buddhist philosophy, a fact rather than a view or a point of view. A man sleeps in a tractor. Credit: Michal Hai

On the road between Asahel and Susya, we see a crowd of soldiers, some ten Palestinians milling around, a tractor. Hovering over them is one of the black army drones; it has been surveilling our movements all morning. We stop to find out what is wrong. Apparently, the drone discovered a water pipe running over the hills. This, the soldiers say, is a problem. How dare Palestinians lay down a water pipe on their own land, just like that? The Palestinians tell them the water comes from Samu’a in Area A. The Samu’a municipality is in charge. No, say the soldiers, including the officer from the Civil Administration, the senior person in this mid-day fracas, Palestinians can’t just bring water as they see fit. In fact, it seems, they are not supposed to be thirsty at all—it’s a kind of crime. They’re like camels and can go for days or weeks without drinking. Especially during Ramadan.

“We’re not using water to grow anything, we’re not cultivating oranges, we need to drink in this heavy heat, shob.” What, Palestinians feel heat?

So what happens now? The soldiers hesitate. They occupy themselves with the standard routine, that is, taking the Palestinians’ identity cards and registering them in their computers. Time passes like slow flame. The driver of the tractor sits on the tractor. Our presence – nine activists with cameras – is confusing the soldiers. Otherwise, maybe they would simply cut the pipe and go away. And the Palestinians would fix it. And the soldiers would cut it again. And so on. It’s a South Hebron ritual.

The drone, black, angular, grotesque, descends with a faint buzz and is put away. We wait in the white light of noon. We chat with the young boys. More soldiers arrive. A dignified gentleman appears from somewhere and patiently explains to them that the water is coming from Samu’a and they need it badly and it’s not really any of the soldiers’ business. This doesn’t help. The soldiers appropriate one of the identity cards and the keys to the tractor. Don’t worry, they say, we’ll be back.

Somehow, the keyless driver gets the tractor to start anyway and drives off. The soldiers leave in a dusty flurry. “While you’re at it,” Michal calls out to them, “why not do something about that new illegal outpost? It’s on your way.” Peace and silence descend on the hills. We also take our leave. An hour later we hear that the army did indeed come back; they confiscated the tractor.

For a Palestinian farmer, a tractor is like water. Maybe they’ll eventually get it back, after much running around and paying some exorbitant fine, thousands of shekels. 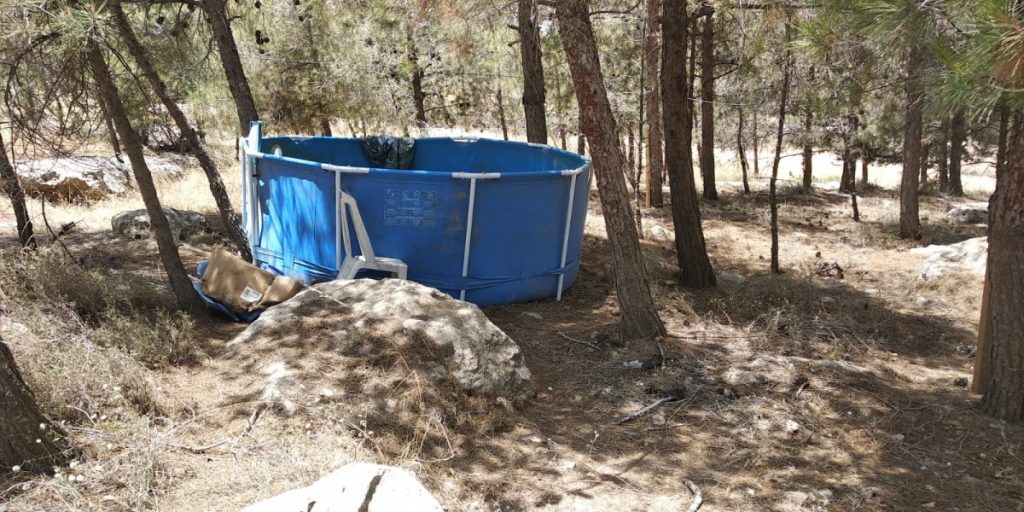 Last stop today: the new illegal settlement we visited 3 weeks ago, at Susya, where three activists were arrested with unusual violence. Water is on our minds. Let’s see where the settlers are getting theirs. Near the Susya cemetery we see the pipes attached to a source in the settlers’ hothouse, a flourishing business partly owned by Hishtil with other branches in Israel. There are two long pipes snaking up the hill—one for water, the other for electric power. We follow them up through the trees, past a noble white horse, past a temporary swimming pool, until we reach the big tent where the settlers are living. They’ve added a brick structure, maybe an outhouse. Anyway, no dearth of water here. 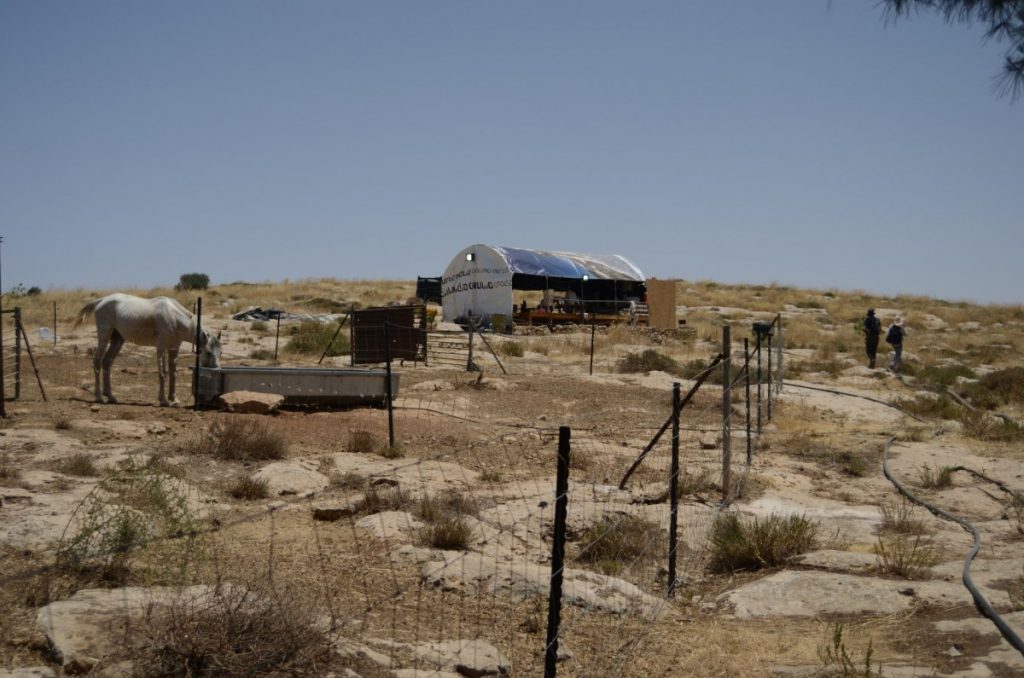 Now comes another ritual, or perhaps it’s a game, self-parodic and futile. Guy phones the battalion headquarters and also the headquarters of the Civil Administration to report that settlers from the illegal outpost have put in water pipes. The conversations go like this.

Hello, my name is Guy. We’re standing near the new illegal outpost at Susya, just past the trees and the cemetery.

Do you live in Susya?

So who are you?

I’m a citizen, my name is Guy.

We’ve just discovered that the outpost has new water pipes and power lines. And they’ve also taken over more land, plowed it and planted something, probably tomatoes. And they’ve built something new and solid. I suggest you send someone to see it.

Good, we’re waiting for you.

The army telephone operator is polite, even concerned, the one from the Civil Administration impatient:

Hello, this is Guy. I’m a citizen. We’re at the new illegal outpost at Susya.

We know about the outpost.

They have put down water pipes and electric cables and taken over more land.

We know about the outpost.

So what are you doing about it?

Are you calling about a matter of life and death?

Yes. Water is about life and death.

It’s the tone, and the unspoken premise, that matter. As if we are living in a state ruled by law, and a citizen can call up to report a crime, and the authorities will follow up and even act, and the criminal might be called to account. As if the army and the state were not themselves the criminals.

Waiting for the soldiers, we have lots to discuss. There’s the white horse tethered to a tree, owned by the settlers. We don’t want to judge the horse. Who knows what he’s thinking? Amiel recalls a dog that once crossed the lines. Settlers tried to sic him on the activists, and the dog came at them and then changed his mind and came back with them in the bus. I recall the soldier at Bil’in who couldn’t bear it any longer and similarly crossed the lines. Such things happen.

Michal says she wishes the settlers would choose more accurate names for their new outposts. Instead of “Angels of Peace,” for example, or “The Song of the Grass”, both flourishing in the Jordan Valley. Why not something like “Outpost of Racial Purity”? We could even put up a signpost with the name near the turn in the road and an arrow pointing the way. Even better would be “Poor Man’s Lamb”, Kivsat Harash. You will remember the parable the prophet Nathan cites to King David in Samuel II, 12. There was a rich man with many flocks, and a poor man who had only a single ewe lamb, which lived together with the man’s children, ate and drank and slept with them. The rich man had a guest; not wanting to kill one of his own sheep, he stole the poor man’s lamb and killed and cooked it for his guest. King David, hearing this from the lips of the prophet, is incensed and says the rich man must die. The prophet says, à propos of Bathsheva and her husband whom David sent to his death: “You are that man.”

Timeless words, a little spooky. You can hear them, in a modern variant, from Guy and Michal almost every day. So: Outpost of the Poor Man’s Lamb. Amiel remembers that once when he was being taken before a judge to extend his arrest, the policeman said to him: “Why are you fussing over one little Palestinian field? It’s negligible, batel be-shishim. Amiel said to him, “What to you is negligible is to the Palestinian the Poor Man’s Lamb.”

As we are about to give up, the soldiers arrive – the same fearless bunch that stole the tractor at noon – and they have a colored map, which they unfurl and study with Amiel, who makes some necessary corrections, and then we treat them to a tour of the outpost, the water pipes, the swimming pool, the newly plowed field. They take notes, they even thank us, they go away.

Then I remember that I’m thirsty. All photographs arranged by Margaret Olin.