Palestine Is Witnessing the Daily Brutalities of an Occupying Power

What we’re seeing is the brutal reality of an occupying power exercising its military might over a people stripped of their human rights. 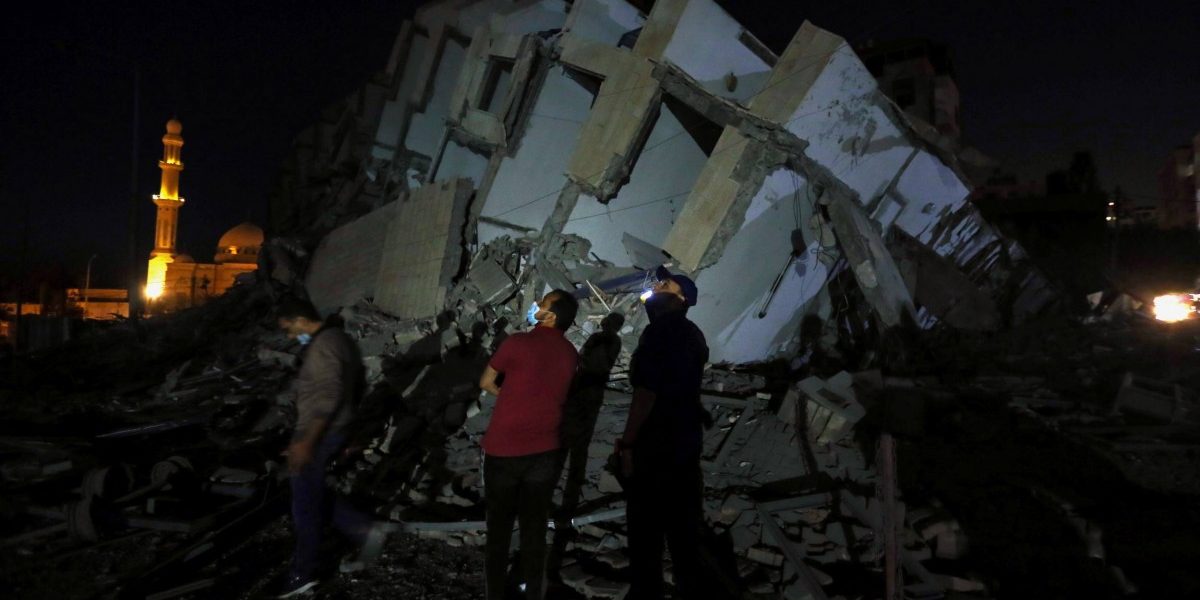 Palestinians look on as they stand at the site where a building was destroyed by Israeli air strikes in Gaza City May 11, 2021. Photo: Reuters/Ibraheem Abu Mustafa

It has been a brutal week for Palestinians in Jerusalem.

As hard-line Israeli settlers prepared a provocative parade through the Muslim Quarter of the Old City, Israeli security forces turned their guns on peaceful Palestinian protesters and worshipers performing Ramadan prayers at the Aqsa mosque, injuring hundreds in yet another brutal crackdown. Videos circulating on social media in recent days have shown Israeli police officers throwing stun grenades and shooting rubber bullets at Palestinians inside the mosque, attacking Palestinian worshippers with tear gas bombs, and viciously beating a Palestinian man in the mosque compound. On Monday, Israeli strikes in Gaza killed twenty Palestinians, including ten children.

Once again, Israel has turned its celebrations of Jerusalem Day, an Israeli national holiday commemorating the reunification of Jerusalem and the establishment of Israeli control over the Old City, into an occasion to repress Palestinians and remind the world that it is in fact, as a Human Rights Watch report acknowledged last week, an apartheid state.

Israel’s prime minister Benjamin Netanyahu has praised the police for “taking a strong hand” against Palestinians, declaring: “Jerusalem is Israel’s capital and just as every nation builds in its capital and builds up its capital, we also have the right to build in Jerusalem and to build up Jerusalem. That is what we have done and that is what we will continue to do.”

This is nothing but a brazen land-grabbing scheme, an expansionist plan hatched in broad daylight and backed up by violent settlers. Netanyahu’s “Greater Jerusalem” vision plans to annex Jerusalem, where hundreds of thousands of Palestinians — constituting nearly 40 percent of the city’s population, with thousands living beyond the “separation barrier” in East Jerusalem — are facing the daily prospect of displacement. Far-right settlers, armed to the teeth and emboldened by right-wing politicians, are insisting that the Israeli Supreme Court carry through the eviction of Palestinian families from East Jerusalem.

What is happening in Jerusalem, then, are not “clashes” between Israelis and Palestinians, as mainstream outlets would have you to believe. What is happening is the brutal daily reality of an occupying power, emboldened by unconditional US support and international apathy, exercising its military might against a stateless people living under its control, stripped of their basic human and civil rights. What is happening is a Netanyahu administration seemingly emboldened by the deafening silence from Washington, where the Biden administration has yet to take a clear stance on the its ongoing violation of Palestinian rights.

In Washington, the few exceptions to cowardly silence or pro-Israel cheerleading have come from left politicians.

Senator Bernie Sanders came out staunchly against the unbridled brutality of the government-backed Israeli settlers, tweeting: “The United States must speak out strongly against the violence by government-allied Israeli extremists in East Jerusalem and the West Bank, and make clear that the evictions of Palestinian families must not go forward.”

Representative Alexandria Ocasio-Cortez said in a Twitter message: “We stand in solidarity with the Palestinian residents. Israeli forces are forcing families from their homes during Ramadan and inflicting violence. It is inhumane and the US must show leadership in safeguarding the human rights of Palestinians.”

Congresswoman Rashida Tlaib shared a video on Twitter showing Israeli forces firing stun grenades into a Palestinian medical facility, saying: “There is no reason, none, to attack people while they are praying or seeking medical attention — other than to dehumanize and terrorize them.” Calling on President Joe Biden to intervene and prevent Israel from entering Temple Mount, where its forces have been attacking Palestinian worshippers, Tlaib further warned that “too many are silent or dismissive as our U.S. tax dollars continue to be used for this kind of inhumanity. I am tired of people functioning from a place of fear rather than doing what’s right because of the bullying by pro-Israel lobbyists. This is apartheid, plain and simple.”

Also read: Inside The Campaign to Prevent the Forcible Removal of Palestinians in Sheikh Jarrah

Representative Ilham Omar also tweeted in solidarity with the Palestinian worshippers, writing: “This is happening as Muslims pray tarawih & tahajud in Palestine. Families who pray all night during Ramadan, the mosque is like home. Palestinians deserve to find refuge in a mosque and peace in Ramadan.”

For decades, consecutive administrations have given Israel a blank check to pursue its expansionist and segregationist policies against Palestinians, showering it with billions in public money and backing it to the hilt — lavishing money on an apartheid government that is killing and displacing Palestinians every day.

The United States must not be complicit in these continuing atrocities. The Biden administration must pressure Israel to end its occupation, dismantle its illegal settlements, and recognize Palestinians’ rights. It should follow the example of Senators Sanders and Elizabeth Warren, who have repeatedly called for imposing conditions on US military aid to Israel.

Israel cannot be allowed to act with impunity, to kill and displace free of consequences. Occupation and apartheid must come with a cost.

Seraj Assi is the author of The History and Politics of the Bedouin.