Palestine: Can a Handful of Adolescent Criminals Destroy an Entire Village?

In Dir Jarir, demented teenage settlers can turn up at any moment, in the Palestinian fields, in their makeshift tents, and even in their homes. They threaten and bully the residents and often they beat them. 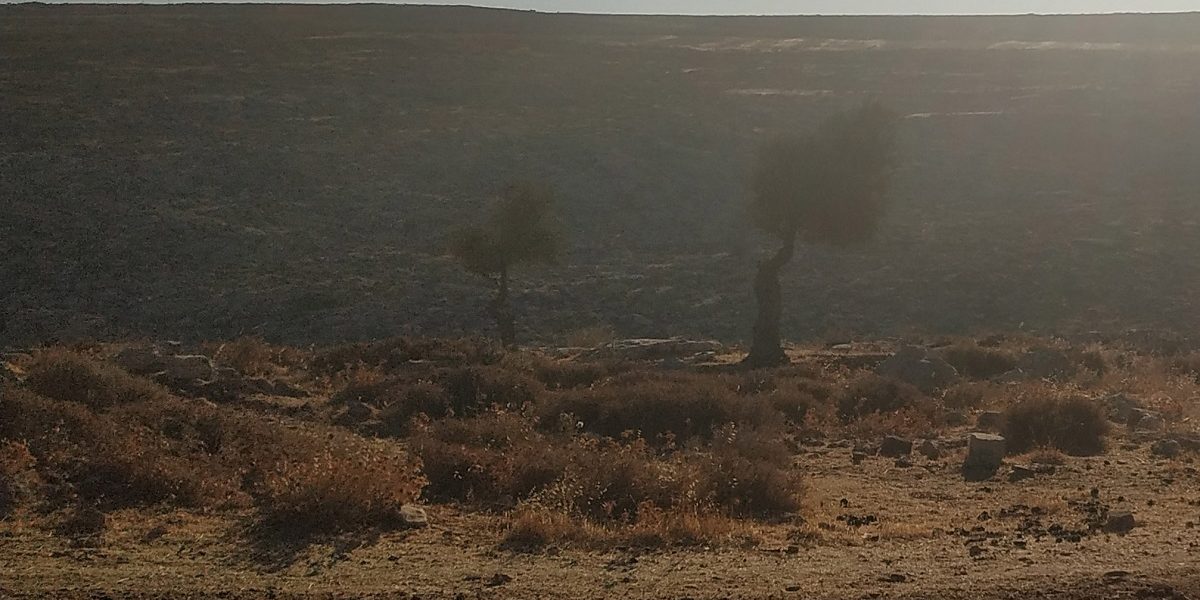 Dawn at Dir Jarir. One herd of sheep is already out on the hills with Khairi’s son. They’re grazing not so far from the noxious outpost of Maaleh Ahuvia, but for now, things are quiet. No settlers in sight. That sentence reveals the story of Dir Jarir. Dawn, noon, dusk, midnight, and all the hours in between – demented teenage settlers can turn up at any moment, in the Palestinian fields, in their makeshift tents, and even in their homes. They threaten and bully them, often they beat them, and always they invade their fields, vineyards, olive groves, and grazing grounds, wreaking havoc. The shepherds and farmers live in a state of terror, and the apparatus of the state is unwilling to intervene. There are good reasons to think that the army in the area stands with the settlers. The police are reluctant to come to Dir Jarir without an army escort. 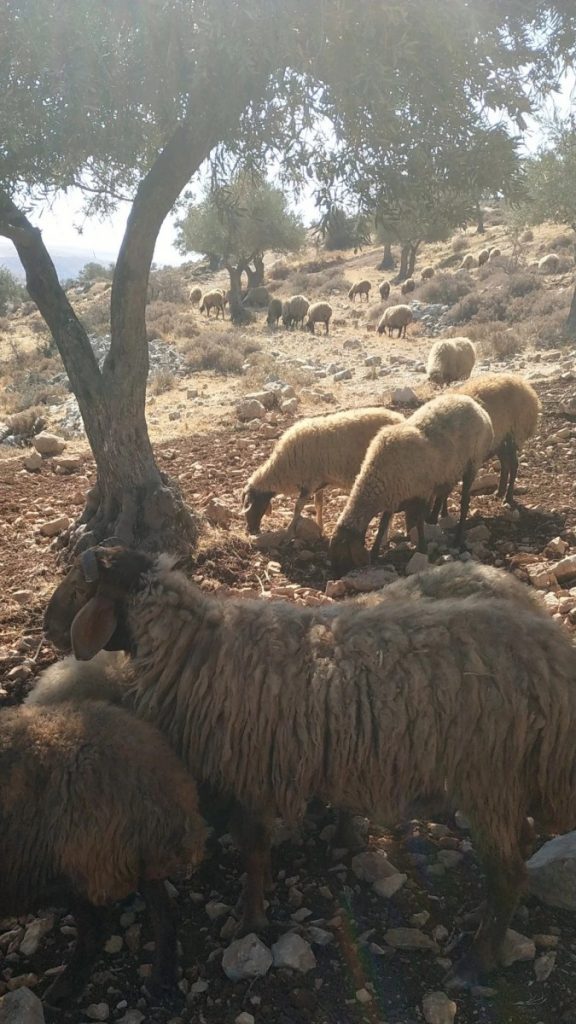 Can a handful of adolescent criminals destroy an entire village? Yes, easily. Sadiq and Faris tell us the stories of the last few days. Arik knows the situation, he’s in the village almost every day. But not even Arik Ascherman can stand guard day and night for weeks and months on end. To put things simply:  these shepherds and farmers are being relentlessly pushed farther and farther westward, away from their lands. We are talking about privately-owned Palestinian land, with documents of ownership going back as far as Ottoman times – which means, Abu Rafa’ tells me, that they go back to the beginning of time. He shows me on his cellphone the kushan, the deed of possession, from the days of the Turks, verified and stamped by the Israeli occupation authorities at Beit-El in the mid-90s. 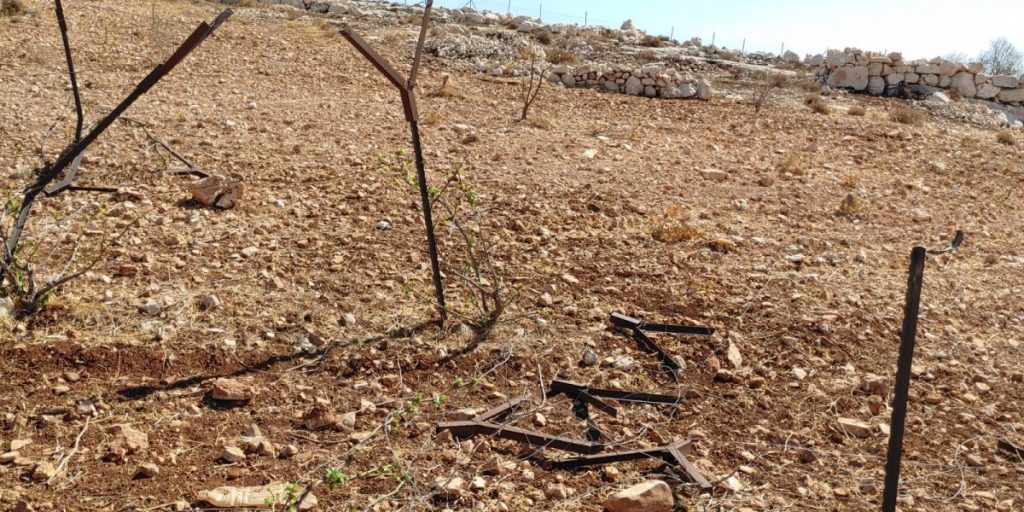 At 9:30, we get a frantic phone call from Abu Rafa’, who is out in the fields. A settler herd with two shepherds is at the edge of what was once his vineyard. (On April 2, 2019, these settlers destroyed the vineyard, cutting down the vines at their roots. The damage was immense, a loss of tens of thousands of shekels. Since then, the settlers have visited the vineyard many more times, recently uprooting the iron poles that once held the vines in place; they litter the ground, some twisted into grotesque shapes.) Abu Rafa’ says there are also settlers on the hill just above him. We race over the dirt paths – hardly more than goat trails – to join him. He is in danger. Soon we see two settler cars blocking the path, two settlers in one of them, a third standing outside, his face masked – attack mode. Neriya Ben-Pazi, the dark presence who reigns over the outposts in this area, is in the driver’s seat. After a few moments, he drives off. The masked would-be attacker describes an arc on the hill, ending up a few meters from Arik’s car. I’m expecting him to start throwing rocks at us, or worse. Arik gets out of the car and stands his ground, facing him, staring him down. After some tense minutes, the settler crosses the path and moves on.

We find Abu Rafa’ in the remains of his vineyard. Then, a surprise: a police car and an army jeep turn up in answer to Arik’s emergency call. I know the policeman, Dudy, from a good day we had (no thanks to Dudy) in Taybeh, just down the road. This time, Dudy urges Abu Rafa’ to file a complaint. The army officer hears our story and takes off. He seems to know Dir Jarir. 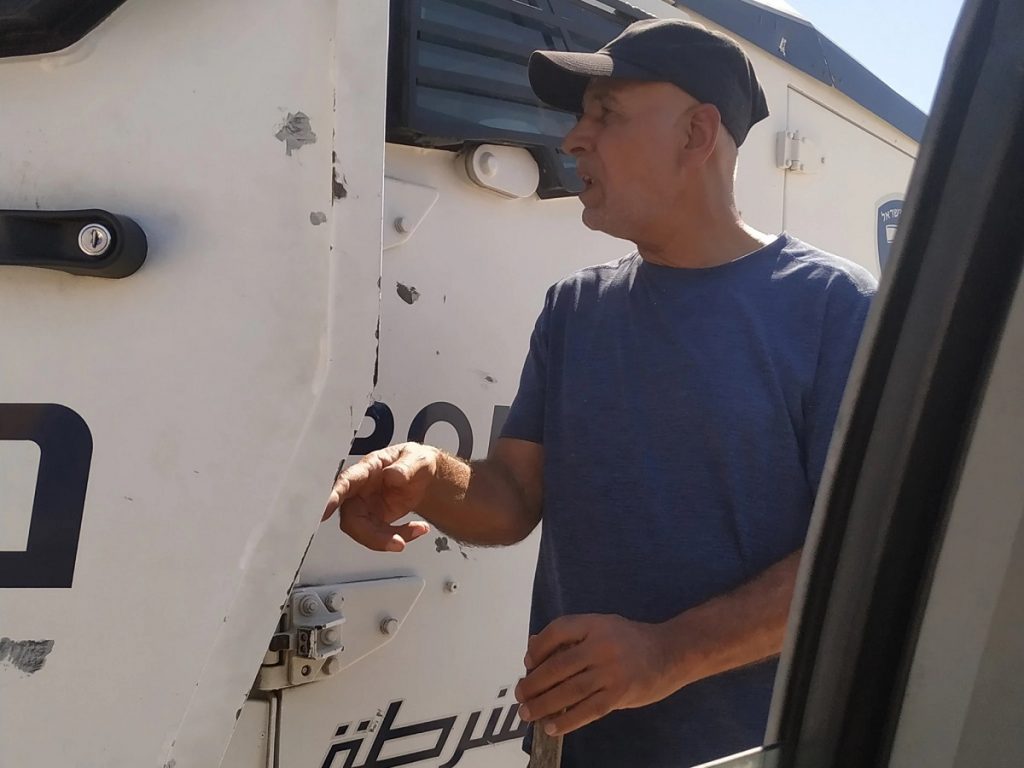 Abu Rafa’ says he’s prepared to come to the Binyamin police station and file a complaint against the settlers for trespassing, violence, and damages. He’s already done that twice. This might seem to you a rather ordinary business, but in fact it’s a big step. In general, the landowners, both at Taybeh and in Dir Jarir, are reluctant to go anywhere near the police station. For good reason: I myself know of several cases where Palestinians who had the audacity to submit a complaint to the police ended up being arrested, sometimes for long periods. A Palestinian who walks into a police station is guilty a priori of the crime of being a Palestinian. But Abu Rafa’ and Muhammad Hasan and others in Dir Jarir can see that the only hope for their survival is to use the mechanisms still available to them and to us, including the police. Arik worked hard, over months, to convince them of this.

Maybe – it is at least possible – if the criminal complaints pile up, and the press, including the international press, shows interest, the police and the army can be pressured into doing something. And it’s not too far-fetched to imagine that our best hope is to sue the settlers in the civil courts for massive compensation. Abu Rafa’ says they destroyed ten years’ work – not only the grapes but also apricots, almonds, whatever this sometimes-fertile land can produce. Some 1,500 trees. He points to the outpost on the ridge above us: it has a water tower looming over a few dismal shacks. Abu Rafa’ says that tower was his. He had twelve like it; eleven were destroyed by the settlers, one – the one they stole – is left.

Everything is documented fully; we have dozens, maybe hundreds, of videos and stills from Dir Jarir. It’s no secret that the outpost at Maaleh Ahuvia is illegal; the army actually demolished it some months back, but the settlers, as always, rebuilt it that same night. Nothing in these parts is as long-lived, indeed as permanent, as an illegal outpost. Except for these shepherds who have been sleeping outside near their grazing lands to protect their sheep, even though they no longer dare to pitch tents. So we accompany Abu Rafa’ and Muhammad to the Binyamin police station. There are five of us to testify for the complaint: Arik, the two landowners, Henry Szor, and me. It takes some four to five hours; the wheels grind very slowly. The police officer who takes down our reports is business-like, attentive, professional. I like him. Maybe, I think, it’s not all for nothing, this long day – my most boring day ever in Ta’ayush, though not by any means my first in the police station. Henry’s wife hears the story from him and says, “They’ll never act on that complaint. It’s like Don Quixote.” Henry says: “Don Quixote – now that’s something great.”

There’s the matter of doing the right thing without keeping accounts. Abu Rafa’ is full of despair, possibly the good kind of despair. He came back to Dir Jarir after many years in the US, only to find himself facing the settlers and in danger of losing his lands. He has 24 grandchildren but no real hope for the future. Still, he persists. He speaks of the days, over 20 years ago, when there was hope. And now? Like everyone I meet in Dir Jarir, he is full of admiration for Arik, who is fighting the good fight, who will never give up. I remember the words of the ancient Chinese historian, Sima Qian: “The refusal of one decent man outweighs the acquiescence of the multitude.”

On the way home, late afternoon, Arik says: “Acts of oppression exact a price from the oppressor.” “How so?” I ask him, though I know he is right. Arik says: “The price is in the deadness of the heart.”

All photographs by David Shulman.

This article was originally published on Touching Photographs. Read it here.