In a nation often riven by social, ethnic and religious strife, Abdul Sattar Edhi won respect for his devotion to helping the poor. 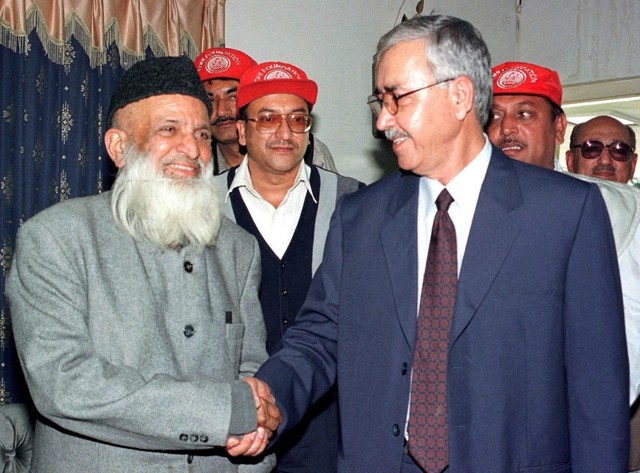 Karachi, Pakistan: Famed philanthropist Abdul Sattar Edhi, who set up one of Pakistan‘s biggest welfare organisations and was revered as a ‘living saint’ by many in the South Asian country, died in hospital late on Friday, July 8.

The announcement of Edhi’s death triggered a wave of accolades on TV and social media. Pakistan‘s Prime Minister Nawaz Sharif paid tribute to him as “a great servant of humanity,” and said he would receive a posthumous presidential medal and a state funeral.

The 88-year-old’s reputation for austerity and generosity resonated deeply in Pakistan, a country of 190 million people whose government is riddled with corruption and where public health and welfare services are weak.

“There are few men who have done as much good, and made as much a difference to the lives and livelihoods of the Pakistani people as Abdul Sattar Edhi,” Sharif said hours before Edhi‘s death.

Edhi, a short man with a long white beard who often wore a traditional cap, had been ill for several years after suffering kidney failure, Edhi‘s son Faisal told journalists in Karachi.

Sharif’s government had offered to fly Edhi abroad for treatment, but he refused, saying he wanted to be treated at a public hospital in his own country.

The Edhi Foundation runs a vast fleet of ambulances, orphanages and medical clinics across the country.

Last year when a devastating heat wave struck Karachi – a city of about 20 million people – the foundation was at the forefront of the response: its ambulances tended to the sick, the Edhi morgue was used to store the dead and many of the poor buried their family members in the Edhi cemetery for free.

Edhi‘s funeral on Saturday, July 9, is expected to be one of the biggest in Pakistan‘s history.

“He was a noble soul who dedicated his life in service of mankind,” said Sushma Swaraj, the foreign minister of India, Pakistan‘s historic foe.

In a nation often riven by social, ethnic and religious strife, Edhi won respect from every strata of society for an ascetic lifestyle that was devoted to helping the poor regardless of their background.

Edhi lived in a bare room in Karachi, alternating between his two suits of black clothes and occasionally listening to recordings of Koranic verses on a battered old tape recorder.

“My mission is to love human beings … Each day is the best day of my life,” Edhi had said.

Edhi was well-known for berating Islamist groups such as Tehreek-e-Taliban Pakistan (TTP) for their attacks on civilians, criticising the government for incompetence and corruption and denouncing the elites for dodging taxes.

His wife, Bilquis, a nurse, oversees the women’s shelters and the adoption of orphans. They have found homes for about 25,000 children.

Edhi‘s foundation has provided relief in Bangladesh, Afghanistan, Iran, Sri Lanka, Croatia, Indonesia and in the US after Hurricane Katrina.

Pakistanis took to Twitter to mourn the death of a national hero many call a “living saint” and “Pakistan‘s Mother Teresa”.

“In his death he has united all of Pakistan, across all affiliations, in mourning. That in itself is a measure of his greatness,” said a Twitter user named Imran Khan.