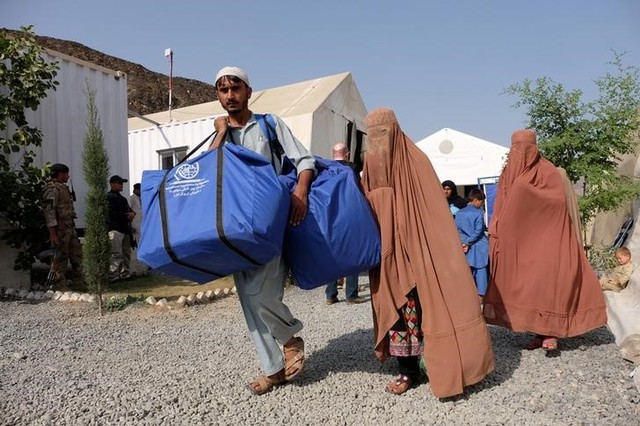 An Afghan family, who were living as refugees in Pakistan, carries bundles of supplies at a humanitarian aid station in Torkham, Afghanistan, October 22, 2016. Credit: Reuters/Josh Smith

Kabul: The number of Afghan refugees returning from Pakistan, already at the highest level in years, may increase this year if Pakistan maintains its forceful policies, Human Rights Watch (HRW) said on Monday.

Aid workers and Afghan officials worry that the returnees are coming back to a country in conflict and economic crisis, led by a government already struggling to maintain basic living standards.

Pakistan has provided millions of Afghans with refuge for decades and police and officials deny reports that they are targeting Afghans, though officials have said they should go home.

Amid recent political tension between the uneasy neighbours, aid organisations have raised concerns over the treatment of Afghans in Pakistan.

HRW senior researcher Patricia Gossman told Reuters her group was highlighting the issue ahead of a meeting this week between Afghan, Pakistani, and UN officials, which is expected to set the stage for this year’s refugee policies.

“We want to make sure that what happened last fall does not repeat,” Gossman said, referring to what her group described as “a toxic combination of deportation threats and police abuses” of Afghans in Pakistan last year.

In the second half of 2016, Pakistan ‘pushed out’ nearly 365,000 of the country’s 1.5 million registered Afghan refugees, as well as just over 200,000 of the estimated 1 million undocumented Afghans in Pakistan, the rights group said.

“These practices are tantamount to forcing people across the border … and that’s why we say it’s unlawful,” Gossman said.

Pakistani authorities have made clear in public statements they want to see similar numbers return to Afghanistan in 2017, the rights group said.

Pakistani foreign office spokesman Nafees Zakaria said he could not immediately comment on the HRW report until he had fully read it.

The group also criticised the UN for what its investigators saw as a failure to ensure that Afghan refugees are truly returning voluntarily, as called for under international law.

Ariane Rummery, a spokeswoman for the UN High Commissioner for Refugees (UNHCR), said it had documented policies by governments on both sides of the border that helped contribute to the surge in returning refugees.

“UNHCR does not promote returns to Afghanistan given the enduring conflict in different parts of the country and its limited absorption capacity,” she said in a statement.

“At the same time, the agency does help those who decide to return based on the options available to them.”

Gossman also said the Afghan government needed to refrain from making “reckless” promises of things like land and money for returning refugees, that cannot be kept.