Opposition Fears Turkey's Judicial Shake-Up is a Crackdown on Dissent

The ruling AK Party maintains the reforms will clear judicial bottlenecks, but critics see them as payback for those against President Erdogan's values. 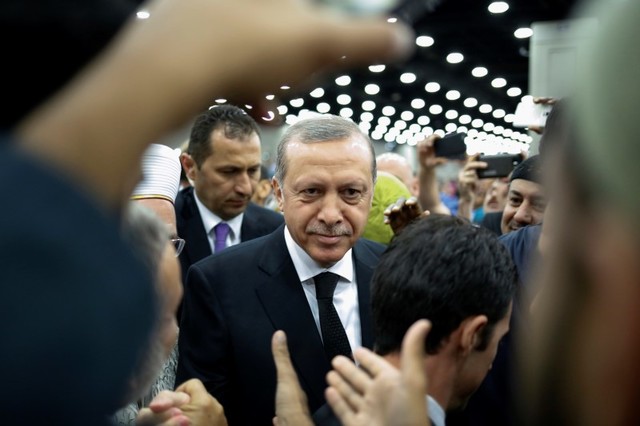 Istanbul: Two days after calling for Turkey’s justice minister to resign on Facebook, prosecutor Menderes Arican received a letter reassigning him from a western province to a relative backwater in the east with immediate effect.

The 49-year old, a prosecutor for two decades, has little doubt that his sudden self-described “exile”, seven months into a new posting, was punishment for his criticism of the government.

His reassignment, part of a nationwide shake-up of thousands of judges and prosecutors, comes as the ruling AK Party (AKP) pushes wider reforms within the higher judiciary.

Critics see it as a bid by President Tayyip Erdogan to remove troublesome judges and tighten his grip on the courts, at a time when he is seeking constitutional change to bolster his powers and introduce an executive presidential system. The AKP says it will clear bottlenecks in the legal system.

“We’re going through a period where the executive seeks total control of the judiciary,” Arican told Reuters by phone from the western province of Canakkale, where his family still lives even though he has been working in the east since February. “This is against the separation of powers.”

An official at the justice ministry said Arican’s claims on his appointment were “not true, do not reflect the truth” but did not elaborate further.

Deputy prime minister Mehmet Simsek told Reuters last week that the aim of the reforms was to end a crippling bottleneck in the court system, something he said was demanded by the business community.

The EU has repeatedly raised concern about the erosion of judicial independence in Turkey, with officials warning it is taking the country away from European standards and further undermining an already strained EU membership bid.

Under a draft law being debated in parliament, most of the 711 judges at two of the highest courts – the Council of State, which hears cases lodged by citizens against the government, and the Supreme Court of Appeals – will be removed. It is not clear how many of them will be reappointed in the new structure, which will have fewer courts and judges.

Erdogan will then be able to appoint a quarter of the judges at the Council of State, allowing him to stack one of the country’s most important legal bodies with his allies.

The head of the bar association, Metin Feyzioglu, has described the changes as dangerous, while a senior EU source said they “look like payback for judgments challenging Erdogan”.

The reforms come on top of an unprecedentedly big reshuffle this month by the High Council of Judges and Prosecutors (HSYK), which oversees judicial appointments and falls under the control of the justice ministry.

The HSYK reassigned more than 3,700 judges and prosecutors in its latest biannual reshuffle, a quarter of those in office, sparking accusations of a witch hunt. It said in a statement on June 10, that the calendar was announced as usual but there were more reassignments to plug shortages in some regions.

“The HSYK now sees everyone who doesn’t think in line with its own values as ‘the other’ and is basically… telling them all to face the consequences of being on the wrong side,” said Murat Aydin, 45, a judge who was transferred from the Aegean province of Izmir to the Black Sea province of Trabzon.

His reappointment came a few months after he appealed to the constitutional court challenging Turkey’s law on insulting the president – an article prosecutors have invoked more than 1,800 times since Erdogan took office in 2014, suing journalists, academics, a former Miss Turkey and students.

Many court cases in Turkey are already heavily politicised.

A five-year jail term handed in May to Can Dundar, editor of the opposition Cumhuriyet newspaper, for revealing state secrets came after Erdogan said he would not forgive the newspaper’s reporting of an alleged Turkish weapons shipment to Syrian rebels. Rights groups condemned the sentence.

Four Turkish academics were held for several weeks earlier this year on charges of spreading terrorist propaganda for reading a declaration calling for an end to military operations in the mainly Kurdish southeast. They are still facing trial and Erdogan has said they must pay a price for such “treachery”.

He has also said he wants to see members of the pro-Kurdish opposition Peoples’ Democratic Party, parliament’s third-largest party, prosecuted for alleged links to militant groups and has stripped lawmakers of their immunity as a first step.

The courts have become more loyal to Erdogan’s agenda, his opponents say, since large-scale purges in the judiciary following a corruption scandal in 2013.

Erdogan, then prime minister, cast the scandal as a plot orchestrated by US-based cleric Fethullah Gulen, a former ally-turned-foe whose network of religious followers held key positions in the court system.

AKP lawmaker Resat Petek, a member of parliament’s justice commission, said the reforms currently under discussion were aimed at flushing out any remaining influence of Gulen, whom Erdogan accuses of trying to form a “parallel structure”.

“There will be a liquidation of this parallel organisation from the higher ranks of the judiciary,” Petek told Reuters, estimating that around 160 members of the court of appeals were chosen while the HSYK was still under Gulenist influence.

Opponents fear one system of tutelage will simply be replaced with another.

“We don’t want a Gulenist structure within the judiciary but neither do we want an Erdoganist structure,” said Feyzioglu.

AKP officials say the reforms will speed up a judicial system swamped by as many as two million cases, some waiting years to be heard. But Ali Suat Ertosun, who has worked at the Court of Appeals for 16 years, sees a different agenda.

“They will get rid of the members they don’t like and will fully control the judiciary,” he said. “It is unconstitutional, and an intervention against judicial independence.”