Obituary: Kofi Annan Struggled to Escape the Curse of History

When his UN career ended in 2006, he listed his main achievements as establishing the concept of a responsibility to protect civilians when their rulers will not or cannot. 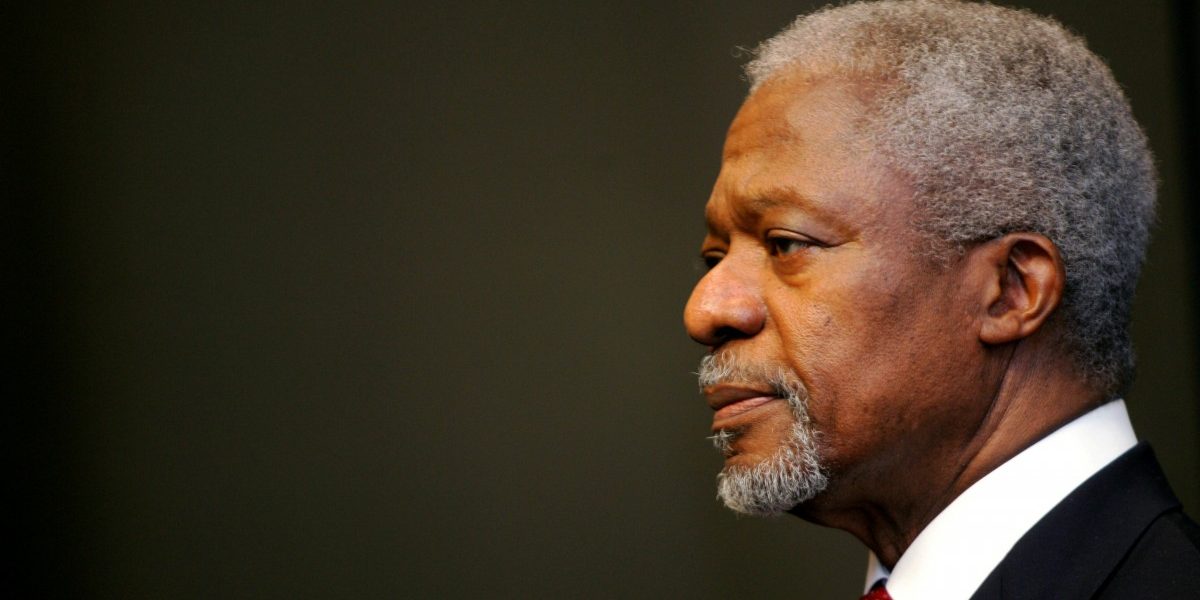 Geneva: Kofi Annan, the former United Nations Secretary-General and Nobel Peace Prize laureate who died on Saturday, will be remembered as a dedicated humanitarian whose career was tarnished by ugly conflicts that spun out of control.

Annan was unable to bring peace to Syria and bring to rest the failures of diplomacy in Rwanda, Bosnia, Darfur, Cyprus, Somalia and Iraq, which are likely to drown out the plaudits for his softly spoken mediation and efforts to eradicate poverty and AIDS that won him the 2001 Nobel Peace Prize.

Annan was brought up in an ethnically divided culture in his native Ghana, but one where dialogue was prized and outright conflict rare. It was a time of optimism and confidence as Ghana headed for independence from Britain.

“He’s driven by the idea of ‘don’t think no’, always looking for the best outcome,” Fred Eckhard, Annan’s spokesman during his time as secretary-general, once told Reuters.

His reputation as a mediator was burnished by his success in halting a spiralling conflict in Kenya in 2007, when rival claims to the presidency caused ethnic massacres in which more than 1,200 died.

Annan put the rivals in a room and told them: “There is only one Kenya”. He helped persuade one of them to accept the post of prime minister in a joint government. The violence ended.

But earlier in his career, Annan’s record was less successful. He was head of UN peacekeeping in 1994, when he acknowledges he should have done more to help prevent the slaughter of 800,000 Rwandan Tutsis and moderate Hutus.

The greatest reproach was that Annan failed to act on a telegram from the UN peacekeeper commander, General Romeo Dallaire, urging a move against arms caches being built up by Hutu extremists as they prepared mass murder.

“I believed at that time that I was doing my best,” Annan said years later. “But I realised after the genocide that there was more that I could and should have done to sound the alarm and rally support.”

In a book scathing about the world’s failure to act, Dallaire had only praise for Annan, describing his “humanism and dedication to the plight of others”.

When his UN career ended in 2006, he listed his main achievements as establishing the concept of a responsibility to protect civilians when their rulers will not or cannot.

But his tenure was littered with diplomatic disasters.

His worst moments, Annan said, included not being able to stop the bloodshed in Sudan’s Darfur, the oil-for-food debacle and the Iraq war, after which he lost his voice for months.

The oil-for-food scandal broke in early 2004 when it emerged that Saddam Hussein had cheated the $64-billion programme designed to relieve the pain of UN sanctions on the Iraqi people. The sanctions were imposed after Baghdad’s troops invaded Kuwait.

While few UN officials were accused of enriching themselves, the world body was blamed for lax management and not blowing the whistle on Saddam’s tactics. Although Annan was cleared of wrongdoing, his son Kojo was found to have used UN contacts to his improper advantage.

Then came the most painful event – the bombing of UN headquarters in Baghdad on August 19, 2003, that killed 22 people after Annan had decided, at the urging of the US, to send senior UN staff back to Iraq, including his envoy Sergio Vieira de Mello, who was among the victims.

“It hit me almost as much as the loss of my twin sister,” Annan told his last news conference as secretary-general, his voice choking. Efua Annan died of an illness in 1991.

Annan was also at the helm at the time of the 1995 Srebrenica massacre in Bosnia, where insufficient UN peacekeeping forces again failed to stop the killing and during a fiasco in Somalia that preceded Rwanda.

His defenders say he tried to get enough troops and the big power support to make a difference in Bosnia and Rwanda. Critics argue that he was held back by respect for the limits he had learned in decades as a UN functionary.

At an event in April to mark his 80th birthday, Annan was defensive about his role in Rwanda, joked wryly about being mistaken for actor Morgan Freeman after retiring, and decried a lack of strong leaders to help handle crises.

“We have had difficulties in the past but in some cases leadership has made a difference,” he said, ending on an upbeat note: “I am a stubborn optimist, I was born an optimist and will remain an optimist. The moment I lose hope all is lost, I encourage you to keep hope as well.”