The Nigeria-Biafra war of 1967 to 1970 was both an outcome and a symptom of this configuration. 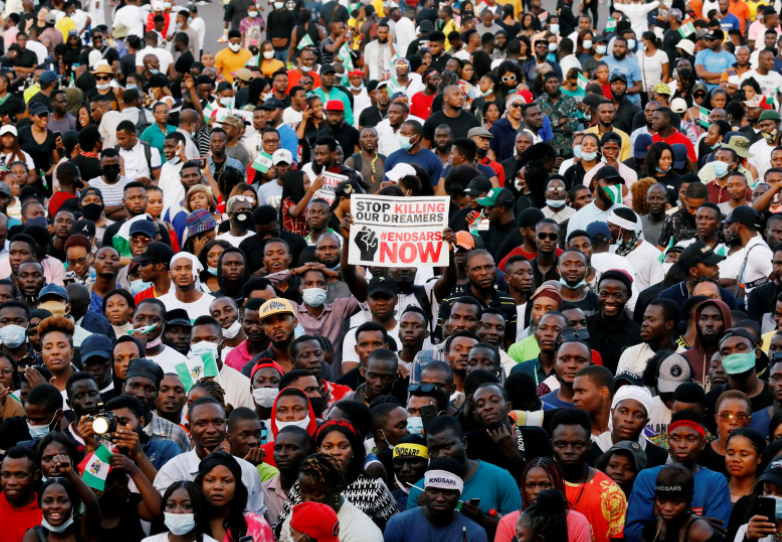 The Nigerian state is intricately laced with violent threads, woven into it by its colonial, military and ethnic setup.

The Nigeria-Biafra war of 1967 to 1970 was both an outcome and a symptom of this configuration. This violent setup of the state is partly why the Biafran question remains an open sore. It has engendered heated activism in the country by groups like the Indigenous People of Biafra whose activism has often collided with the firepower of the state.

The Igbos are one of three largest ethnic groups in Nigeria, situated in the southeast. Feelings of collective trauma and a lack of justice after the war have deepened their grievances and reinforced agitations for Biafra, which is both a contested geographic home for the Igbos and an ideology of resistance.

One of the worst outbreaks of violence was in 2016 when Nigerian security forces opened fire on protesters in Aba, Abia, an Igbo state in the southeastern part of Nigeria. Thirteen people died from gunshot wounds.

The government went on to ban the activities of the Indigenous People of Biafra led by their founder, Nnamdi Kanu. His messianic approach to the Biafran question has divided opinion. While many in the southeast support the Biafran cause, they are uncertain that violence in the form of another war of secession is the right way to go.

The sore that is Biafra is once again at the centre of tensions in Nigeria.

On June 1, 2021, President Muhammadu Buhari posted a tweet in response to the ongoing unrest in the southeast in which he promised punitive measures against Biafra supporters:

Many of those misbehaving today are too young to be aware of the destruction and loss of lives that occurred during the Nigerian civil war. Those of us in the fields for 30 months, who went through the war, will treat them in the language they understand.

The government reacted by declaring an indefinite suspension of Twitter in Nigeria.

Fifty-one years since the culmination of the war, it bears examining the current situation around the Biafran question. The Biafran state was birthed by a series of events starting with the January 1966 military coup. Two features stood out that were to be significant in the unfolding of future events.

First, it appeared that the coup had been led by young Igbo military officers. The second was that more political leaders of northern extraction were killed than other regions of the country.

General Aguiyi-Ironsi, an Igbo, foiled the coup and became the head of state. He transformed Nigeria into a unitary state from its federalist structure. This act, coupled with the fact that the coupists were detained and not immediately prosecuted, led to allegations that the January 1966 coup was an “Igbo plan” to consolidate power at the centre.

In May 1966, Igbos in some parts of northern Nigeria were attacked and numerous deaths were recorded. This was closely followed by a July 1966 counter coup that unseated Ironsi. It was led by soldiers who were predominantly of northern Nigerian extraction. Following the counter coup, the governor of the eastern region, Lt. Colonel Odumegwu Ojukwu, demanded a confederal system of government to give the Igbos and ethnic minorities some level of autonomy.

The inability of Ojukwu and General Yakubu Gowon (the then head of state) to reach a consensus on this issue, coupled with the killing of Igbos in northern Nigeria, became the immediate cause of the attempted secession of eastern Nigeria – Biafra.

As envisioned by its leaders, the Republic of Biafra was established with the intention of being

a new model for Africa … to fulfil the decolonising mission which the ‘still- born’ Nigeria failed to do.

Instead, Biafra was besieged and dislodged by the Federal Military Government in a 30-month war in which more than one million Igbo civilians were killed.

The war ended in 1970. But Nigerians have continued to witness a flurry of military despotism and the re-invigoration of ethnic politics.

Narratives of a war past

Gowon declared that post-war reconciliation policies would be underpinned by the idea of “No Victor, No Vanquished”. With this decree, a singular worldview was enforced to “bind up the nation’s wounds”.

But little reconstruction took place in the affected and dilapidated Igbo communities. As a result, many Igbos remember the war with wrenching bitterness. They also bemoan the failure of the government to address some of the conditions pre-existing the war. These include an imbalanced ethnic power structure at the centre and a militarised state.

The hallmark reaction to the state structure has been violence. The activities of Boko Haram, and “unknown gunmen” who have turned kidnapping for ransom into a lucrative business, are prime examples. These violent non-state actors appear to act with impunity.

The feeling of desertion by the central government has never left Biafra. As recently as this year, the Indigenous People of Biafra created an armed security outfit with the aim of fighting off attacks by “unknown gunmen” who are often blamed for instigating communal unrest.

Tension flared up within the Igbo community after federal troops were dispatched to crack down on the Indigenous People of Biafra’s armed unit.

The clashes have, once again, reignited serious debate about the viability of “one Nigeria”.

There have been calls for a restructuring to true federalism and revamping the country’s constitution. This could allow the different regions in the country to be semi-independent and still function as a single unit.

Yet, there’s no guarantee that regionalism – or a new constitution – would address the many structural challenges in the country, particularly the militarisation of the state and ethno-religious politics. The situation is so dire that some people have concluded that Nigeria has failed as a state.

On the whole, realising new ways of co-existing may best be achieved when a sense of stability has been restored, and people can express their freedom of speech, movement and association.

Pressing questions about identity, justice and a sense of belonging need to be resolved through negotiations. This outcome could prove more durable.

Finally, the Buhari government’s response to the Twitter issue once again raised questions about whether its modus operandi is simply to rely exclusively on brute force. In this context, the agitations of groups like pro-Biafra could be seen as providing an ideological impetus to a set of beliefs in justice and fairness rather than a mere force for ethnic mobilisation.

There are still those who lived through the Nigeria-Biafra war, and as long as memories remain, there will be questions about accountability and justice. Beyond this is the realisation that the Igbo or Biafran question is the Nigerian question. This calls for a reassessment of how the country is governed.