Two others of Indian origin are also missing, sources said. 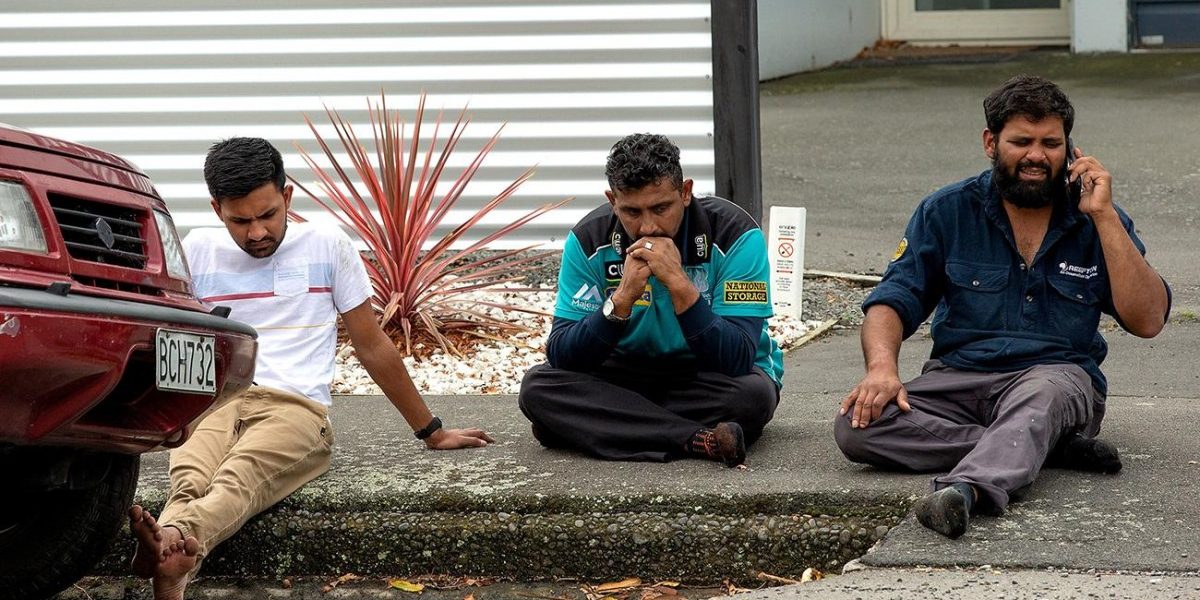 New Delhi: Five Indians are reportedly still missing and two injured after shooters attacked two mosques in the New Zealand city of Christchurch on Friday. Two others of Indian origin are also missing, sources in the government told The Wire.

The Indian high commissioner to New Zealand confirmed this in a tweet later in the day.

Hv been pursuing info on whereabouts of 9 persons from NZ authorities, these included 7 indian nationals and 2 PIOs. Two indian nationals receiving treatment. Folowing up with NZ Govt. status of others. Also r in regular touch with their families

On Friday evening, the Indian high commissioner to New Zealand had said that nine Indians were missing.

Forty nine people have been reported killed so far, and 20 others have been seriously injured. New Zealand police said they have taken four persons into custody – three men and one woman.

“This is one of New Zealand’s darkest days,” said Prime Minister Jacinda Ardern. “Clearly what has happened here is an extraordinary and unprecedented act of violence.” Ardern said New Zealand had been placed on its highest security threat level. She said the four people in police custody held extremist views, but had not been on any police watchlists.

In the afternoon on Friday, Sanjiv Kohli, the High Commissioner of India to New Zealand had tweeted that nine persons of Indian origin are missing, but official confirmation is still awaited.

As per updates received from multiple sources there are 9 missing persons of indian nationality/ origin. Official confirmation still awaited. Huge crime against humanity. Our prayers with their families

According to sources, New Zealand authorities are still reacting to the shooting, so there is not yet clarity on the number of victims yet.

The Indian high commission has been contacted by friends and families over missing persons. The list of names is based on local contacts and hospital sources. A clear picture about the victims are only likely on Saturday, as per diplomatic sources.

In New Delhi, Ministry of External affairs spokesperson, Raveesh Kumar, was cautious. “Our Mission is in touch with local authorities to ascertain more details. It is a sensitive matter and therefore we can’t give confirmed numbers/names till we are absolutely certain,” he said.

A statement released by the Indian government said that prime minister Narendra Modi had expressed his deep shock at the terrorist attack at “places of worship” in Christchurch in a letter to the New Zealand prime minister.

In the letter, the statement said, he “underscored India’s solidarity with the friendly people of New Zealand at this difficult time”.

All India Majlis-e-Ittehadul Muslimeen (AIMIM) party president Asaduddin Owaisi tweeted that the brother of a Hyderabad resident was injured in the shooting.

A video from #ChristChurch shows one Ahmed Jehangir who was shot. His brother Iqbal Jehangir is a resident of Hyderabad & would like to go to NZ for Ahmed’s family.

There has been strong reaction among the Indian community in New Zealand against the shooting.

Such tragedy, unbelievable this is happening in NZ. Don’t let not this atrocious and senseless act of hatred overtake our determination to be a ethnically diverse country – Let it be our strength to stand stand by side in defeating violence. Our heart goes out to Christchurch.

We stand with the people of Christchurch in this hour of need and extend our condolences to the families of the bereaved.

An Indian association in the New Zealand capital announced that the temple would be closed as a precautionary measure.

The Indian diaspora in New Zealand are around 200,000 strong, out of which around 75,000 are Indian passport holders. An Indian association in the New Zealand capital announced that the temple would be closed as a precautionary measure.

Witnesses told media that a man dressed in a military-style, camouflage outfit, and carrying an automatic rifle had started randomly shooting people in the Al Noor mosque. Thirty people were killed here. Ten others were killed at a Linwood Avenue mosque.

The Bangladesh cricket team was arriving for prayers when the shooting occurred but all members were safe, a team coach told Reuters.

Video footage widely circulated on social media, apparently taken by a gunman and posted online live as the attack unfolded, showed him driving to one mosque, entering it and shooting randomly at people inside.

Worshippers, possibly dead or wounded, lay huddled on the floor of the mosque, the video showed. Reuters was unable to confirm the authenticity of the footage.

One man who said he was at the Al Noor mosque told media the gunman was white, blond and wearing a helmet and a bulletproof vest. The man burst into the mosque as worshippers were kneeling for prayers. Emergency services personnel transport a stretcher carrying a person at a hospital, after reports that several shots had been fired, in central Christchurch, New Zealand March 15, 2019, in this still image taken from video. Credit: TVNZ/via Reuters TV

“He had a big gun … he came and started shooting everyone in the mosque, everywhere,” said the man, Ahmad Al-Mahmoud. He said he and others escaped by breaking through a glass door.

New Zealand’s police commissioner Mike Bush earlier said “as far as we know” multiple fatalities occurred at two mosques. Police had one person in custody but they were not sure if others were involved, and people should stay away from mosques.

Police said earlier they were hunting “an active shooter” in the centre of Christchurch city.

“A serious and evolving situation is occurring in Christchurch with an active shooter,” Bush said.

“Police are responding with its full capability to manage the situation, but the risk environment remains extremely high.”

Media reported that a gunman opened fire inside a mosque in Christchurch’s Hagley Park district. There were reports of armed police at a second mosque in the suburb of Linwood. 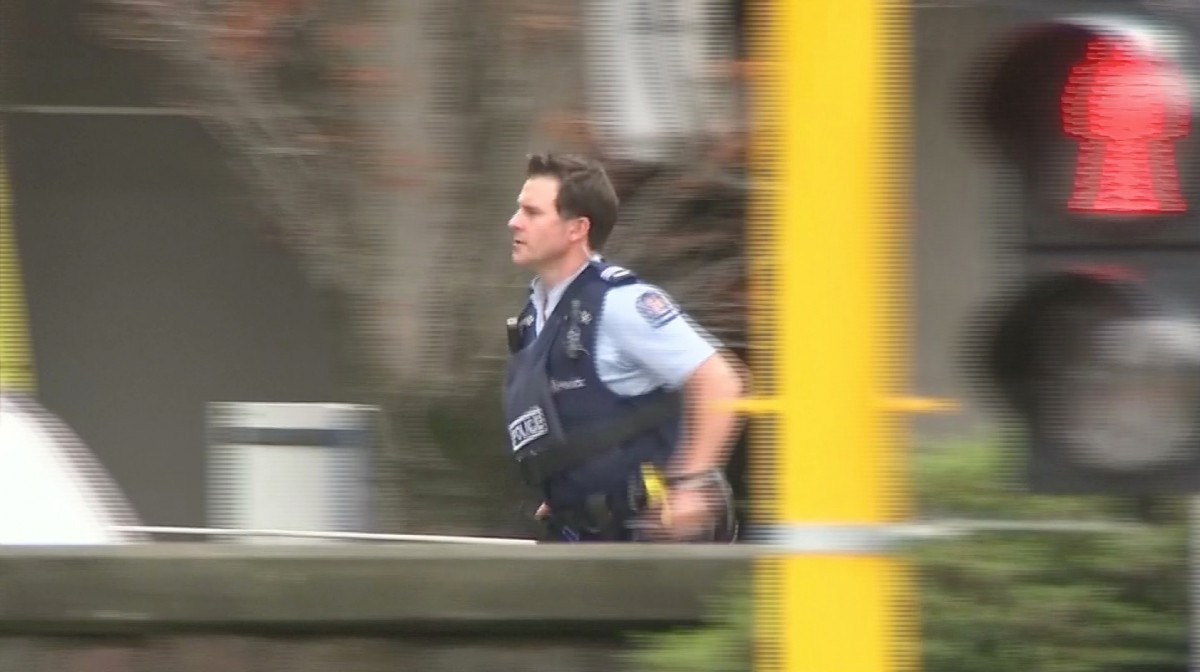 A police officer is seen after reports that several shots had been fired at a mosque, in central Christchurch, New Zealand March 15, 2019, in this still image taken from video. Credit: TVNZ/via Reuters TV

People in the centre of the city should stay indoors, police said. All Christchurch schools and council buildings have been placed into lockdown.

Radio New Zealand quoted a witness inside the Al Noor mosque saying he heard shots fired and at least four people were lying on the ground and “there was blood everywhere”.

“Horrified to hear of Christchurch mosque shootings. There is never a justification for that sort of hatred,” said Amy Adams, a member of parliament from Christchurch.

The Bangladesh cricket team is in Christchurch to play New Zealand in a third cricket test starting on Saturday.

“They were on the bus, which was just pulling up to the mosque when the shooting begun,” Mario Villavarayen, strength and conditioning coach of the Bangladesh cricket team, told Reuters in a message.

“They are shaken but good.”

Muslims account for just over 1% of New Zealand’s population, a 2013 census showed.

“Many of those who would have been affected by this shooting may be migrants to New Zealand,” Ardern said.

“They may even be refugees here. They have chosen to make New Zealand their home and it is their home … they are us. The persons who has perpetuated this violence against us … have no place in New Zealand.”