"Are you with anarchist groups?" was one typical question. "Are you in Antifa?" was another. 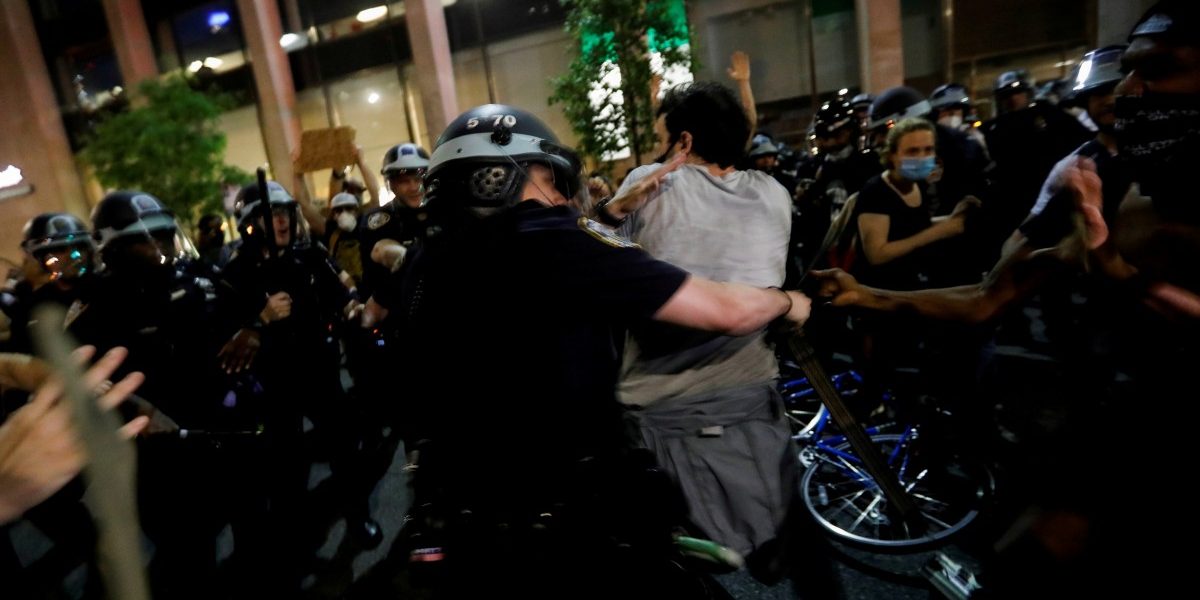 A man scuffles with law enforcement officers during a protest against the death in Minneapolis police custody of George Floyd, in the Brooklyn borough of New York City, U.S., June 3, 2020. Photo: Reuters/Brendan Mcdermid

New York: “Are you with anarchist groups?” was one typical question. “Are you in Antifa?” was another.

A group of lawyers say New York City police and federal agents may have violated a longstanding order limiting their investigations of a person’s political beliefs by asking these and other questions of some protesters detained last week for violating an 8 p.m. curfew.

This could run afoul of the U.S. Constitution’s protection of freedom of political expression, the lawyers said in a letter to the New York Police Department’s legal counsel, seeking information about the interrogations.

“Where police forces are allowed to maintain files about people’s politics, it leads to fascistic control or attempts to control the population,” said Martin Stolar, one of the lawyers who signed the letter. “It’s the privacy of thought. If you erode that, you are in very dangerous territory.”

Also read: The Taking Down of the Colston Statue Should Make Indians Confront Our Own Past and Present

Stolar and his colleagues cited a 1985 federal court order aimed at ending an NYPD practice of building dossiers on political dissidents, which sharply curtails how police gather information on people’s political or religious beliefs.

Stolar was one of the original lawyers involved in securing the court order, known as the Handschu consent decree, as part of the settlement of a 1971 class-action lawsuit that has remained active ever since in order to ensure compliance.

The city’s Law Department, which represents the NYPD in litigation, said it was examining the concerns.

“The NYPD is committed to adhering to the Handschu Guidelines,” department spokesman Nicholas Paolucci wrote in an email.

Officers from the NYPD’s Intelligence Bureau questioned about 100 out of about 1,000 people arrested between June 1 and June 4 in connection with nationwide protests over the police killing of George Floyd in Minneapolis on May 25, said Mary Frances O’Donnell, a police department spokeswoman.

“The interviews sought to determine if there was communication between, or coordination, with anarchists and looters,” she wrote in answers in Reuters’ questions.

The interviews were conducted “after two nights of widespread looting, attacks on police officers resulting in injuries, and the vandalism of 235 police vehicles including 16 which were set on fire,” she wrote.

She declined to answer questions about the Handschu guidelines and the role of the Federal Bureau of Investigation.

FBI officials in New York and Washington declined to comment.

Stolar helped file the original lawsuit that gave rise to the Handschu order, which contended that the police department had been amassing secret dossiers on black power activists, anti-Vietnam War protesters and other dissidents.

Under the order, the NYPD agreed that it could only investigate someone’s political activity if it had “specific information” that he or she had committed a crime, or were planning to.

Such investigations can only be carried out by the department’s Intelligence Bureau with authorization by senior police officials and must be reported to an oversight committee that includes a civilian lawyer appointed by the mayor.

In recent years, the order has been used to bring legal challenges against the NYPD’s questioning of protesters marching against the U.S. invasion of Iraq in 2003 and the department’s surveillance of Muslims after the Sept. 11, 2001, attacks.

Both New York City Mayor Bill de Blasio, a Democrat, and U.S. Attorney General Bill Barr, a Republican, have said that a small number of anarchists, Antifa or other leftists harmed the nationwide protests by trying to stoke violence.

Antifa refers to a nebulous international anti-fascism movement whose adherents seek to dismantle entities they see as racist or anti-Semitic.