Can Istanbul's New Mayor Usher in Changes in Erdogan's Stronghold?

There is speculation, thus far dismissed by Imamoglu, that the 49-year-old could use Istanbul as a platform to challenge Erdogan nationally as the CHP’s future presidential candidate.

Istanbul: Through his 16 years in power, Turkish President Tayyip Erdogan has been able to rely on the pious electorate of Istanbul’s Eyup district, where for centuries Ottoman sultans received their ceremonial sword after ascending to the throne.

But on Sunday, it turned its back on his Islamist-rooted AK Party (AKP) for the first time since 2002 and helped opposition candidate Ekrem Imamoglu become mayor – a historic reverse that could also spell trouble for Erdogan in Turkey’s Anatolian heartland, where his grip on power could also be vulnerable.

Several voters in Eyup who ditched the AKP criticised Erdogan’s campaign rhetoric as divisive and – perhaps more alarming for the president as the country grapples with economic hardship and a debilitating row with the US – praised Imamoglu’s strong rapport with Turks of all kinds.

“Imamoglu has a stance which is more embracing of society. He opened himself up and accepted everyone with encompassing and constructive language,” said retired teacher Ahmet Cetin, 57, adding that he and his wife used to back the AKP.

The abrupt turnaround in Eyup, where Imamoglu – a practising Muslim but belonging to the secularist Republican People’s Party (CHP) – took 54% of the vote, was mirrored in other traditional AKP strongholds across the city.

There is speculation, thus far dismissed by Imamoglu, that the 49-year-old could use Istanbul as a platform to challenge Erdogan nationally as the CHP’s future presidential candidate.

Cetin said that, if he was to build on his election success, Imamoglu needed above all to retain affinity with voters in Anatolia, the territory in Asia that makes up most of Turkey and where people are more conservative.

For one such Eyup voter, Ayse Esintokan from Kahramanmaras in southern Turkey, he is already doing that.

“We like the way he speaks, as someone from Anatolia like us. He speaks like one of the people and mixes with them,” she said outside her spices store.

Due to take office on Thursday after 25 years of rule by the AKP and its Islamist predecessors, Imamoglu was little known across Turkey three months ago.

He narrowly won an initial election in March that was annulled after AKP appeals, setting up Sunday’s re-run which gave him a decisive victory. 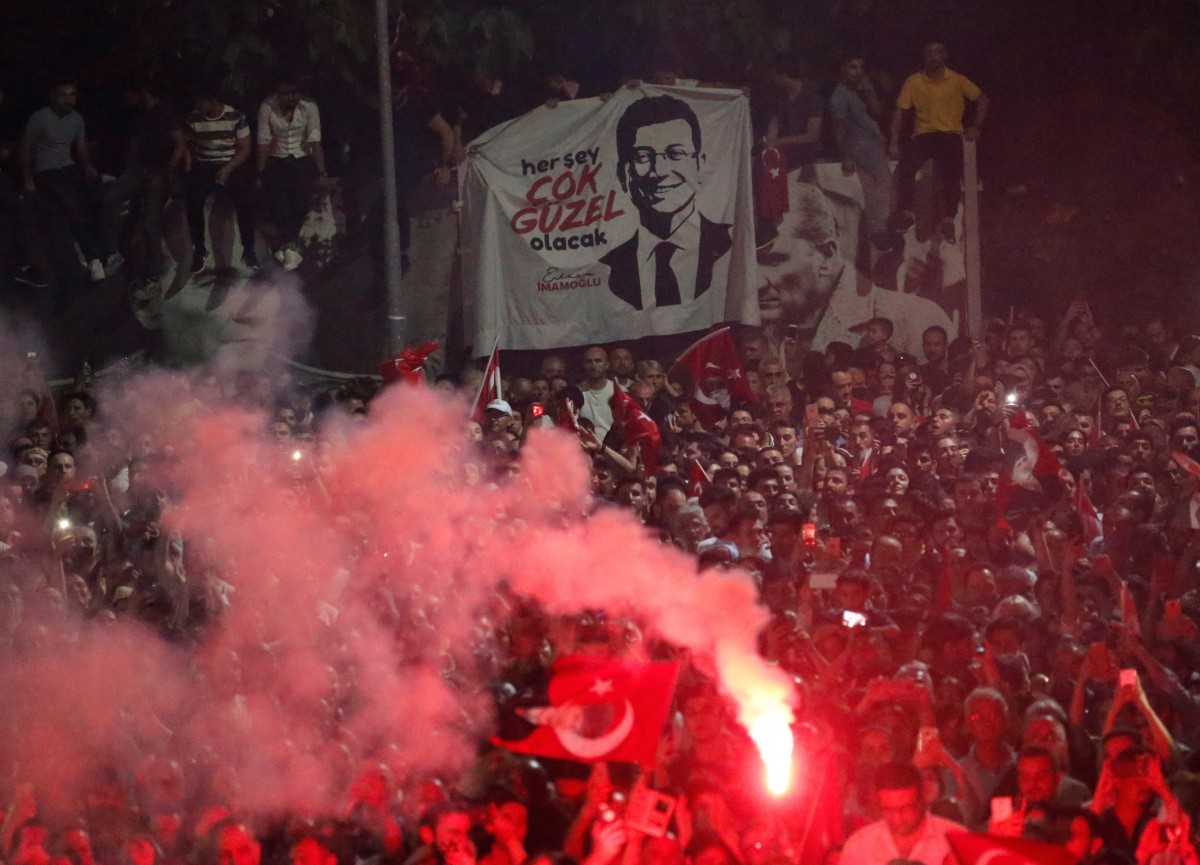 Many of Istanbul’s 15 million residents have roots elsewhere in the country and, after carrying a sense of injustice through a campaign in which he sought to bridge divides between devout and secularist voters, he now shoulders the expectations of a long lacklustre opposition.

Esintokan said whether Imamoglu would be equal to the task would depend on him maintaining a distance from the CHP’s traditional secularist stance. “He can achieve success if he goes on his own path,” she said.

She and others criticised CHP leader Kemal Kilicdaroglu as divisive and polarising – an accusation also commonly levelled at Erdogan.

If he “can maintain that old embracing style of the Anatolian people he will succeed. But if he returns to the old CHP it can end with a CHP fiasco,” he said while walking with his wife near the Eyup Sultan Mosque.

Imamoglu prayed there after his win in March, and its origins date back to the Ottoman conquest of Istanbul in 1453. It contains a mausoleum marking the spot where the Prophet Mohammad’s standard bearer is said to be buried.

While some praised the new mayor’s campaign style, others among the 10 voters whom Reuters spoke to worried that Erdogan – himself a former Istanbul mayor and who prayed at the same mosque on the eve of Sunday’s election – was being unfairly dismissed.

Shopkeeper Zulkarni Okunus, 57, said voters had either ignored Erdogan’s achievements in developing Turkey or were too young to appreciate them.

“The people showed ingratitude,” he said as he drank tea with friends at a table outside his shop. “Imamoglu does not have any successes. Nobody knows him.”

Yet Erdogan’s campaigning style alienated others, who noted a contradiction in him accusing the opposition of terrorism links and then highlighting a call by jailed Kurdish militant leader Abdullah Ocalan for the pro-Kurdish party to remain neutral in the vote.

“Who cooperated with the terrorists in the last three days of the election? People are not stupid,” said women’s hairdresser Cemil Canbayraktar, 37, who had supported the AKP in the past.

“The president came from this municipality in his time,” he added. “Ekrem Imamoglu is now going through the same thing and there will be better and greater days. All the people believe this.”