The plan was condemned by Arab League ministers who said it would undermine any chance of progress towards Israeli-Palestinian peace. 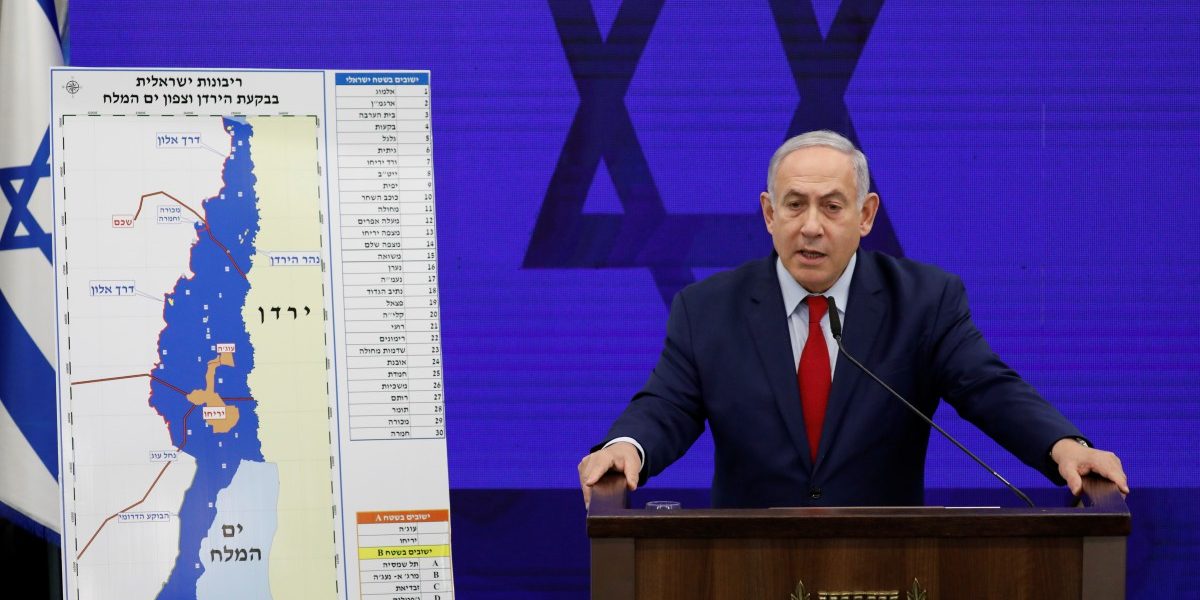 Jerusalem: Israeli Prime Minister Benjamin Netanyahu announced his intention on Tuesday to annex the Jordan Valley, a large swathe of the occupied West Bank, if he wins a closely contested election just a week away.

Palestinian President Mahmoud Abbas said in a statement that “all signed agreements with Israel and the obligations resulting from them would end” if Netanyahu went through with the move.

Israel captured the West Bank in a 1967 war and Palestinians, who signed interim peace deals with Israel in the 1990s that include security cooperation, seek to make the area part of a future state.

Israeli political commentators saw Netanyahu‘s declaration, in a speech broadcast live on Israel’s main TV channels, as a bid to siphon support away from far-right rivals who have long advocated annexation of Jewish settlements in the West Bank. 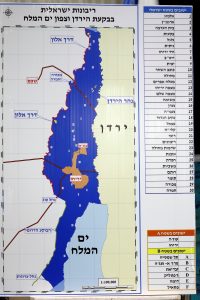 A map which Netanyahu showed as he delivered his statement. Photo: Reuters/Amir Cohen

“Today, I announce my intention, after the establishment of a new government, to apply Israeli sovereignty to the Jordan Valley and the northern Dead Sea,” Netanyahu said in a speech broadcast live on Israeli TV channels, calling the area “Israel’s eastern border”.

That step, he said, could be taken “immediately after the election if I receive a clear mandate to do so from you, the citizens of Israel”.

Around 65,000 Palestinians and 11,000 Israeli settlers live in the Jordan Valley and northern Dead Sea area, according to the Israeli human rights group B’Tselem. The main Palestinian city is Jericho, with around 28 villages and smaller Bedouin communities.

Fighting for his political life after an inconclusive election in April, Netanyahu also reaffirmed a pledge to annex all of the settlements Israel has established in the West Bank. But he said that broader step could take longer and required “maximum coordination” with Washington, Israel’s close ally.

“Out of respect for President Trump and great faith in our friendship, I will await applying sovereignty until release of the president’s political plan,” he said, referring to a long-awaited blueprint from Washington for Israeli-Palestinian peace.

The US plan, Netanyahu reiterated, would likely be presented very soon after Israel goes to the polls on September 17. Netanyahu, head of the right-wing Likud party and in office for the past decade, failed to form a governing coalition following a national ballot in April.

“There is no change in United States policy at this time,” a Trump administration official said when asked whether the White House supported Netanyahu‘s move.

“We will release our Vision for Peace after the Israeli election and work to determine the best path forward to bring long sought security, opportunity and stability to the region.”

In an interview with the New York Times in June, US ambassador to Israel David Friedman said that “under certain circumstances” Israel has the “right to retain some, but unlikely all, of the West Bank”. 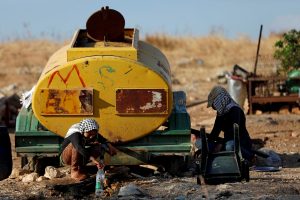 Palestinians fill bottles with water from a tank in Jordan Valley in the Israeli-occupied West Bank on August 21, 2019. Photo: Reuters/Mohamad Torokman/File Photo

Hanan Ashrawi, a senior official in the Palestine Liberation Organisation, said on Twitter after Netanyahu‘s announcement that the Israeli leader was out to impose a “greater Israel on all of historical Palestine and (carry) out an ethnic cleansing agenda”.”All bets are off. Dangerous aggression. Perpetual conflict,” she wrote.

Netanyahu’s cheap pandering to his extremist racist base exposes his real political agenda of superimposing “greater Israel” on all of historical Palestine & carrying out an ethnic cleansing agenda. All bets are off! Dangerous aggression. Perpetual conflict.

Israeli-Palestinian peace talks collapsed in 2014 and Palestinians have called Trump’s proposal dead in the water, even before its publication, citing what they see as his pro-Israel policies.

Last March, just before Israel’s previous election, Trump – in a move widely seen as an attempt to bolster Netanyahu – recognised Israel’s 1981 annexation of the Golan Heights, captured from Syria in the 1967 conflict.

“It’s an election stunt and not a very impressive one because it’s so transparent,” Yair Lapid, co-leader of the centrist Blue and White Party, said in a statement about Netanyahu‘s plan.

The Jordan Valley, which Palestinians seek for the eastern perimeter of a state in the West Bank and Gaza Strip, stretches from the Dead Sea in the south to the Israeli city of Beit Shean in the north.

The 2,400 square km (926.65 square mile) valley accounts for nearly 30 percent of the territory in the West Bank. Israel has long said it intends to maintain military control there under any peace agreement with the Palestinians.