Until a few weeks ago, investigators had made what critics attacked as scant progress. But since then, there has been a flurry of arrests and ministerial resignations and the prime minister is under pressure to resign. 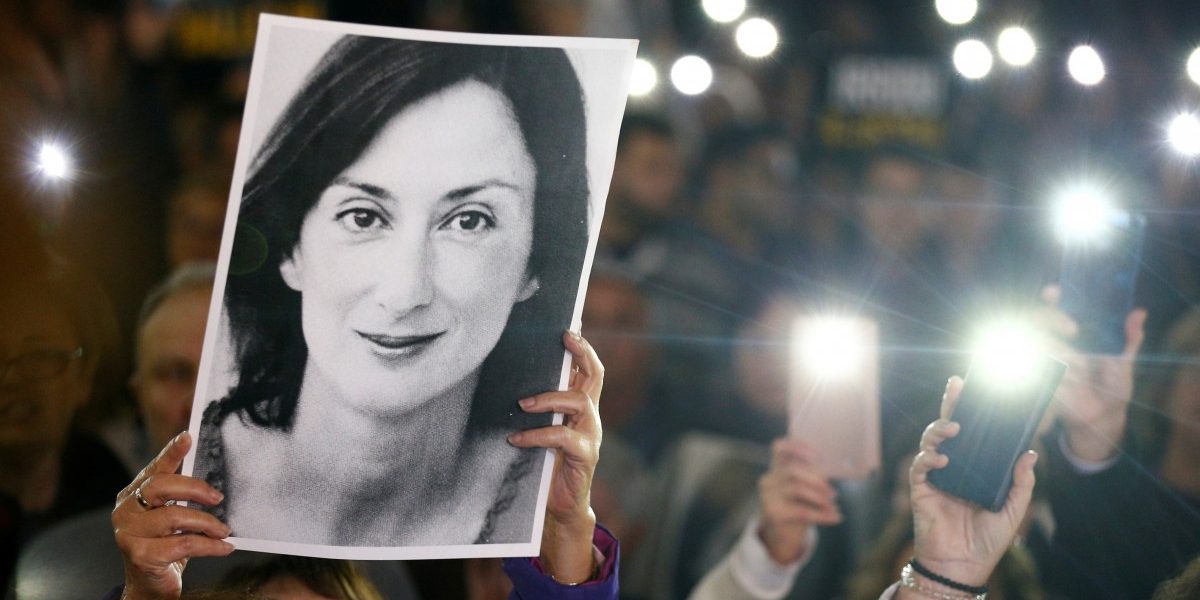 File Photo: People gather at the Great Siege Square calling for the resignation of Joseph Muscat following the arrest of one of the country's most prominent businessmen as part of the investigation into the murder of journalist Daphne Caruana Galizia, in Valletta, Malta November 20, 2019. Photo: Reuters/Guglielmo Mangiapane/File Photo

Bratislava: Press freedom campaigners and journalists in Malta are hoping they could soon see justice for murdered Maltese journalist Daphne Caruana Galizia – and that a powerful message will be sent across Europe that a free press can deny corrupt officials the power to act with impunity.

Caruana Galizia, Malta’s most prominent investigative journalist, was killed by a car bomb in October 2017 outside her home in the village of Bidnija. Her investigations had exposed high-level government corruption linked to businesses.

Until just a few weeks ago, investigators had made what critics attacked as scant progress in bringing her killers to justice. But since then there has been a flurry of arrests and ministerial resignations and the Prime Minister, Joseph Muscat, is under pressure to resign.

And with a key figure in the case now reportedly giving investigators vital information on who was involved in the killing, many are hoping that the person who ordered the murder could soon be identified, paving the way for prosecutions and opening up a new chapter in press freedom in Malta and sending a message to other countries.

“Things are moving fast in Malta, so we are hopeful that there may be a resolution to this soon,” said Pauline Ades-Mevel, Head of the European Union and Balkan Desk at global press freedom watchdog Reporters Without Borders (RSF).

“If the mastermind and hitman and middleman were to be prosecuted, if the case were to be solved, it would have an enormous impact on press freedom in Malta.

“But it would also send an equally powerful signal to countries across Europe because it would show that journalists and organisations like ours are the stone in the shoe of people who think they can act with impunity. They cannot get rid of us,” she told IPS.

Caruana Galizia’s murder made headlines across the world not only because it focused attention on the rule of law in Malta but because it took place in an EU country.

Groups like RSF have warned in recent reports that Europe is “no longer a sanctuary” for journalists and there has been a documented rise in attacks on journalists and an erosion of press freedom across the continent in recent years.

Like Caruana Galizia, Kuciak had investigated alleged corruption at the highest levels of government and had been working on a story about ties between the Italian mafia and Slovak politicians at the time of his death.

Protests in the wake of the killing led to the resignation of the then Prime Minister, Robert Fico, while a subsequent police investigation has led to a prominent local businessman, Marian Kocner, being charged with ordering Kuciak’s assassination.

A few months after Caruana Galizia’s killing, three men were arrested and charged with planting the bomb that killed her. But two years after her murder they had not faced trial, nor had anyone else been arrested in connection with the murder.

The authorities’ handling of the case and efforts to bring her killers to justice had been criticised, not least by her family, with questions raised over the arrest of the three men.

The Maltese government agreed to launch a public inquiry in October under pressure from the Parliamentary Assembly of the Council of Europe (PACE).

But local journalists questioned the independence of the enquiry, citing potential conflicts of interest among its senior board members.

Meanwhile, on the two-year anniversary of her death, RSF released a report saying the situation for journalists in Malta was ‘dire’ – a claim the Maltese government publicly dismissed at the time – and noted that Malta had dropped 30 places in its World Press Freedom Index since 2017.

“It is very difficult to do investigative journalism in Malta, the journalists who are doing it are working under pressure, conditions are difficult,” Ades-Mevel told IPS.

But this month has seen dramatic and rapid developments in the case with the arrest of Yorgen Fenech, a powerful local businessman, and the subsequent resignation of the head of the Prime Minister’s Office, Keith Schembri, in the murder.

Tourism Minister Konrad Mizzi and Economy Minister Chris Cardona have also stepped down since Fenech’s arrest. Following the release of the Panama Papers in 2016 Caruana Galizia had accused Mizzi and Fenech of corruption linked to ownership of secret shell companies in Panama.

Muscat and Schembri are close friends and the Prime Minister, who is still pursuing libel claims against the dead journalist and her family after she accused him of corruption, had repeatedly rejected calls to sack Schembri when allegations of corruption first emerged years ago.

Schembri was arrested earlier this week amid suggestions Fenech had provided evidence implicating in the murder. But he was released – to the fury of opposition politicians and protestors who claimed he was being protected by the Prime Minister – soon after without charge.

Protests in the capital Valletta in recent days have drawn tens of thousands calling for the Prime Minister to step down.

Muscat has said that he will not leave office until the people who ordered the killing have been identified.

He has also, in stark contrast to police officials or the attorney general, made daily statements on the latest developments in the Caruana Galizia case, including about possible pardons.

This has raised concerns about political interference in the investigation and in a joint statement, ten international press freedom organisations, including the Committee to Protect Journalists (CPJ), RSF, and the European Centre for Press and Media Freedom (ECPMF), echoed demands made by PACE that Muscat step away from the investigation.

“Malta has clear legal obligations to ensure an independent, impartial investigation into the assassination of its leading journalist, Daphne Caruana Galizia. There must be no executive interference in the investigation,” the groups wrote.

“What is worrying is that for the last week the only person who has been commenting on what is going on is the Prime Minister. By putting himself at the centre of the investigation, there is a risk of political interference in the investigation,” Ades-Mevel told IPS.

It is unclear at the moment whether the Prime Minister will clearly step back from the investigation or whether any further arrests are imminent. Further public protests are already planned, however.

In the meantime, some local journalists are cautiously optimistic over the path of current events in Malta.

“There is hope that there could finally be justice for Daphne. Protestors are demanding the Prime Minister step down, and they are also demanding that justice is done and seen to be done,” said Nigel Mifsud, General Secretary of the Institute of Maltese Journalists.

“But this is all in the early stages of the investigation,” he told IPS.

What is clear though is that many people now believe the claims, made by journalists like Caruana Galizia, of corruption at the highest levels.

In a statement earlier this week Malta’s Chamber of Commerce said that “the extent to which criminal activity had infiltrated the circles of power and operated unperturbed for years” was now clear.

“What Daphne wrote about and alleged is being proved now to be true,” said Mifsud. “It has been proved that the work she was doing and the claims she made were correct.”

He added: “One thing I believe all this will do is that that journalists will gain in credibility and social standing here. If this is hopefully resolved, people will see that what journalists do is useful, it brings results. It will also show that people cannot act with impunity and that there will be journalists there to keep a check on them.”

He also said that if the investigation continues and the person who ordered the killing is brought to trial and convicted, it could help press freedom in other countries.

“I hope that what is happening here could be a positive example for other countries.

“Some people said that we would never even get to this stage, that the murder would never be solved. The fact that we have even got to this stage now is something and journalists in other countries can look and see that what they are doing is worthwhile, that their work and investigations can bring results.”