"The people in the village only have crossbows and there are a lot of casualties on the people's side," a resident told Reuters. 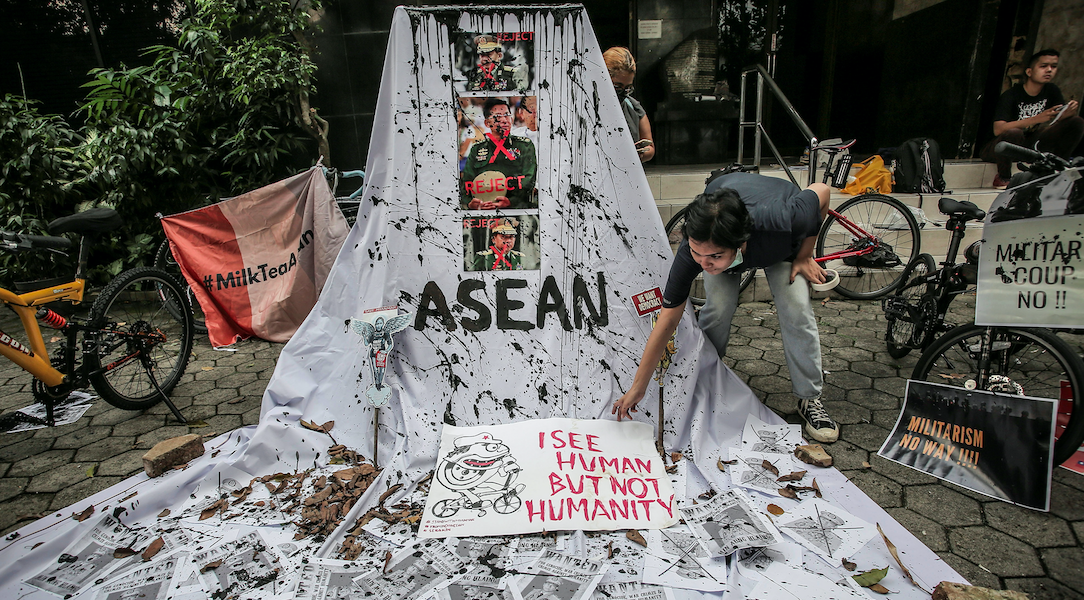 Myanmar‘s security forces clashed with villagers armed with catapults and crossbows during a search for weapons in the Ayeyarwady river delta region on Saturday. Local media reported as many as 20 people to have been killed.

State television news said three “terrorists” had been killed and two arrested at the village of Hlayswe, as security forces went to apprehend a man accused of plotting against the state.

A junta spokesman did not answer calls from Reuters to request comment on the violence at the village in the Kyonpyaw township of Ayeyarwady Region. Reuters was unable to confirm the toll independently.

The army has struggled to impose control since it overthrew elected leader Aug San Suu Kyi, after a decade of democratic reforms had opened up the once isolated state.

A meeting between junta leader Min Aung Hlaing and envoys from the Association of Southeast Asian Nations (ASEAN) on Friday drew anger in parts of Myanmar on Saturday, with an ASEAN flag being set ablaze in the second city of Mandalay.

Clashes broke out before dawn on Saturday at Hlayswe, some 150km northwest of the main city of Yangon, when soldiers said they had come to search for weapons, a resident and at least four local media outlets said.

“The people in the village only have crossbows and there are a lot of casualties on the people’s side,” said the resident, who asked not to be identified for fear of retribution.

Khit Thit Media and the Delta News Agency said 20 civilians had been killed and more wounded. They said villagers had tried to fight back with catapults after soldiers assaulted residents in what they said was a search for arms.

MRTV state television said security forces had come under attack with compressed air guns and darts. After the shootout, the bodies of three attackers had been found, it said.

If confirmed, the toll given by the local media would be the highest for one day in nearly two months. Some 845 people had previously been killed by the army and police since the February 1 coup, according to an activist group. The junta disputes that figure.

It was some of the worst violence since the coup in the Ayeyarwady region, an important rice growing area that has large populations of both the Bamar majority ethnic group, from which much of the army is drawn, and the Karen minority.

Since the coup, conflicts have flared in the borderlands where some two dozen ethnic armies have been waging insurgencies for decades. The junta has also been faced with daily protests and paralysing strikes.

The anti-junta Shwegu People’s Defence Force said it had attacked a police station in northern Shwegu late on Friday together with the Kachin Independence Army (KIA).

Reuters was unable to reach the KIA for comments.

In eastern Myanmar, the Mobye People’s Defence Force (MBPDF) said it had clashed with the army on Friday and four “terrorist soldiers” had been killed.

Despite the turmoil, Myanmar‘s army has shown little sign of heeding calls from its opponents to relinquish its hold. This week, the junta received its first high-profile foreign visitors – the head of the International Committee of the Red Cross and the two ASEAN envoys.

An underground opposition government set up by opponents of the junta said after the envoys’ visit on Friday it had lost faith in ASEAN’s attempts to end the crisis – the main international effort to resolve it.

Protesters in Myanmar‘s second city of Mandalay burned an ASEAN flag on Saturday and accused the group of giving legitimacy to the junta. One placard said “ASEAN way just means standing by uselessly”.