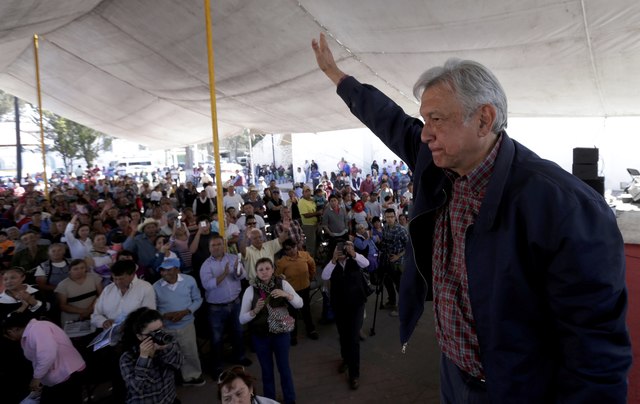 Mexico City: Mexico’s home-grown populist Andres Manuel Lopez Obrador has tapped into wide discontent with the ruling party and resentment toward Donald Trump to make a bid for the centre ground, raising his chances of winning the presidency next year.

The approval ratings of President Enrique Pena Nieto, from the Institutional Revolutionary Party (PRI), have been battered to as low as 12% by anaemic economic growth, rising fuel prices and his failure to tame endemic graft.

And with US President Trump threatening protectionist steps against Mexico to boost US jobs and a border wall to deter illegal immigration, as well as inflation on the rise and gang violence surging at home, conditions favour Lopez Obrador, the runner-up in Mexico’s past two presidential votes.

Lopez Obrador’s folksy brand of leftist, Mexico-first rhetoric has put the former Mexico City mayor out front in opinion polls for the 2018 presidential election and at the forefront of popular resistance to Trump.

A victory for Lopez Obrador would mark a historic leftward shift in Mexico, Latin America’s second-largest economy, where centrist technocrats have held sway for decades, and could complicate relations with top trade partner the US.

“I voted for (Pena Nieto) in 2012, but it’s been like when your boyfriend promises you the stars – and then nothing,” she said. Next time, she added, she was planning to vote for Lopez Obrador. “I think he will bring about change.”

Capitalising on the discontent, the veteran politician and longstanding US critic travels to the US on Sunday to support Mexican migrants and burnish his nationalist credentials with a message of cross-border solidarity.

Known as AMLO, the silver-haired 63-year-old made headlines after the 2006 presidential vote when he brought parts of the capital to a standstill with mass protests, saying he had been robbed of victory by centre-right candidate Felipe Calderon.

Recently, though, the Mexican establishment’s favourite bogeyman has moderated his rhetoric, hammering home his anti-corruption message and courting sections of the middle class who equate him with Hugo Chavez, Venezuela’s former leftist leader.

Top aides consulted by Reuters struck a pro-market, free trade tone, touting what they call Lopez Obrador’s newfound maturity, which includes support for Pena Nieto’s stance against Trump. Those messages have calmed concerns of some Wall Street investors, such as Goldman Sachs.

Although he fought against Pena Nieto’s divisive 2013 opening of Mexico’s oil and gas market, which ended the state’s energy monopolies, Lopez Obrador now suggests he could allow it to stand, but he would put the matter to a referendum. Pledging to run a tight budget without raising taxes, he defends the North American Free Trade Agreement (NAFTA) that Trump has threatened to tear up. The NAFTA deal has long been a target of Mexico’s left, but that position has changed given the potential for economic upheaval if Trump follows through on his threat.

“It’s not about saying goodbye to it,” Lopez Obrador said recently. “(Trump) is not going to be able to recover jobs by preventing free trade with Mexico.”

The fact Lopez Obrador’s National Regeneration Movement (Morena), a party he registered in 2014, is unlikely to gain a majority in Congress has helped soothe concerns he could push through changes that critics say could hurt the economy.

And although fund managers and economists say he remains a question mark for their clients, some seem more receptive.

“In recent weeks AMLO has moderated his public stance, reached out to local business leaders and acted in a statesmanlike manner while appearing presidential by openly supporting the Pena Nieto administration in its recent dealings with the Trump administration,” Goldman Sachs said in a note this month after a recent visit by analysts to Mexico.

In a further boost, both the PRI and the centre-right opposition National Action Party have yet to coalesce around a candidate, leaving him unimpeded. Pena Nieto is constitutionally barred from seeking re-election.

Trump offended Mexicans from the first day of his presidential run in June 2015, when he talked of Mexico sending drugs, crime and rapists to the US. Analysts on both sides of the border say the new Republican president is a boon to a committed Mexican nationalist.

“Discontent with Pena Nieto could increase voter support for … Lopez Obrador, a leftist populistwho is unafraid to antagonize the United States,” the US Congressional Research Service wrote in a February 1 paper.

“By hurting Mexico, (Trump) is indirectly helping Lopez Obrador,” he said. “(AMLO) is a man who today, is a lot more mature. He is a highly adequate choice given the current situation and the failure of the other options.”