Amid Storm of Backlash over Mexico Trip, Senator Ted Cruz Flies Back to Frozen Texas

Cruz, viewed as a presidential hopeful in 2024, faced condemnation after photos on social media showed him in an airport line, in a passenger lounge, aboard an airliner and leaving Cancun International Airport in Mexico. 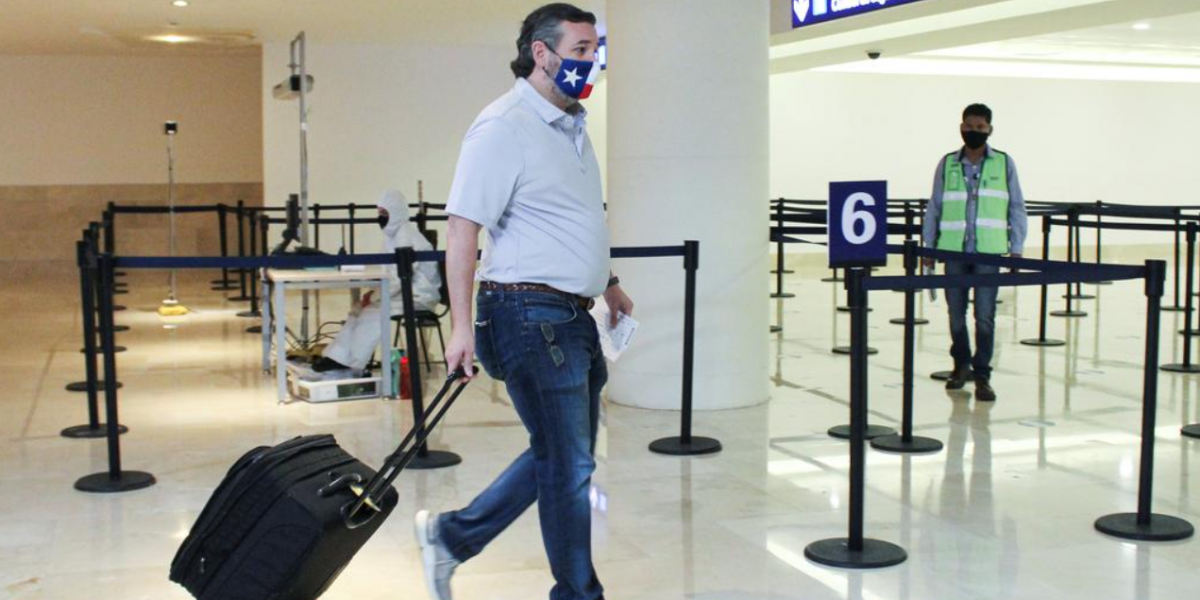 US Senator Ted Cruz (R-TX) carries his luggage at the Cancun International Airport before boarding his plane back to the U.S., in Cancun, Mexico February 18, 2021. Photo: REUTERS/Stringer

Cancun: US senator Ted Cruz flew into a storm of criticism on Thursday after leaving his home state of Texas in the grip of a deadly deep freeze, for a family holiday jaunt to the Mexican resort of Cancun he said he took to please his young daughters.

“It was obviously a mistake. In hindsight, I wouldn’t have done it,” the 50-year-old Republican told reporters as he returned to Houston.

Cruz said he had planned to stay through the weekend, but had second thoughts “almost the moment I sat down on the plane.”

In text messages obtained by American Bridge, a Democratic political group, Cruz’s wife Heidi asked neighbours whether they wanted to accompany the family to Cancun.

“Anyone can or want to leave for the week?” she wrote, noting that rooms at the city’s Ritz Carlton cost “$309 plus tax.”

With millions of Texans grappling with the fallout from a ferocious winter storm, Cruz, viewed as a presidential hopeful in 2024, faced condemnation after photos on social media showed him in an airport line, in a passenger lounge, aboard an airliner and leaving Cancun International Airport in Mexico.

Some critics slammed his comments blaming his daughters, aged 10 and 12, for his decision to visit the resort, where the weather was a balmy 79° Fahrenheit (26° Celsius) on Thursday evening. The Texas Democratic Party called on him to resign.

White House spokeswoman Jen Psaki, speaking before Cruz was spotted at Cancun airport, said tongue-in-cheek, “I don’t have any updates on the exact location of Senator Ted Cruz, nor does anyone at the White House.”

Millions of Texans remained paralysed by power and water outages after a winter storm and freezing temperatures that hampered efforts to restore full power.

Some 2.7 million Texas households were without heat on Wednesday and leaders warned of a domino effect on infrastructure as the lack of power cut off water supplies, strained the ability of hospitals to treat COVID-19 patients and isolated vulnerable communities cut off by frozen roads.

Cruz, who ran unsuccessfully for president in 2016, won re-election to the Senate in 2018 by eking out a victory over Democrat Beto O’Rourke by less than 3% points. He is not due to run again until 2024.

In December, Cruz criticised Austin, Texas, mayor Stephen Adler on Twitter for taking a trip to Mexico in December while telling others not to travel during the pandemic.