Macron was elected for a second term in April but risks losing control of the lower house of parliament. 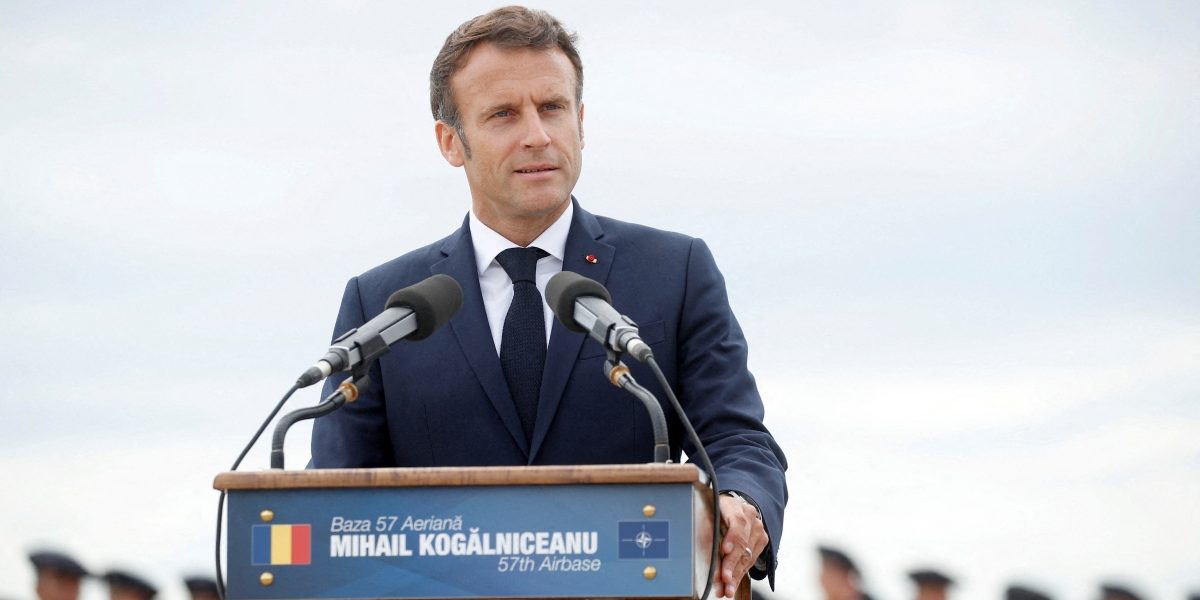 French President Emmanuel Macron delivers a statement as he visits NATO forces at the Mihail Kogalniceanu Air Base, near the city of Constanta, Romania, June 15, 2022. Photo: Yoan Valat/Pool via Reuters

Paris: President Emmanuel Macron’s centrist camp scrambled on Monday to secure support from rivals to salvage some of its reform agenda after weekend elections delivered a fragmented parliament that leaves France at risk of political paralysis.

The loss of his Ensemble alliance’s absolute majority is a bitter setback for Macron, himself elected for a second term in April. French governments have long been used to having a lower house of parliament that shares their political line and largely rubber-stamps proposals.

Sunday’s second-round vote left Ensemble as the biggest party, with a fledgling leftwing alliance determined to make its voice heard in second place, the far-right stronger than ever and the conservatives as potential kingmakers.

“It’s going to be complicated,” government spokeswoman Olivia Gregoire told France Inter radio. “We’re going to have to be creative.”

Losing control of parliament means Macron will need to shed his top-down approach to politics, which he himself called “Jupiterian“, for a much more consensual stance.

“Such a fragmented parliament will likely result in political deadlock, with a much slower reform agenda,” said Philippe Gudin of Barclays.

“This will likely weaken France’s position in Europe and endanger the country’s fiscal position, which is already weak.”

One key question is whether Macron will try to strike a coalition deal with the conservative Les Republicains – who have for now rejected that option – or enter into messy negotiations with lawmakers on a bill-by-bill basis.

Gregoire said he would soon reshuffle his government, which could see Prime Minister Elisabeth Borne lose her job after just over a month in office.

It is unclear whether the broad leftwing Nupes alliance of Jean-Luc Melenchon can stay united and what influence Marine Le Pen’s strong far-right contingent will wield.

“We will try to bring others on board with us, especially to convince the few moderates in parliament to follow us,” Gregoire said.

A few lone voices aside, lawmakers from Les Republicains (LR), who gathered on Monday to discuss the fallout from the election, have so far rejected a coalition pact – but the door may be open to deals on a case by case basis.

“We’re not here to block and we’re not for sale,” said Xavier Bertrand, a veteran Republicain. “So there is no question of being part of a presidential majority, no question of a government agreement.”

Ensemble and LR have compatible platforms on economic matters, including pushing up the retirement age and promoting nuclear energy. Together, they would have an absolute majority.

If no agreement with the opposition can be found, the euro zone’s second biggest economy faces political deadlock and possible snap elections down the line.

A first major test will be a cost-of-living bill which Gregoire said the government will put to lawmakers in eight days, when the new parliament sits for the first time.

Proposals in the summer on renewable energy will test the solidity of the left, which is divided over nuclear power.

Macron himself has yet to comment on the election result, and the opposition urged him to break his silence.

The vote was a painful setback for the 44-year-old president, whose victory in April made him the first French president in two decades to win a second term, as voters rallied to keep his far-right opponent Le Pen out of power.

In his final term, he had wanted to deepen European Union integration, raise the retirement age and inject new life into France’s nuclear industry.

Financial markets took the result largely in their stride, with little impact on the euro and stocks in early trading on Monday. French bond spreads saw some widening pressure.

“The hope that some foreign exchange traders placed in Macron in 2017 evaporated some time back, so that election victories or defeats do not play a major role for the euro exchange rates any longer,” Commerzbank analyst Ulrich Leuchtmann said in a note.