The protest comes after a group of 36 British MPs had written to UK foreign secretary Dominic Raab, asking him to make representations to his Indian counterpart. 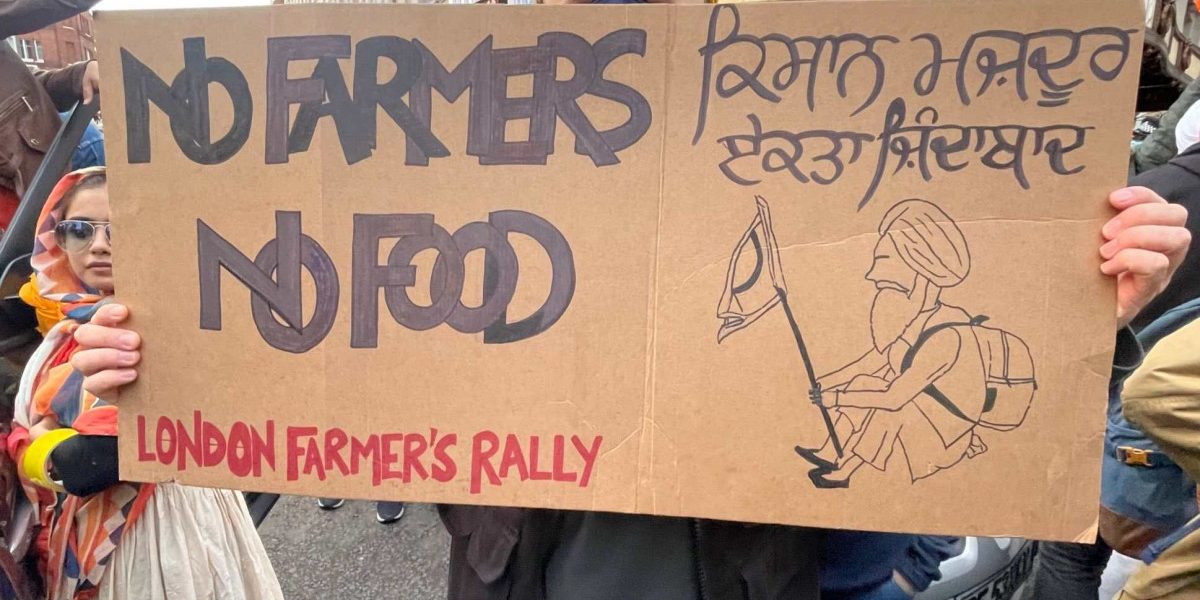 A protester holds a banner that says 'No farmers, no food' and 'Long live farmers-workers unity (in Punjabi)'. Photo: Twitter

New Delhi: Scotland Yard has reportedly made a number of arrests after it warned of enforcement action ahead of thousands of protesters from different parts of the UK gathering outside the Indian High Commission in central London on Sunday, as a show of support for farmers demonstrating against agricultural reforms in India.

Several police officers in face masks descended upon Aldwych to police the ‘We stand with farmers of Punjab’ demonstration, having warned that strict regulations remain in place to help prevent the spread of coronavirus and therefore demonstrations of larger than 30 risk arrests and fines.

The Metropolitan Police had said a robust policing plan will be in place throughout Sunday and officers will take action if they witness breaches of the regulations.

The Metropolitan Police said that 13 people in total were arrested for breach of COVID-19 regulations. Four of them were subsequently de-arrested after they provided their details to officers and were issued a fine. The other nine remain in custody.

Three teenagers who were seen to set off a firework towards a crowd were spoken to by police and the fireworks were confiscated from them. They were not arrested and police said that there had been no reported injuries from the demonstration.

“We had issued a reminder urging those who were planning to attend to reconsider but, unfortunately, a number of people decided not to follow that advice. A proportionate policing plan was in place, the demonstration has now concluded and those in attendance have begun to leave,” said Met Police Commander Paul Brogden.

“If you attend a gathering that breaches the regulations, you may be committing an offence, which is punishable by a fine. In certain circumstances, if you hold a gathering of over 30 persons and you do not meet the requirements of the regulations you might be committing a different offence, which is also punishable by a fine,” he said.

“I would strongly urge anyone who is planning to come to the Aldwych area to reconsider. I would also encourage anyone who is currently in attendance to leave the area. Our officers will take the appropriate action where necessary,” he said.

The demonstration, largely made up of British Sikhs, involved placard waving with messages such as Justice for Farmers and sloganeering as well as several cars blocking roads. 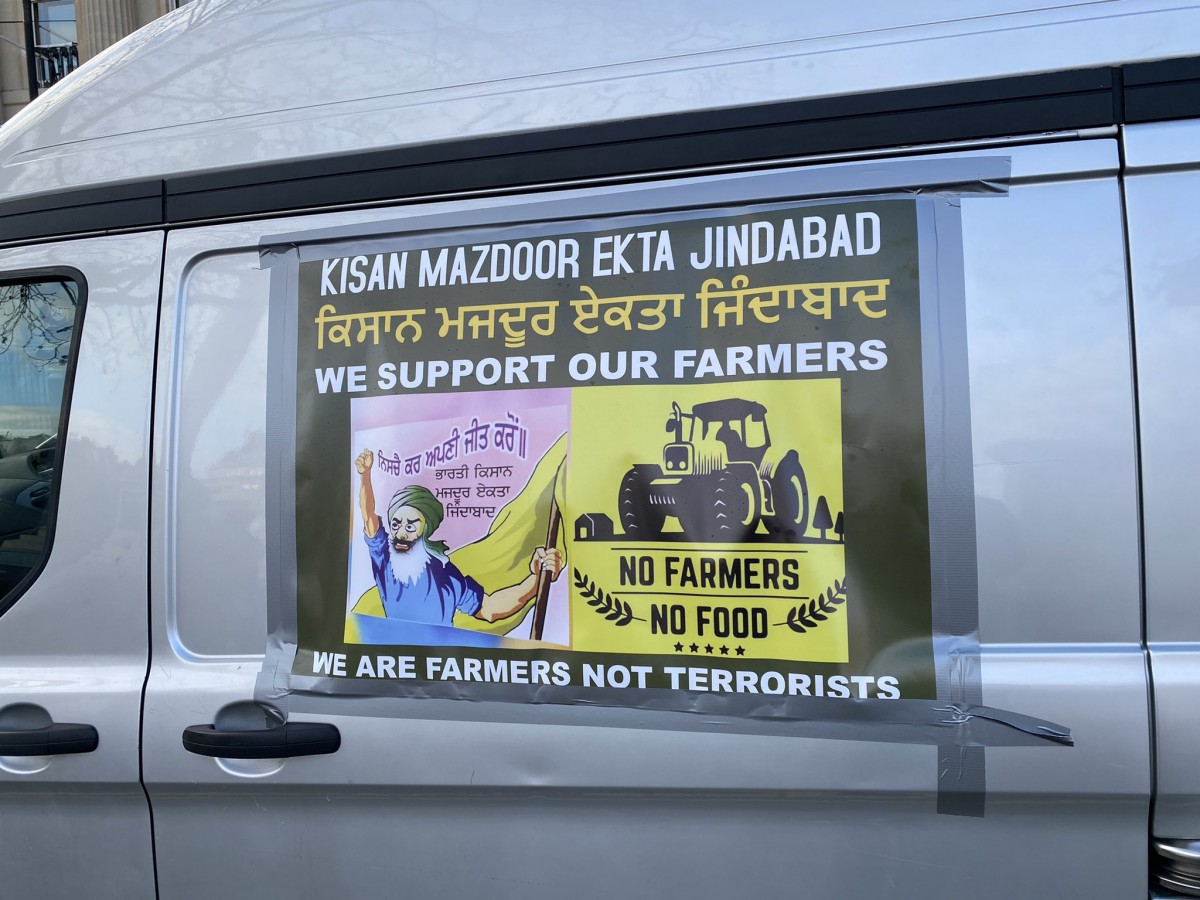 A poster on display during the farmers protest. Photo: Twitter/@RKDasgupta

“Our High Commission has been coordinating closely with the authorities concerned and we will, together with them, address the issues that have come up for example how this gathering of thousands could take place without specific permission,” an Indian High Commission spokesperson said. The spokesperson also blamed “anti-India separatists” for the protests.

The High Commission reiterated the government’s stance that the protest against agriculture reform bills in India is part of an internal democratic process.

The protest comes after a group of 36 British MPs led by British Sikh Labour MP Tanmanjeet Singh Dhesi had written to UK foreign secretary Dominic Raab asking him to make representations to his Indian counterpart S. Jaishankar on the impact on British Punjabis affected by the demonstrations by farmers in India.

The Foreign, Commonwealth and Development Office (FCDO) has said that while it is yet to receive the letter, the matter is an internal issue for India. The police handling of protests are a matter for the government of India, an FCDO spokesperson said.

The Indian mission in the UK said it has comprehensively briefed the relevant interlocutors in the UK government and Parliament on the fundamental features of the path breaking farming sector reforms initiated by the government of India.

Thousands of farmers are protesting on various borders of Delhi since November 26, seeking repeal of three farm laws enacted in September. Dubbing these laws as “anti-farmer”, these farmers claim that the newly enacted legislations would pave the way for the dismantling of the minimum support price system, leaving them at the “mercy” of big corporations.

In talks with the Centre, farmers have refused to accept anything except the complete withdrawal of the laws.