Smoke wafted through the city as riot police fired tear gas at the protesters, who attempted to keep MPs from reaching the heavily barricaded parliament. 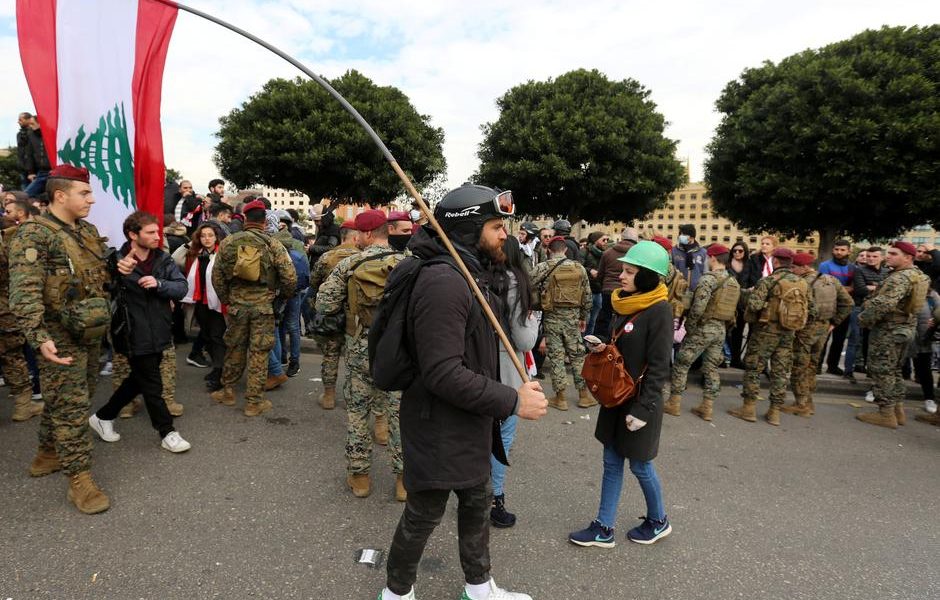 A demonstrator holds the Lebanese flag during a protest seeking to prevent MPs and government officials from reaching the parliament for a vote of confidence, in Beirut, Lebanon February 11, 2020. Photo: Reuters/Aziz Taher

Smoke wafted through the city as riot police fired tear gas at the protesters, who were seeking to keep MPs from reaching the heavily barricaded parliament. The Lebanese Red Cross said it treated 373 people for injuries, with 45 taken to hospital.

Lebanon’s new cabinet, formed last month with the backing of the powerful Hezbollah group, is hoping a financial rescue plan that formed the basis of its confidence vote in parliament can help pull the country from a deep financial crisis.

Protesters have been demonstrating since October over the worsening economy and a political class they say is deeply corrupt and say the new cabinet is part of the elite they want to oust.

“People are suffering and the government is not listening,” said Lama Tabbara, 34, an unemployed protester. “It takes a long time to uproot an old rotten tree and that’s what the government represents.”

One of the world’s most heavily indebted states, Lebanon must quickly decide how it will deal with maturities including a $1.2 billion Eurobond due in March, part of $2.5 billion owed this year.

Speaking just before the vote, Prime Minister Hassan Diab described his government’s task as a “suicide mission” that involves trying to put out a quickly approaching “fire ball”.

“We must be honest and acknowledge that the risk of collapsing is unfortunately not imaginary,” he said.

Parliament Speaker Nabih Berri was quoted saying Lebanon should seek International Monetary Fund (IMF) technical help to draw up an emergency plan but should not “surrender” to the IMF because the nation could not bear its conditions.

In comments reported by an-Nahar newspaper and confirmed to Reuters by a government source, Berri also said Lebanon should decide whether to pay the foreign debt maturing next month based on IMF advice.

Diab said the state’s priority would be to preserve scarce foreign currency reserves for critical imports like food, fuel, and medicine. He said that “all possibilities” were being studied for how to deal with Eurobonds maturing this year.

Lebanon’s crisis came to a head last year as slowing capital inflows from abroad led to a hard currency crunch and protests erupted against the ruling elite.

Eggs and paint were hurled at the cars of MPs and ministers arriving near parliament, but the session went ahead despite the scuffles. At the start, Berri said an MP had received stitches after being hit in the face and head by stones.

Protesters rejecting the new government have called for a new one independent of any political parties, as well as for tougher measures against corruption, along with judicial reform and early parliamentary elections.

“If this government keeps thinking this way and doesn’t listen to protesters, then we’re staying out here to say ‘We don’t want you’,” said Tasnim Kobani, 24. “They’ve been here for 30 years and they don’t understand that we don’t want them anymore.”

Some MPs skirted the clashes, reaching parliament on the back of motorcycles. Crowds chanted revolution, waved Lebanese flags and held signs that said “no confidence”.

A branch of one of Lebanon’s biggest banks, BLOM, was set ablaze. Flames engulfed the bank where people smashed the facade and furniture.

Banks have severely curbed savers’ access to their money and blocked transfers abroad. The Lebanese pound, pegged at the same level since 1997, has lost more than a third of its value.

At Tuesday’s session, Diab read out the government’s policy statement, which urges some “painful steps” to address the crisis. It calls for moves including cutting interest rates and seeking foreign help.

His government was formed with backing from the powerful, Iran-backed Shi’ite Hezbollah, Berri’s Amal Movement and the Free Patriotic Movement (FPM) founded by President Michel Aoun.

It won the confidence vote with 63 in favor and 20 against, with some parties either voting against or boycotting such as former Prime Minister Saad al-Hariri’s Future Movement, the major Christian parties Lebanese Forces and Kataeb, and the Progressive Socialist Party.

Senior FPM lawmaker Alain Aoun told Reuters his party was expected to adopt the position that the country needs IMF technical assistance and should draw on IMF advice in its decision on whether to pay the Eurobond.

“We need an international financial institution like the IMF to give it (the government’s financial plan) the credibility it needs, and that will open the door for us if we want to consider debt re-structuring and negotiating with creditors,” Aoun said.