Lessons From Kenya's Experiment With Transfer of Power and Resources

The Kenyan example illustrates the importance of constitutional guarantees for devolution. But it also shows that devolution is no magic bullet for the problems of corruption and ethnic politics. 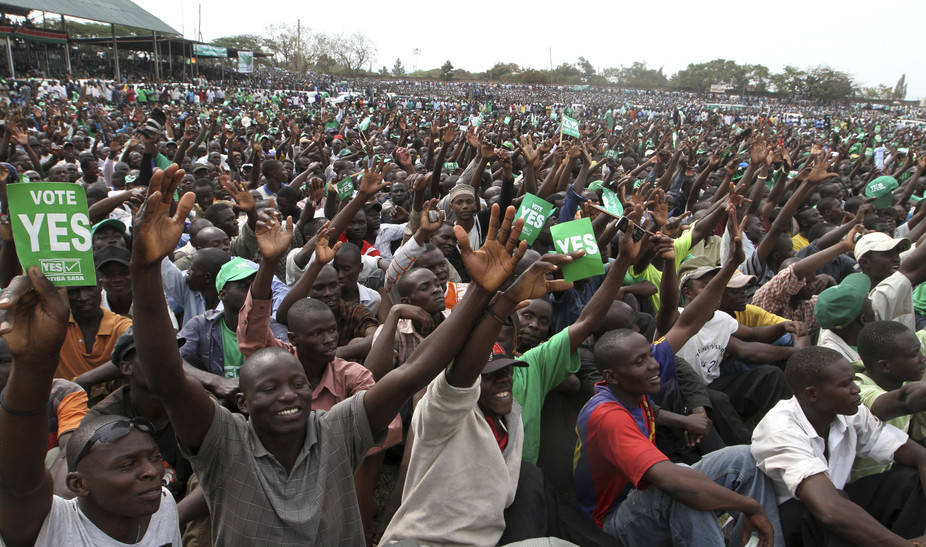 Kenyans rally for a new constitution in 2010. The constitution guaranteed shared power and resources for 47 county governments. Credit: Reuters

Kenya is three years into a bold experiment of transferring real power and resources from the national government to its 47 counties. It’s an experiment marked by vicious turf wars between national and county governments and between county governments and the Senate. And, as Michelle D’Arcy, co-author of “Devolution and Corruption in Kenya: Everyone’s Turn to Eat?” observes, devolution has come at the price of decentralising corruption. She was interviewed by The Conversation’s Regional Editor East Africa, Julius Maina.

Devolution is the transfer of authority, resources and personnel from the national to the sub-national level. As a more comprehensive form of decentralisation it always involves a form of power-sharing between central and sub-national government. So it has been used to try to protect minorities, ensure fair distribution of resources and diffuse conflict.

Although decentralisation has often been proposed as a solution to a range of problems facing developing countries, and African countries in particular, there have been few examples of success. Most African countries have introduced some form of decentralisation. Few have achieved a meaningful transfer of power as central governments have been reluctant to transfer resources and authority, and local elites have co-opted the process.

Any examples to illustrate the failure to achieve meaningful transfer of power?

Uganda is often mentioned as an example of a country that initially achieved a meaningful degree of decentralisation during the first years of Yoweri Museveni’s rule. It was then in his political interests to strengthen local government and build his support base. But more recently Uganda has experienced recentralisation.

The critical point in speaking about decentralisation in the African context is that there is no ideal scenario. Donors, and particularly the World Bank, have held out decentralisation as an idealised set of political reforms that will bring greater democracy and development. But we do not have concrete evidence of this and statistical studies have yet to find clear effects of decentralisation on human development outcomes.

Why did Kenya choose devolution?

Devolution was a key part of the political settlement that emerged after the post-election violence in 2007-08 . It was seen as a solution to the underlying pathologies of Kenyan politics. The over-centralisation of the state had allowed certain ethnic groups to dominate. It led to inequitable resource distribution. It resulted in politicising ethnicity in ways that fuelled violence and a political culture of “our turn to eat”.

In which important ways is Kenya’s system different from or similar to other devolved systems?

The design of devolution in Kenya mirrors the original federal constitution (majimbo) that was in place after independence. But it devolves power to smaller units – counties, rather than provinces.

It goes beyond most decentralisation reforms in other African countries in two main respects. First, it transfers considerable powers and resources. Second, it guarantees these constitutionally, rather than just through easily-amended legislation.

What have been the most important impacts from the devolved system of government?

The most important achievement so far is the degree to which it has been implemented. In most cases where decentralisation reforms have been introduced, central governments have successfully diluted reforms so that meaningful power and resources are not transferred to local governments.

The representatives of the new county governments in Kenya, particularly the governors, have worked effectively together to ensure that devolution has been implemented. It has also ensured that a significant proportion of the national budget has been transferred.

What has been the downside?

The downside so far has been the replication in county governments of many of the pathologies we have traditionally seen in central government in Kenya. There have been allegations of corruption and the misuse of funds on, for example, foreign trips for members of county assemblies. There’s also evidence in some counties of ethnic bias in the hiring of county public services.

In this sense, devolution has not marked a change in how politics operates in Kenya, only in the level on which it operates.

What aspects should African countries seeking to adopt the development model mimic?

What important lessons have been learnt from the Kenyan experience?

The Kenyan case shows the trade-offs that are intrinsic to the process of political reform. Devolution has in many ways been implemented because it has been seen as “everyone’s turn to eat”, meaning that there is a broad-based constituency ready to fight for its implementation.