MEA spokesperson Anurag Srivastava questioned the "objectivity and neutrality" of the independent experts appointed by the UN Human Rights Council. 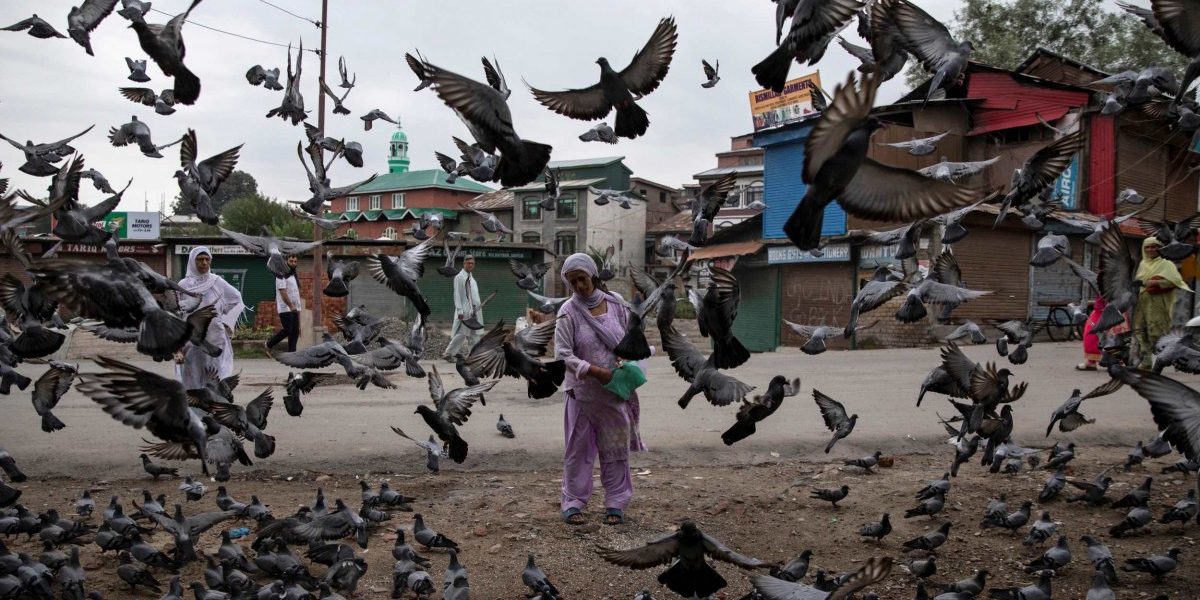 A Kashmiri woman feeds pigeons after the scrapping of the special constitutional status for Kashmir by the government, in Srinagar, August 11, 2019. Photo: Reuters/Danish Siddiqui

New Delhi: After UN human rights experts expressed concern that the new domicile rules may lead to a demographic change in Jammu and Kashmir, India lashed out, questioning the “objectivity and neutrality” of the independent experts appointed by the UN Human Rights Council.

On Thursday, special rapporteur (SR) on minority issues Fernand de Varennes and SR on freedom of religion or belief Ahmed Shaheed issued a joint statement that expressed concern at the loss of autonomy guarantees for the state of Jammu and Kashmir.

The experts stated that Jammu and Kashmir’s constitutional status was revoked “unilaterally and without consultation” in August 2019. About a year later, new domicile rules were introduced, which the UN experts claimed “removed protections given to those from the territory”.

“The number of successful applicants for domicile certificates that appear to be from outside Jammu and Kashmir raises concerns that demographic change on a linguistic, religious and ethnic basis is already underway,” said the experts in a statement released in Geneva.

The two UN experts stated that these legislative changes “may have the potential to pave the way for people from outside the former state of Jammu and Kashmir to settle in the region, alter the demographics of the region and undermine the minorities’ ability to exercise effectively their human rights”.

They urged the Indian government to ensure that “economic, social and cultural rights of the people of Jammu and Kashmir are protected, and that they are able to express their political opinions and participate meaningfully in matters affecting them”.

In a reaction issued late Thursday night, the Ministry of External Affairs (MEA) spokesperson Anurag Srivastava declared that it was “deplorable” that the SRs did not wait for India’s response after sharing their questionnaire on February 10. “Instead, they chose to release their inaccurate assumptions to the media. The Press Release has also been deliberately timed to coincide with the visit of a group of Ambassadors to Jammu and Kashmir,” said Srivastava.

Around two dozen foreign envoys are currently in Jammu and Kashmir on the third tour for diplomats organised by the Indian government after the state’s bifurcation into two Union Territories.

On the apprehension of demographic change, Srivastav stated that the fears were “baseless and unfounded” as an “overwhelming majority of domicile certificates issued in J&K are to the erstwhile Permanent Resident Certificate (PRC) holders”.

“This press release calls into question the larger principles of objectivity and neutrality that the SRs are mandated by the Human Rights Council to adhere to. We expect the Special Rapporteurs to develop a better understanding of the issues under their consideration before jumping to hasty conclusions and issuing press statements,” asserted Srivastava.

He claimed that the statement by the SRs disregarded that Jammu and Kashmir is an integral part of India and the decision of August 2019 was taken by the Parliament.

The Indian official stated that the UN experts ignored that the change in status and new laws allowed “people of Jammu and Kashmir to enjoy the same rights as available to people in other parts of India”. He added, “The Press Release fails to take into account the steps aimed at ending decades of discrimination, enshrining democracy at the grassroot level through successful conduct of local elections for the District Development Councils, and ensuring good governance through back to village program.”