Kanye West’s bid for president didn’t come out of nowhere. He’s always been a contradictory figure, and arrogance always mingled with his nuance and consciousness. 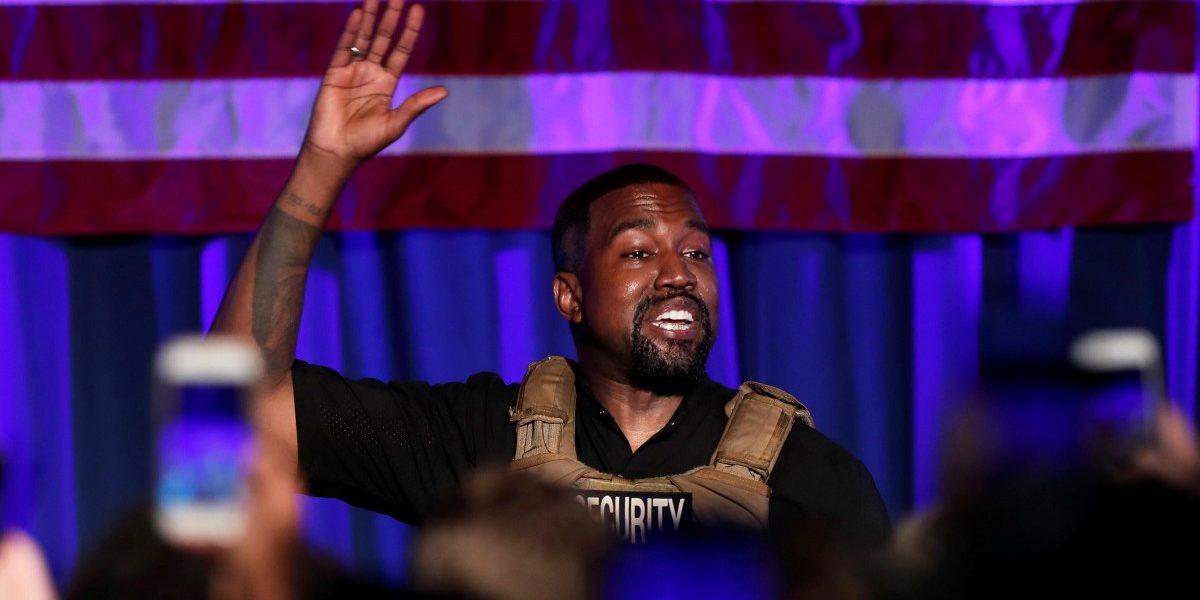 For fans and admirers of Kanye West, the past five years have been a difficult, confusing, and sometimes infuriating time. His announcement at the 2015 MTV Video Music Awards that he intended to run for president in 2020 soon turned into a bitter cycle of controversy and concern. West went on to be hospitalised and upon his return endorsed Donald Trump and issued a series of bizarre statements around slavery and racism.

The media circus surrounding West has since become an ongoing spectacle, fed by a frenzied press who report on each public outburst without compassion or contextualisation. While West’s psychological state remains unclear, and concern for him has mounted in recent months, it has become common to pin his political statements and ambitions to armchair diagnoses of his mental health. But forcing such connections is often just a way to avoid the very real possibility that this cultural icon, with whom many deeply identify, may be genuinely drawn toward Trump and his platform.

Attempts to frame West’s recent political trajectory as a distinct break from his earlier views disguise the fact that West’s current statements aren’t a radical departure from the contradictory dynamics that have always driven his work. Lamenting the rise of the problematic “new Kanye” by harking back to the more politically palatable version of the “old Kanye,” has become such a standard refrain that West himself mimicked it on the track “I Love Kanye” from his 2016 album Life of Pablo, rapping from the perspective of a fan who has grown disillusioned with him. Yet the truth is that these personas are not as distinct as many would like to suggest.

Kanye West was raised in the South Side of Chicago by his mother Donda West, professor of English at Chicago State University. His father Ray West, with whom he spent summers in Atlanta, was a photojournalist with links to the Black Panthers. While West was raised with one foot firmly in the door of the American black middle class, he was also introduced at a young age to the black radical tradition, a history that informed his early musical output. In “Never Let Me Down,” from his debut album The College Dropout (2004), he recounts how his mother was arrested at the age of six for participating in a sit-in at an Oklahoma City lunch counter, led by her father, a local civil rights leader.

With lyrics like these, it was easy for many to latch onto West as representing a new branch of “conscious” rap, bringing social and political perspectives together with his exceptionally gifted production skills. But this categorisation was something West resisted and troubled even on the same album, drawing attention to his own self-perceived failings: “Always said if I rapped I’d say somethin’ significant / But now I’m rappin’ bout money, hoes, and rims again”; even the “old Kanye” was already transparent about the conflicted nature of his values.

It was this duality itself that made him such a compelling figure. While mainstream hip-hop at the time of his emergence was dominated by two sides, represented by the braggadocios and gangster rap of 50 Cent and Jay-Z at one end, and the more “conscious” scene dominated by artists like Mos Def, Talib Kweli, and Common at the other, West uniquely positioned himself as someone able to transcend this divide — embodying the two souls of hip-hop in one artist.

This same dynamic has continued to play itself out throughout his career. Not confined to his lyrical output, West’s sometimes radical views are also expressed via an antagonistic relationship with fame and the culture industry. Consider two of the most defining moments of his career. In 2005, as part of a live broadcast appeal for the victims of Hurricane Katrina, West — standing next to actor Mike Myers — went off script, saying “George Bush doesn’t care about black people.” Outraged, the press and political establishment attempted to discredit him, but he nonetheless became an instant hero to many. George Bush later referred to this as the “all-time low” of his presidency — not the Iraq War, not Guantanamo, not even nearly choking to death on a pretzel. Though likely a disingenuous statement on Bush’s part, it’s still telling that West’s comments represented a big enough moment to be singled out, and the wider significance of the moment has been well documented.

Four years later at the 2009 MTV Video Music Awards, West interrupted a then 19-year-old Taylor Swift as she accepted her award for Best Video. West took the mic from America’s sweetheart in order to insist that Beyonce, who had that year released the “Single Ladies” video, truly deserved the award. The image of the young, innocent white woman being interrupted and challenged by an aggressive black man was a powerful enough trope to almost sink West’s career. The fallout was so bad that he went into self-imposed exile for a year. President Obama labeled him “a jackass,” granting West the honour of having been denounced by two sitting US presidents.

These moments are often viewed as representing two opposing sides of West’s character, yet can instead be seen as a consistent dynamic, one which has been the driving force of his career. What both the Bush and Swift incidents show is that West represents something much harder to assimilate and appropriate than other major celebrities. He is both unpredictable and uncontrollable. While he is certainly driven by ego and arrogance, so were many of the great popular artists, and he is well aware of how differently he is treated and perceived than white artists who have reached comparable commercial and critical heights — “What’s a black Beatle anyway, a fucking roach?” he rapped in 2010.

Perhaps no point in his career represents this as clearly as the release of his album Yeezus in 2013, made when West was first making serious forays into the fashion industry. West has described this period as being the moment when his “Truman Show boat hit the painting.” Frustrated by brands (most notably Nike) that wanted to put his name to predesigned products as a mere celebrity endorsement, West was desperate to exercise input and control over both design and production, but found himself shut out of an industry where his abilities were questioned and his ideas marginalised.

Promotion for the album featured West constrained by diamond-encrusted masks, performing in front of “Not for Sale” signs. Musically, Yeezus was a scream of frustration and rage, with West railing against his treatment on songs like “New Slaves”: “Doing clothes you would have thought I had help / But they wasn’t satisfied unless I picked the cotton myself.” He had hit his “glass ceiling,” losing interest in adhering to the rules of the game and intent on forging his own path forward, free from what he felt was fundamentally racist treatment. Of course, with the expansion of his Yeezy line, West is now equally responsible for the exploitation of many workers facing their own lack of control over the conditions and products of their labor.

This convergence of acute awareness of racism and dispossession in America, mixed with a genuine, ego-driven belief in the transformational potential of his own creative abilities, has always struggled to find clear political expression. Unlike many of his peers, such as his former friend, collaborator, and “big brother” Jay-Z, West has never been an uncritical advocate for black capitalism. He has also never been an advocate of black support for the Democrats, something those who expect him to bow out in support of Biden’s presidential run would do well to remember. (If a section of people really are more comfortable voting for West, despite the threat of a Trump reelection, this is more an indictment of the Democratic offering than of him.) 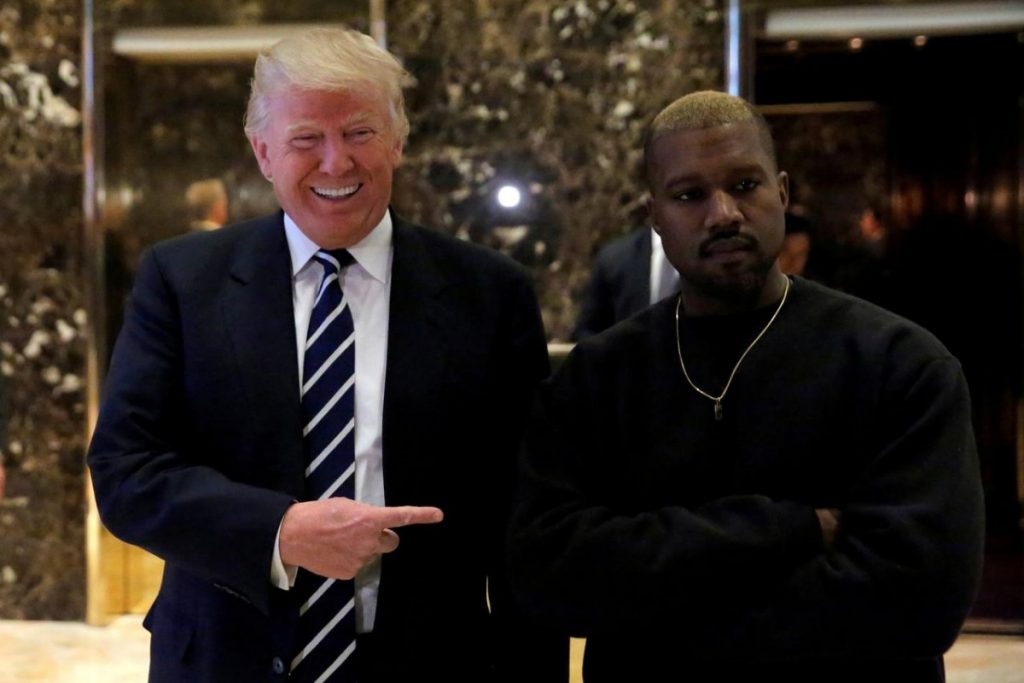 Many of those who are surprised at West’s trajectory have simply not been paying attention. Those who are startled by his recent religious turn have perhaps forgotten that his first commercial single was “Jesus Walks.” Those shocked at his latest ramblings on the topic of abortion did not hear “Blood on the Leaves” in 2013. Those wondering why he seems to prioritize fashion and shoes instead of social causes may not recall that as early as 2007 he called himself “the fly Malcolm X, buy any jeans necessary.”

These tensions have always been present, if under-acknowledged. Similarly, those who decry his recent support for Trump may not know that at the same time he declared his ideal platform would be a mix between “the Trump campaign and maybe the Bernie Sanders principles.” Whatever drives Kanye’s appreciation for Trump is more situated in a desire to upend the liberal status quo that he has found so stifling, rather than a committed right-wing ideology. West has long been looking for transformation but, unsurprisingly for someone with his upward economic trajectory, has lost sight of how to achieve it.

The cover art for West’s 2015 album Life of Pablo shows two images. One is the back of a woman in a bathing suit — face obscured, ass on display. The other image is West’s parents’ wedding photo. The text on the cover repeatedly reads “which one” — a question that could refer to several things: Which version of the album (West released multiple versions, adding and removing songs even after it’s official release)? Which Pablo, Picasso, Escobar? But also, which Kanye West? Which public incarnation of the man do we want to consume? The West steeped in black history and tradition with radical educator parents? Or the West married to Kim Kardashian, who lives in a rich LA enclave and is deeply enmeshed in the celebrity culture he once decried? Of course, West is both, laying these contradictions bare and asking us to pick, since he has finally abandoned the struggle to disentangle them.

The Left certainly does not need to support a Kanye West bid for the presidency, nor does anyone need to avoid criticising him when he makes offensive remarks. But understanding that the appeal of West the artist lies in the same antagonisms that make him such a polarising figure now is important in understanding his cultural relevance. In The Souls of Black Folk, W.E.B. Du Bois opened by posing the question: “How does it feel to be a problem?” West’s career can perhaps best be understood as the constant examination, articulation, and rearticulation of this question. He has always been honest about who he is, and has used the controversy he generates as his personal and creative fuel in search of both success and freedom. In his own words:

Jaswinder Blackwell-Pal is a PhD candidate and associate lecturer at Birkbeck, University of London, researching the convergences between performance and emotional labor in contemporary work. She tweets at @jasibp.