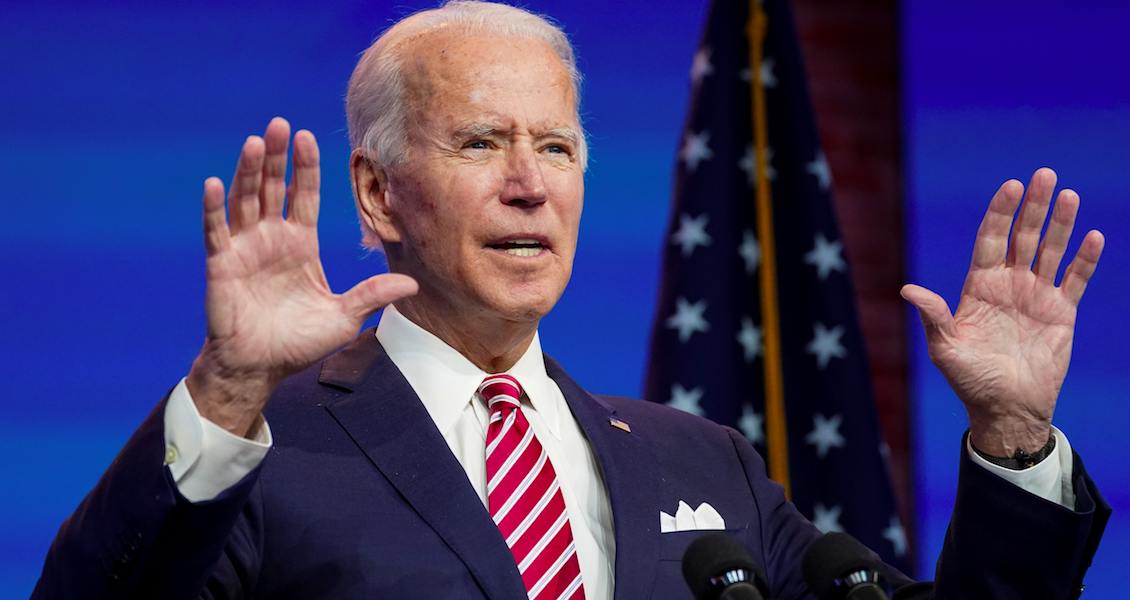 US President-elect Joe Biden speaks about the US economy following a briefing with economic advisers in Wilmington, Delaware, US, November 16, 2020. Photo: Reuters/Kevin Lamarque

Wilmington/Washington: President-elect Joe Biden on Tuesday named several top advisers from his election campaign and a Democratic congressman as senior White House aides, sticking with a tight inner circle as he transitions to the White House.

Biden is focused on preparing to take over the presidency on January 20, despite President Donald Trump’s increasingly tenuous effort to reverse the outcome of the November 3 election.

Biden presidential campaign manager Jen O’Malley Dillon, the first woman to lead a winning Democratic presidential bid, will be named a deputy chief of staff, Biden said in a statement released by his transition team.

Longtime close advisers Mike Donilon and Steve Ricchetti will join the White House as senior advisor to the president and counselor to the President, respectively. Dana Remus, the campaign’s top lawyer, will be senior counsel to the president.

US Representative Cedric Richmond, who was a national co-chair of Biden’s campaign and former chair of the Congressional Black Caucus, will vacate a House seat in Louisiana to join as a senior adviser and Director of the White House Office of Public Engagement.

Biden, who may name more staff soon, could still be weeks away from naming his Cabinet appointees.

The former vice president is also due to discuss national security threats on Tuesday with his own team of advisers, rather than current government officials, as the Trump administration has blocked him from receiving the classified intelligence briefings normally accorded to an incoming president.

General Services Administrator Emily Murphy has not yet recognised Biden as the “apparent winner,” which is needed to release government funding and office space to the president-elect. A Murphy spokeswoman said the administrator was following precedent and would make a decision once the winner is clear.

Trump has remained angry and defiant on social media even as a handful of Republicans have said Biden should be considered the president-elect. The president, who has not conceded, has repeatedly claimed without evidence he is the victim of widespread voter fraud, and his campaign has filed a flurry of lawsuits in battleground states.

Election officials in both parties have said they see no evidence of serious irregularities.

Trump campaign spokeswoman Erin Perrine on Tuesday defended the campaign’s effort, even as courts in multiple states have rejected their legal challenges.

Asked what evidence Trump campaign had, Perrine told Fox News, “That’s part of what our pursuit is at this point … There’s no silver bullet here. It’s going to take a little bit of time.”

Biden won the national popular vote by at least 5.6 million votes, or 3.6 percentage points, with some ballots still being counted.

In the state-by-state Electoral College that determines the winner, Biden has secured 306 votes to Trump’s 232.

One of Trump’s legal challenges will get a hearing on Tuesday in a Pennsylvania federal court, where another setback would likely doom his already slim chances.

US District Judge Matthew Brann will hear arguments in a Trump campaign lawsuit that seeks to block the state’s top election official from certifying Biden as the winner.

To remain in office, Trump would need to overturn results in at least three of the closely contested states in unprecedented fashion, and has no apparent legal means to do so.

Trump supporters are also clinging to hope that recounts could reverse state results, even though experts have said Biden’s margins appear insurmountable.

Georgia is undertaking a manual recount on its own, but in Wisconsin the Trump campaign would have to pay for a recount in advance. The Wisconsin Elections Commission on Monday estimated such a recount would cost $7.9 million.

Perrine, the Trump campaign spokeswoman, said the campaign would decide whether to pursue a Wisconsin recount in the next few days. Biden won Wisconsin by around 20,000 votes.

Georgia’s top elections official, Secretary of State Brad Raffensperger, said in television interviews that the audit was almost complete and that the results would be largely unchanged.

He also repeated his assertion that fellow Republicans have pressured him to find ways to discount legally cast votes.

“I’ve always been a conservative Republican and I want to make sure we have a lawful process because I think integrity still matters,” he told CBS News. “That’s what this audit is going to do.”