Recognising the negative impacts of institutionalisation, the government wants to encourage family-based care of abandoned children. 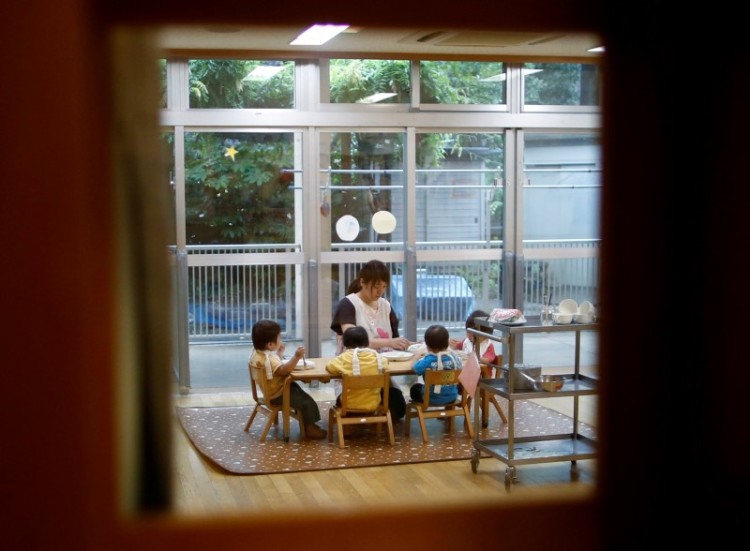 Tokyo: A baby lies in a metal-bar cot drinking from a bottle perched on his pillow in a Tokyo orphanage. There’s no one to hold and feed him or offer words of comfort.

The director of the institution, nurses scurrying busily around him, says he would like extra time and staff to pay more attention to the 70 babies and toddlers under his care, but it’s not going to happen.

“I wish we could hold them in our arms, one by one,” says Yoshio Imada. “Some people call this abuse. It’s a difficult situation.”

Japan last month passed a bill overhauling its 70-year-old Child Welfare Law, recognising a child’s right to grow up in a family setting. It is short on specific, immediate measures, but experts say it’s a first step to making institutions a last resort, rather than the default position.

A staggering 85% of the 40,000 children who can’t live with their parents in Japan are institutionalised, by far the highest ratio among rich countries and prompting repeated warnings from the UN. Even with the revised law, Japan’s goal isn’t lofty: family-based care for a third of those children by 2029.

The statistics raise the question: where can foster parents be found for tens of thousands of children in need?

“We do the best we can but it’s obvious that a one-on-one relationship that foster parents provide is better,” says Kazumitsu Tsuru, who heads another infant institution in Tokyo.

“All children need someone who is dedicated only to them.”

A major hindrance is a lack of awareness about the fostering system – there are just 10,200 registered foster families, while adoptions are even rarer, at 544 last year. And in a society that treasures uniformity and blood ties, fostered or adopted children are often stigmatised.

A rise in reports of child abuse has also proved a stumbling block. Welfare workers are too busy taking children out of immediate harm. Placing them in institutions is faster than finding a foster family.

Too busy with the next victim, welfare workers also have little time to follow up with those children, leaving them to languish for years. One foster mother knows all too well how harmful institutionalisation can be.

Now 16, her foster son lulls himself to sleep by pounding his head against his pillow for several minutes. It’s a habit he picked up as an attention-starved child growing up in institutions until he turned six. He is a charming boy, his foster mother says, but erratic.

“When I call him out on something he does wrong, he lashes out at me as if he can do whatever he wants,” she says.

“He’ll do hateful things and at other times he’ll say, ‘Mummy, I love you,’ in a childish voice that’s not normal for a teenage boy. The emotional ups-and-downs wear you out.”

Another mother describes a child she took in from an institution at age five, just when he was beginning to realise he had no family. He flew into fits of rage at school and was afraid to leave the house. Needing to test his new family’s affection, he would ask, “Mummy, what would you do if I died?” At other times, he would beg to be fed milk out of a bottle in his foster mother’s lap.

The warehousing of Japan’s most vulnerable highlights the paradox in a country struggling with a stalled birthrate and ballooning social welfare costs as the population ages. Experts say institutionalisation costs three times as much as fostering, and that Japan’s tight job market would be better-served by shifting those caregivers to daycare services to allow more women to work.

“I think the role of infant institutions will change,” says Tsuru, adding that, as the primary caregivers, institutions like his could help find babies a match in a foster or adoptive home.

“None of us wants to see a child stay longer here than they need to be.”