For decades, Saudi Arabia has gotten a free pass from the US for its unabashed brutality. But Jamal Khashoggi's alleged murder may finally be a step too far.

Pictures of Saudi journalist Jamal Khashoggi are placed on security barriers during a protest outside the Saudi Consulate in Istanbul, October 8, 2018. Credit: Reuters

When your despotic, war-hungry regime has lost Lindsey Graham, you know it’s lost nearly everyone.

“I’ve never been more disturbed than I am right now,” the South Carolina Republican senator said on Wednesday about the recent, almost-certain state-orchestrated murder of Saudi dissident Jamal Khashoggi in Istanbul, Turkey.

“If this did in fact happen, if this man was murdered in the Saudi consulate in Istanbul, that would cross every line of normality in the international community,” Graham went on. “If it did happen, there would be hell to pay.”

Also Read: Trump Says US Would be ‘Punishing’ Itself by Halting Military Sales with Saudi Arabia

It’s worth remembering who’s speaking these words: Lindsey Graham, the man who opposed declassifying the twenty-eight pages of the 9/11 report implicating the Saudi government because of the “damage” it could do to that same government; the man who, when the Saudis needed to pressure President Obama to go into Syria so they could topple Bashar al-Assad, was the first to sign up to help; the man who has consistently backed arms sales to the despotic regime because “it would be a disaster to sever the relationship with Saudi Arabia”; the man who has implacably cheered on the Saudi government’s perverse destruction of Yemen because “we have no perfect allies.”

If someone this slavishly devoted to both the Saudi government and war is talking like this, it may well be a sign of something much bigger bubbling up.

Signs of this shift are forming elsewhere. Already there is pressure building on the Trump administration to cut off the flow of arms to Saudi Arabia and even end US support for its war in Yemen, while a number of companies and individuals have pulled out of the upcoming Future Investment Initiative in Riyadh. In the UK, London’s Natural History Museum has come under fire for hosting a reception for the Saudi embassy in exchange for a dump truck full of cash.

The reported killing of Khashoggi caps off a hell of a couple of years for the Saudi government, which has been acting increasingly recklessly and brutally under crown prince Mohammed bin Salman.

At home, there’s of course the purge and torture of his political rivals, followed by this summer’s crackdown on human rights activists. Meanwhile, on the world stage, the Saudi government has: kidnapped the prime minister of Lebanon and forced him to resign (later rescinded); blocked the Qatari-owned Al Jazeera from its Internet; cut diplomatic ties with and blockaded Qatar in advance of an invasion of the country; had the US secretary of state removed from his post for preventing that invasion; and suspended diplomatic and business relations with Canada over human rights criticisms, before a government-linked Saudi Twitter account appeared to threaten Canada with a 9/11-style attack. It’s also been inching toward war with Iran and has continued its breathtakingly cruel war in Yemen, where it recently blew up a school bus full of children.

Also Read: Saudi Arabia at the Edge of a New Era

Khashoggi’s reported torture and murder is, therefore, the endpoint of a spiral of ever more brazen, lawless antics by the new crown prince. There’s a simple reason bin Salman has felt secure enough to embark on this course: the occupancy of the White House by Donald Trump, who is closely tied both financially and politically to the Saudi elite in ways that have always been far more obvious, suspect, and substantive than his Russia connections. It helps, too, that the Saudi government long ago captured the favour of not just the wider US political elite, but its media elite, too. 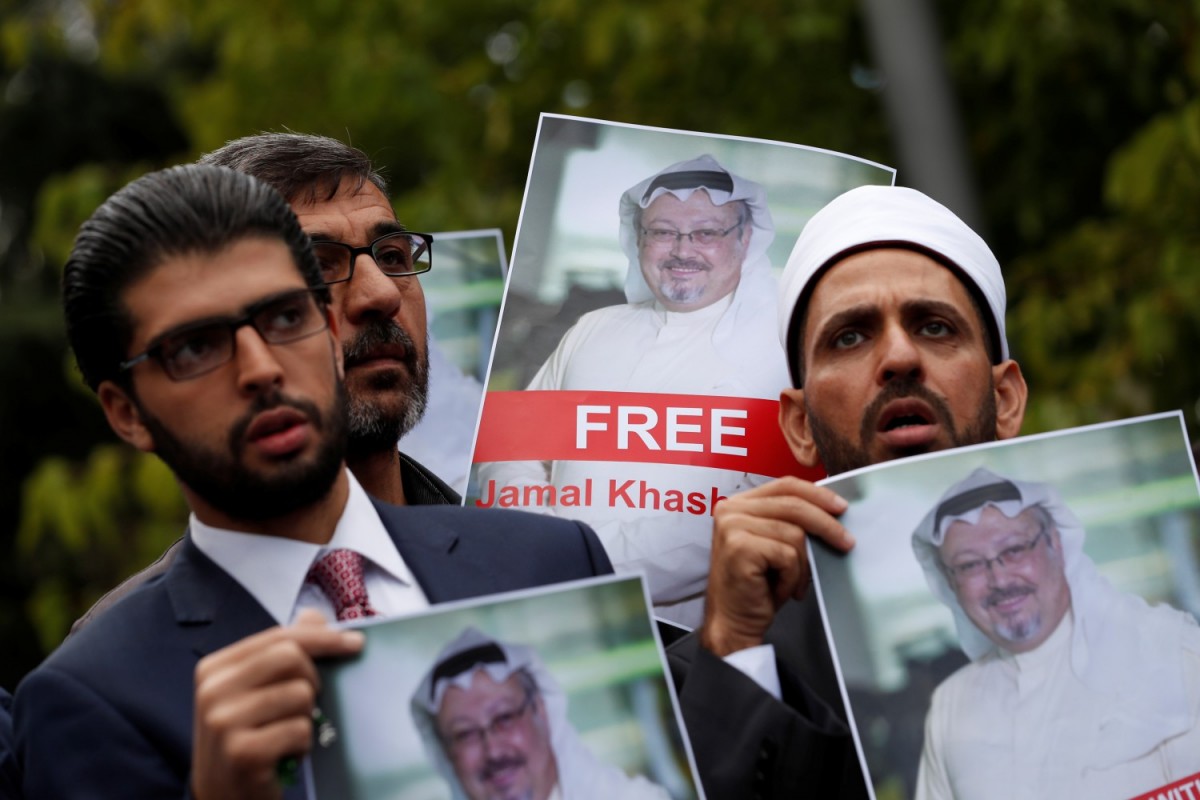 So to see the current pressure on Trump and other entities over their closeness to the Saudis, and to see someone like Graham at least pretend to be outraged and tentatively promise some kind of reckoning, is remarkable.

We’ll see what, if anything, comes of all this. There’s already speculation that it may deal a mortal blow to the US-Saudi alliance. This is a bit hasty. After all, to a state that was complicit in the murder of thousands of Americans, the heinous crime of murdering a single Washington Post columnist would be light work.

It’s worth putting things into perspective, too. For three years, the Saudi government has been killing, starving, displacing, and infecting with disease, a cumulative total of millions of Yemenis as part of its war in the country. None of this has apparently been distasteful enough for US elites to stop fêting the Saudi government.

Politicians have continued treating it as a favoured ally. A leading US entertainment company partnered with the government to broadcast its propaganda for a lucrative payday. Tom Friedman and 60 Minutes have produced puff pieces lionising its crown prince. Dwayne “the Rock” Johnson, Morgan Freeman, James Cameron, and other celebrities wined and dined the prince as if he were the celebrity. He met with the owner of the newspaper whose columnist his government would allegedly murder to laugh and talk investment opportunities.

It could be argued that Khashoggi was the straw that broke the camel’s back – but that’s a lot of straws. The more obvious explanation is that Khashoggi, while a single individual, is also a member of the Saudi elite who wrote for an elite US newspaper and had elite American friends.

The murder of nameless, non-white civilians in pitiless, far-off wars backed by the US government is simply par for the course for how Washington operates. But men like Khashoggi aren’t meant to be killed, and certainly not in the gruesome way Khashoggi allegedly met his end. In this sense, in a political culture that prizes the lives of the well-known and well-connected over the mass obliteration of the poor and anonymous, his murder really would be a violation of norms in a way that the destruction of Yemen isn’t.

It’s also worth noting that Saudi Arabia isn’t the only country committing such brazen acts of violence. Just yesterday, Human Rights Watch released a report about Egyptian-American limo driver Khaled Hassan, who was detained for four months as part of the Egyptian government’s ongoing campaign of terror. The details of what happened to him during his disappearance are not easy to read. Egyptian security forces reportedly tortured him – including beatings and electrocution – anally raped him twice, and later operated on his wounds without any anaesthesia.

This incident follows other acts of lethal recklessness by the Egyptian government, including a 2015 airstrike on picnicking tourists that left twelve people dead, and the alleged torture and murder of an Italian graduate student by security forces that same year. This violence, too, has been underwritten by unbending support from successive US presidents.

One would think the brutal torture of a US national at the hands of another supposed ally would be bigger news. Perhaps it’s simply been subsumed by the outrage over Khashoggi. Yet as the muted reaction to Israel’s 2010 summary execution of a US citizen showed, there’s never been much appetite among the media and political elite to take on the US government’s most cherished allies over even a crime as elemental as the mistreatment of an American.

Of course, replace either of these two countries with one of the US’ traditional geopolitical bogeymen – Iran, North Korea, and, especially, Russia – and the current furore over Saudi Arabia would look like a minor tiff in comparison. Just recall the wave of denunciations that followed when Trump agreed to hold a routine summit with Russian leader Vladimir Putin. One can only imagine the reaction if he had refused to take action after Putin tortured or killed an American legal resident or citizen.

The US is in a peculiar position where its so-called allies – countries like Saudi Arabia and Israel – are not only engaged in human rights abuses that equal or even outstrip those of its foes, but meddle more intensely in its politics and commit outrageous damage against it. Seventeen years ago, the Saudi government was complicit in the worst terrorist attack on US soil, for which it was shielded and rewarded by the US political establishment. Unsurprisingly, it’s only gotten bolder since then. If the alleged murder of Khashoggi really does lead to a rift in US-Saudi relations, it’s long overdue.

Branko Marcetic is a Jacobin staff writer. He lives in Auckland, New Zealand.