Jair Bolsonaro Is Weaker Than He Looks

Despite his authoritarian bravado, Bolsonaro is having a hard time overcoming a weak economy, mounting scandals, and mass mobilisation against his government. 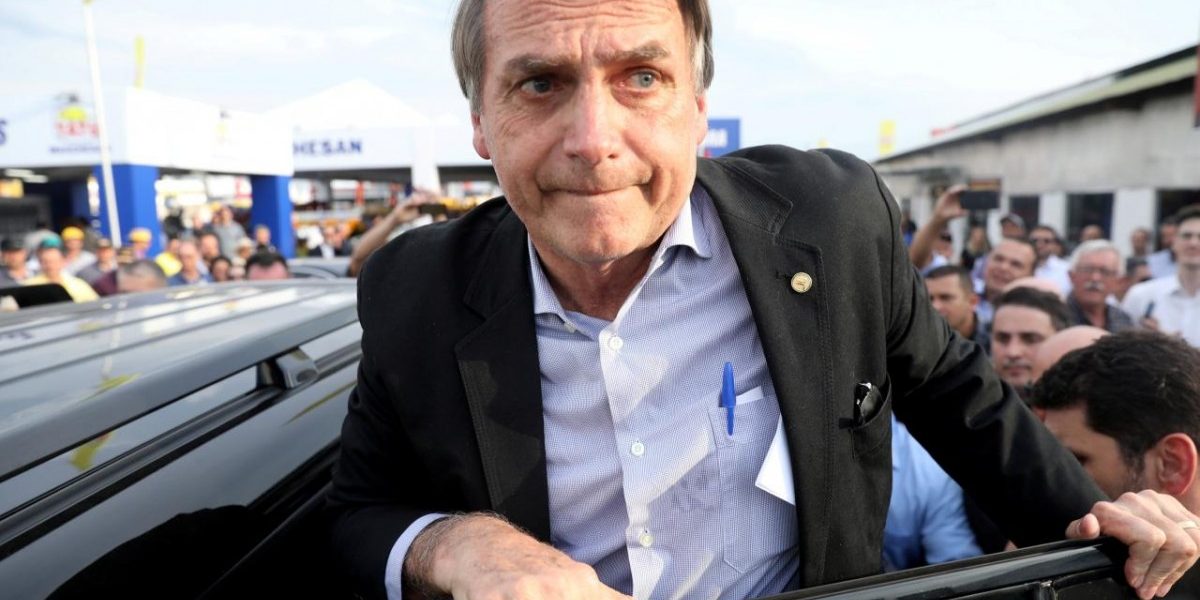 Brazil saw its largest demonstrations since June 2013 take place this month against the government’s 30% cut in education budgets. Brazilian President Jair Bolsonaro, who was elected on a wave of resentment against the country’s failing institutions, might have thought he could mobilise his base against the universities he describes as dens of “cultural Marxism“.

Yet not only is the electoral coalition that brought him to power fraying at the seams, leaving him to rely on a sizable but politically extreme core base, the magnitude of the response suggests he may have picked the wrong target.

To call the Bolsonaro government anti-intellectual would be an understatement. Its ideological core is composed of wannabe alt-right ideologues, religious conservatives, conspiracy theorists, Holy Crusade LARPers, and figures who, despite disparaging universities, are frequently caught lying about their academic credentials. Their guru is a flat-earther-curious United States-based astrologer who fancies himself a great philosopher and claims to have refuted Copernicus and Einstein.

Even the most qualified of its members — finance minister Paulo Guedes, who holds a PhD from the University of Chicago — bears a grudge against his peers for never seeing him as worthy of a permanent position at the country’s foremost neoliberal economics school.

This ragtag band of misfits found a way of squaring personal failure with a belief in free competition in the conspiracy theories about communist-globalist plots favoured by the likes of Viktor Orbán and Stephen Bannon. They are historical revisionists in regard to the military dictatorship in Brazil, and even the Holocaust, and are unabashed climate denialists.

What they describe as a struggle to defend “Western values” is, therefore, a full-blown war on reality. It is important for them to eliminate any way of accessing a world other than the one they have fabricated, be it through empirical facts or critical tools for analysing evidence. The more they can do so, the freer they will be from the resistance imposed by the real world — including from the very possibility of assessing the impact that their actions are already having.

Also read: The Similarities Between Donald Trump and Jair Bolsonaro

Thus, Bolsonaro’s reaction to the country’s soaring unemployment rate has been to question the way it is calculated, and then attack the federal organ in charge of statistical research, slashing its budget and vowing to revise its methodologies.

It started with an announcement that the government planned to defund the humanities in favour of areas that offered an “immediate return” to society — which is to ignore that the humanities are the areas that most students from poor backgrounds go into and that their primary role is to train teachers for Brazil’s chronically resource-deprived basic education.

Shortly after, the minister of education communicated a 30% budget cut to three universities that were allegedly underperforming because of internal “disorder”; even though they have been among Brazil’s top 20 for decades. Said “disorder” consisted mostly of on-campus political activity, making the motivations behind the decision explicit. When it was pointed out that this violated constitutionally enshrined rights to academic freedom and university autonomy, the government extended the 30% cut to all federal universities. This was explained at first as a decision to prioritise basic education, but then basic education funds were also slashed. The story then became that funds were being withheld until Congress passed the government’s pension reform, effectively making the latter into the ransom to be paid so that many universities and schools are not forced to shut down before the end of the year.

Not that this is just about ideology, of course. It is part and parcel of the overall plan to ensure a predatory round of accumulation for Brazilian and international capital, also visible in the aggressive rollback of environmental guarantees, an extremely market-friendly pension reform, and the elimination of 90% of labour safety regulations.

The ministry of education has greenlighted 70%more new private universities in the first months of 2019 than in the whole of last year and is certainly willing to throw even larger bones to the private education lobby — coincidentally headed by Elizabeth Guedes, sister of the finance minister.

Why did Bolsonaro get into this fight now? His government has lived by the motto of moving fast and breaking things, but too many of those things have been the government itself. The hope that made the markets and many liberals support Bolsonaro — that he would be sufficiently opportunistic to tone down his divisiveness — has been proven wrong. The administration’s relationship with Congress veers between shambolic and confrontational, and it is not clear that they can deliver the ambitious pension reform plan that earned Bolsonaro the support of Brazilian capital.

Unlike Trump, he does not even have economic recovery going for him: the country’s economy has flatlined, and the government’s volatility keeps domestic and foreign investors at bay. Besides, the claim to being different from the rest of the political elite wears thinner as closer scrutiny reveals this to be an administration of small-time operators operating way out of their depth.

One of Bolsonaro’s sons is being investigated for the kind of petty corruption that local politicians engage in, and evidence of the family’s ties with paramilitary militias piles up. As a consequence, Bolsonaro’s popularity ratings have taken a tumble since January, especially among the poorest, granting him the worst early-term favourability since the 1980s.

The electoral coalition that brought him to power was always going to be brittle, as it combined wildly disparate economic interests, with little more in common than the candidate’s capacity to mean all kinds of things to all kinds of people and a ferocious rejection of the political establishment — the Workers’ Party (PT) above all.

Since trying to govern on behalf of all his voters would demand a skill and nuance he does not have, Bolsonaro has foregone cementing a majority and focused instead on consolidating his greatest asset: a sizable core of highly engaged true believers that can secure a lasting political niche for his family’s brand of politics and permanently pull the centre of public debate towards the far right.

This, however, involves the constant creation of intentional and accidental crises, as well as a war of attrition against everything he decides to identify with “the old politics” — the parliament, the judiciary, the media, and institutions in general.

This creates a feedback loop: the more Bolsonaro courts his base, the more turbulence surrounds the government, and, as a consequence, the more he needs to court his base. Actions such as his attack on public education and a decree easing gun laws must be seen in this light.

The education protests, however, suggest that Bolsonaro may have bitten off more than he can chew. Although the industrial fake news machinery that aided his election has been reactivated to spread memes presenting universities as cesspits of nudity and drug use, the deep social roots of public education in Brazil pose a serious obstacle. For many poor families, schoolteachers are their only contact with the state apart from the police. Moreover, anyone familiar with the reality of basic education is unlikely to believe its biggest problem is anything other than lack of funds. 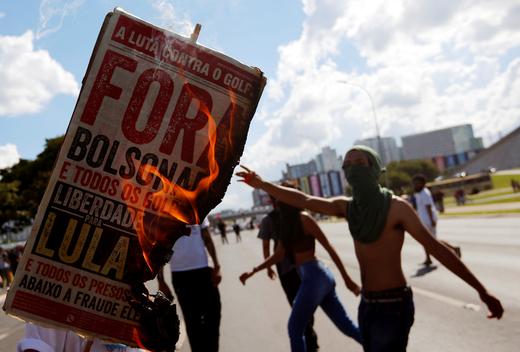 Beyond the classrooms and apart from research, universities play a role in local economies that is hard to ignore, especially in smaller towns. In addition, many poor families still see higher education as the key to social mobility, and public universities as among the few spaces that cut across Brazil’s social apartheid.

A recent study shows that over 70% of undergraduates at federal universities come from low-income families, and black students are the majority for the first time in history. This is even truer now thanks to the expansion of higher education achieved during the Lula years. Last but not least, arguing that the best way to improve public education is starving it to death is always going to be a hard sell.

In short, public education might be too large a piece of reality for the government to fantasise its way around.

Bolsonaro’s reaction to the success of the May 15 demonstrations, which mobilised people far beyond the usual ranks of the Left, was to incite his supporters to hold their own protests. These confirmed the surprising size of his core base, but were also quite smaller than the education protests and drew criticism from several political allies, forcing Bolsonaro to half-distance himself. Despite being a show of strength, the net result did not make him stronger.

With the excellent turnout for the second round of protests on May 30, a general strike against the pension reform planned for this week, and a new scandal engulfing anti-corruption judge turned minister of justice, Sergio Moro — whose impartiality in crucial episodes like the conviction of former president Lula is now very much in question — the heat is still on.

Bolsonaro’s conundrum is that the path he has chosen depends on cranking the ideology up, but the noise has started to get in the way of his functioning in the real world. This is testing the patience of big capital, which expected stability and quick results; but also that of most of the population, especially the poor, who are less interested in ideology than in seeing problems solved. The cost of keeping the true believers on board might be alienating everyone else. In this war on reality, reality has started to fight back. In time, something will have to give.

Rodrigo Nunes is a philosophy professor at the Catholic University of Rio de Janeiro (PUC-Rio). His new book, Beyond the Horizontal. Rethinking the Question of Organisation, is forthcoming with Verso.