With 63% of the votes counted, Netanyahu's centre-right bloc was more or less even with Barry Gantz's centre-left bloc. 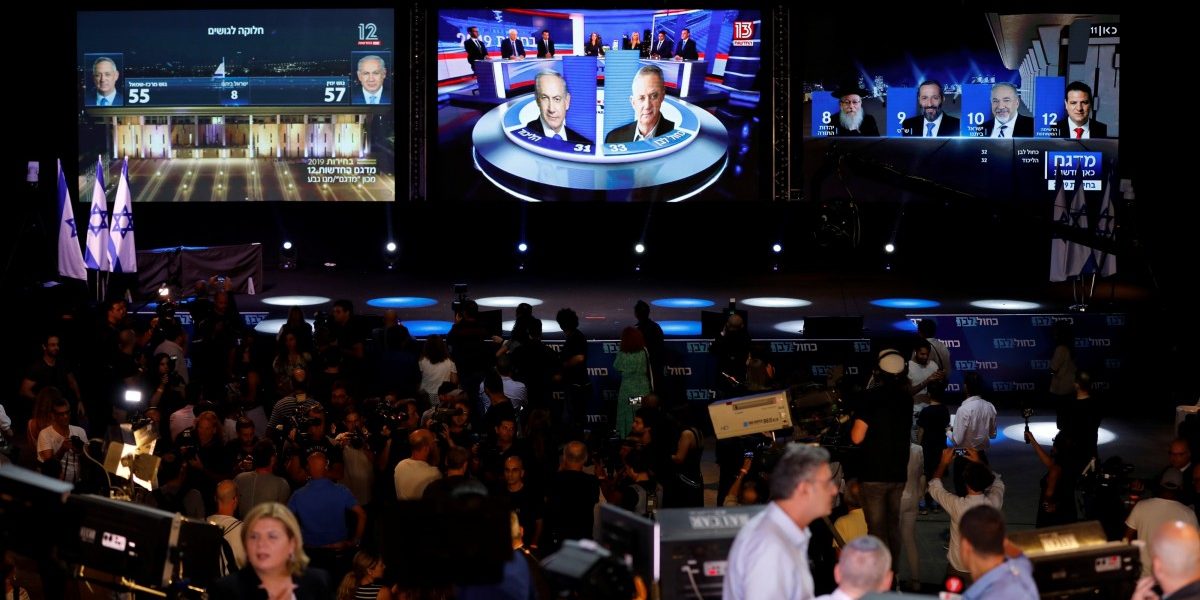 The results of the exit polls are shown on a screen at Benny Gantz's Blue and White party headquarters, following Israel's parliamentary election, in Tel Aviv, Israel, September 17, 2019. Photo: Reuters

An official result was still hours, perhaps days off. But with more than 63% of votes counted, the Netanyahu-led right-wing bloc was, as expected, more or less even with Gantz’s center-left.

With no single-party majority in the 120-seat Knesset, or parliament, there will likely be weeks of coalition talks before a new government is formed.

Lieberman has been pushing for a unity government comprised of the biggest parties. He declined to back Netanyahu’s bid to form a narrow right-wing and religious coalition after an April election, bringing about Tuesday’s unprecedented repeat vote.

Addressing Likud party faithful, Netanyahu, Israel’s longest-serving premier, sipped water frequently and spoke hoarsely. He made no claim of victory or concession of defeat, saying he would await final results.

His dead-of-night appearance was a far cry from his triumphant – and in the end premature – declaration five months ago that he had won a close election.

Gantz was more upbeat, telling a rally of his Blue and White party that it appeared “we fulfilled our mission”, and he pledged to work toward forming of a unity government.

Call for a Unity Government

Campaigns run by Likud and Blue and White pointed to only narrow differences on many important issues: the regional struggle against Iran, the Palestinian conflict, relations with the United States and the economy.

An end to the Netanyahu era would be unlikely to bring about a significant change in policy on hotly disputed issues in the peace process with the Palestinians that collapsed five years ago.

Based on the partial vote count, Israel’s main TV stations, Channel 12 and 13, projected Likud and Blue and White would each have 32 seats. With support from smaller, like-minded parties, each was projected to command a bloc of about 55 or 56, short of a majority.

That left Lieberman, whose party was forecast to win 9 seats. On Wednesday, he reiterated his call for a unity government but said he had not yet spoken to Gantz or Netanyahu.

“There is only one option – a national unity government, a broad, liberal government, and we will not join any other,” Lieberman told reporters.

Netanyahu, who highlighted his close relationship with U.S. President Donald Trump during the campaign, said in his 3 a.m. speech at Likud election headquarters in Tel Aviv that he intended to establish a “strong Zionist government” that would reflect the views of “many of the nation’s people”.

Gantz has ruled out joining an administration with Netanyahu if the Israeli leader is indicted on looming corruption charges.

The Joint Arab List made a strong showing in Tuesday’s election and was projected to capture 12 seats in parliament, compared with 10 won by various Arab factions in April’s election.

Three corruption investigations and the Israeli attorney general’s announced intention to charge him with fraud and bribery have also chipped away at Netanyahu’s seeming invincibility, 10 years into consecutive terms as prime minister marked by a sharp focus on security that resonated with voters.

Netanyahu, 69, who can argue at a pre-trial hearing in October against indictment, has denied any wrongdoing.

An election loss could leave him more at risk of prosecution in the graft cases, without the shield of parliamentary immunity that his current political allies had promised to seek for him.