On Friday, at least 15 Palestinians were killed by Israeli security forces confronting protesters. 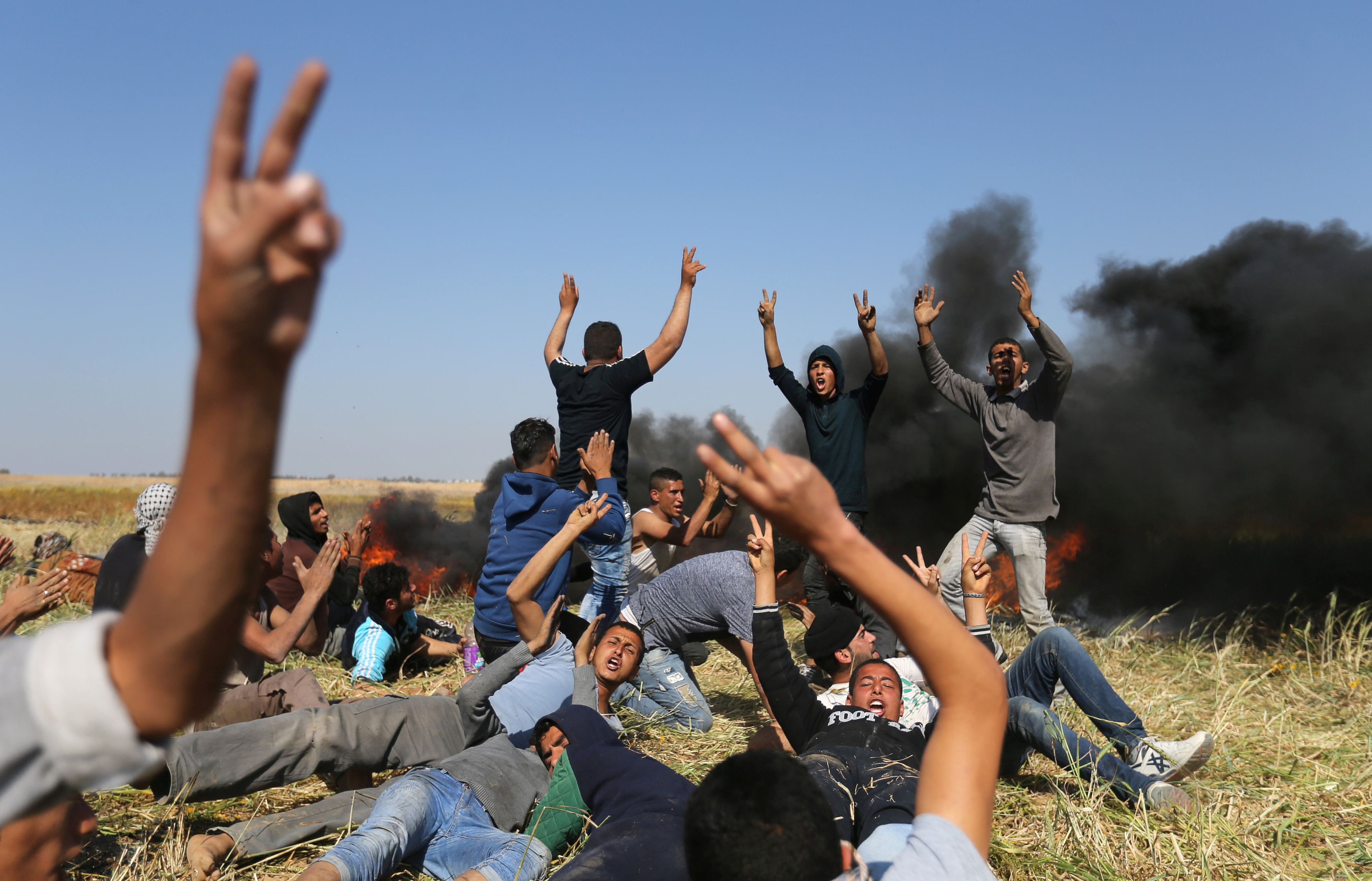 Palestinians shout during clashes with Israeli troops at the Gaza-Israel border at a protest demanding the right to return to their homeland, in the southern Gaza Strip March 31, 2018. Credit: Reuters/Ibraheem Abu Mustafa

Gaza: Israeli troops shot and wounded about 70 Palestinians among crowds demonstrating at the Gaza-Israel border on Saturday, health officials said, after one of the deadliest days of unrest in the area in years.

Thousands of people marched through the streets of Gaza in funerals for the 15 people killed by Israeli gunfire on Friday, and a national day of mourning was observed in the enclave and in the occupied West Bank.

An Israeli military spokesman said he was checking the details of Saturday’s unrest. It broke out when Palestinians gathered on the border between the Hamas-run enclave and Israel then began throwing stones. Palestinian health officials said about 70 were wounded.

On Friday, at least 15 Palestinians were killed by Israeli security forces confronting protesters. The military said some had shot at them, rolled burning tyres and hurled rocks and fire bombs toward troops across the border.

Hamas said five of them were members of its armed wing. Israel said eight of the 15 dead belonged to Hamas, designated a terrorist group by Israel and the West, and two others belonged to other militant groups.

Tens of thousands of Palestinians had gathered on Friday along the fenced 65-km (40-mile) frontier, where tents had been erected for a planned six-week protest pressing for a right of return for refugees and their descendents to what is now Israel.

But hundreds of Palestinian youths ignored calls from the organisers and the Israeli military to stay away from the frontier and violence broke out.

The protest, organised by Hamas and other Palestinian factions, is scheduled to culminate on May 15, the day Palestinians commemorate what they call the “Nakba” or “Catastrophe” when hundreds of thousands fled or were driven out of their homes in 1948, when the state of Israel was created. Relatives of Palestinian Hamdan Abu Amshah, who was killed along Israel border with Gaza, mourn during his funeral in Beit Hanoun town, in the northern Gaza Strip March 31, 2018. Credit: Reuters/Suhaib Salem

Israel has long ruled out any right of return, fearing an influx of Arabs that would wipe out its Jewish majority. It says refugees should resettle in a future state the Palestinians seek in the Israeli-occupied West Bank and Gaza. Peace talks to that end have been frozen since 2014.

Israel withdrew its troops and settlers from Gaza in 2005 but still maintains tight control of its land and sea borders.

Abbas’s spokesman, Nabil Abu Rdainah, said: “The message of the Palestinian people is clear. The Palestinian land will always belong to its legitimate owners and the occupation will be removed.”

Israeli military spokesman Brigadier-General Ronen Manelis said Hamas was using the protests as a guise to launch attacks against Israel and ignite the area. He said violence was likely to continue along the border until May 15.

“We won’t let this turn into a ping-pong zone where they perpetrate a terrorist act and we respond with pinpoint action. If this continues we will not have no choice but to respond inside the Gaza Strip,” Manelis told reporters.

United Nations Secretary-General Antonio Guterres has called for an independent investigation into Friday’s bloodshed, and appealed for all sides to refrain from any actions that could lead to further casualties or put civilians in harm’s way.