The Israeli military said its troops had used live fire only against people trying to sabotage the border security fence, and that at least two of the dead were Hamas operatives. 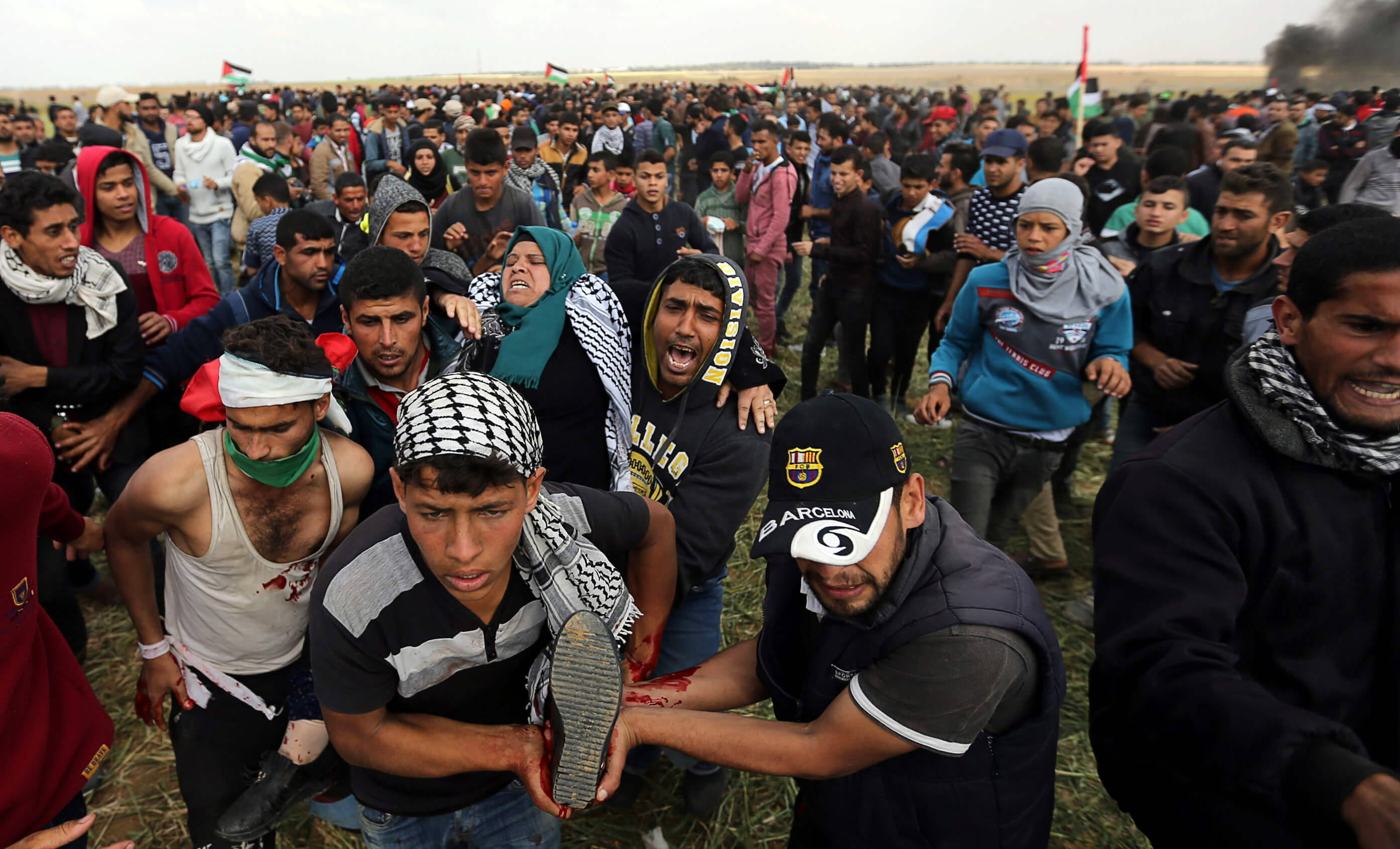 A wounded Palestinian woman is evacuated during clashes with Israeli troops, during a tent city protest along the Israel border with Gaza, demanding the right to return to their homeland, the southern Gaza Strip. Credit: Reuters/Ibraheem Abu Mustafa

Gaza-Israel border: At least 16 Palestinians were killed and hundreds injured on Friday by Israeli security forces confronting one of the largest Palestinian demonstrations along the Israel-Gaza border in recent years, Gaza medical officials said.

Tens of thousands of Palestinians, pressing for a right of return for refugees to what is now Israel, gathered along the fenced 65-km (40-mile) frontier where tents were erected for a planned six-week protest, local officials said. The Israeli military estimate was 30,000.

The United Nations Security Council was briefed on the violence in Gaza on Friday at the request of Kuwait. Palestinian UN envoy Riyad Mansour told the council at least 17 Palestinian civilians were killed and more than 1,400 injured.

Families brought their children to the encampments just a few hundred metres (yards) from the Israeli security barrier with the Hamas Islamist-run enclave, and football fields were marked in the sand and scout bands played.

But as the day wore on, hundreds of Palestinian youths ignored calls from the organisers and the Israeli military to stay away from the frontier, where Israeli soldiers across the border kept watch from dirt mound embankments.

The military said its troops had used live fire only against people trying to sabotage the border security fence, some of them rolling burning tyres and throwing rocks, and that at least two of the dead were Hamas operatives.

Palestinian health officials said Israeli forces used mostly gunfire against the protesters, in addition to tear gas and rubber bullets. Witnesses said the military had deployed a drone over at least one location to drop tear gas.

One of the dead was aged 16 and at least 400 people were wounded by live gunfire, while others were struck by rubber bullets or treated for tear gas inhalation, Gaza health officials said.

Two Palestinians were killed by tank fire, the Gaza Health Ministry said. The Israeli military said the two were militants who had opened fire at troops across the border.

Palestinian President Mahmoud Abbas said in a statement that Israel was responsible for the violence and declared Saturday a national day of mourning.

UN Secretary-General Antonio Guterres called for an independent, transparent investigation and appealed “to those concerned to refrain from any act that could lead to further casualties and in particular any measures that could place civilians in harm’s way,” his spokesman said in a statement.

A senior UN official told the UN Security Council there are fears the situation in Gaza “might deteriorate in the coming days.”

The United States, a close Israel ally, told the council it was “deeply saddened” by the loss of life.

“We urge those involved to take steps to lower tensions and reduce the risk of new clashes. Bad actors who use protests as a cover to incite violence endanger innocent lives,” US diplomat Walter said.

The protest presented a rare show of unity among rival Palestinian factions in the impoverished Gaza Strip, where pressure has been building on Hamas and Abbas’s Fatah movement to end a decade-old rift. Reconciliation efforts to end the feud have been faltering for months.

The demonstration was launched on “Land Day,” an annual commemoration of the deaths of six Arab citizens of Israel killed by Israeli security forces during demonstrations over government land confiscations in northern Israel in 1976.

But its main focus was a demand that Palestinian refugees be allowed the right of return to towns and villages which their families fled from, or were driven out of, when the state of Israel was created in 1948.

In a statement, the Israeli military accused Hamas of “cynically exploiting women and children, sending them to the security fence and endangering their lives”.

The military said that more than 100 army sharpshooters had been deployed in the area.

Hamas, which seeks Israel’s destruction, had earlier urged protesters to adhere to the “peaceful nature” of the protest.

Israel has long ruled out any right of return, fearing an influx of Arabs that would wipe out its Jewish majority. It argues that refugees should resettle in a future state the Palestinians seek in the Israeli-occupied West Bank and Gaza. Peace talks to that end collapsed in 2014.

There were also small protests in the Israeli-occupied West Bank, and about 65 Palestinians were injured.

In Gaza, the protest was dubbed “The March of Return” and some of the tents bore names of the refugees’ original villages in what is now Israel, written in Arabic and Hebrew alike.

Citing security concerns, Israel, which withdrew troops and settlers from Gaza in 2005, blockades the coastal territory, maintaining tight restrictions on the movement of Palestinians and goods across the frontier. Egypt, battling an Islamist insurgency in neighbouring Sinai, keeps its border with Gaza largely closed.