Things have changed in Rashshash since violent settlers attacked the police – first on November 7, when the police halted construction at an illegal outpost called Ma’oz Esther.

Editors’ note: With the Trump administration reversing the US’s position and declaring that Israeli settlements in occupied Palestinian territory are not a violation of international law, we are publishing this account by two Israeli peace activists of the daily impact that this illegal settlement has on the lives of the Palestinian people.

We are three – Guy, Nina and me. We reach Rashshash with the dawn. Tea is served. How are things? “Settlers at our throat every day.” 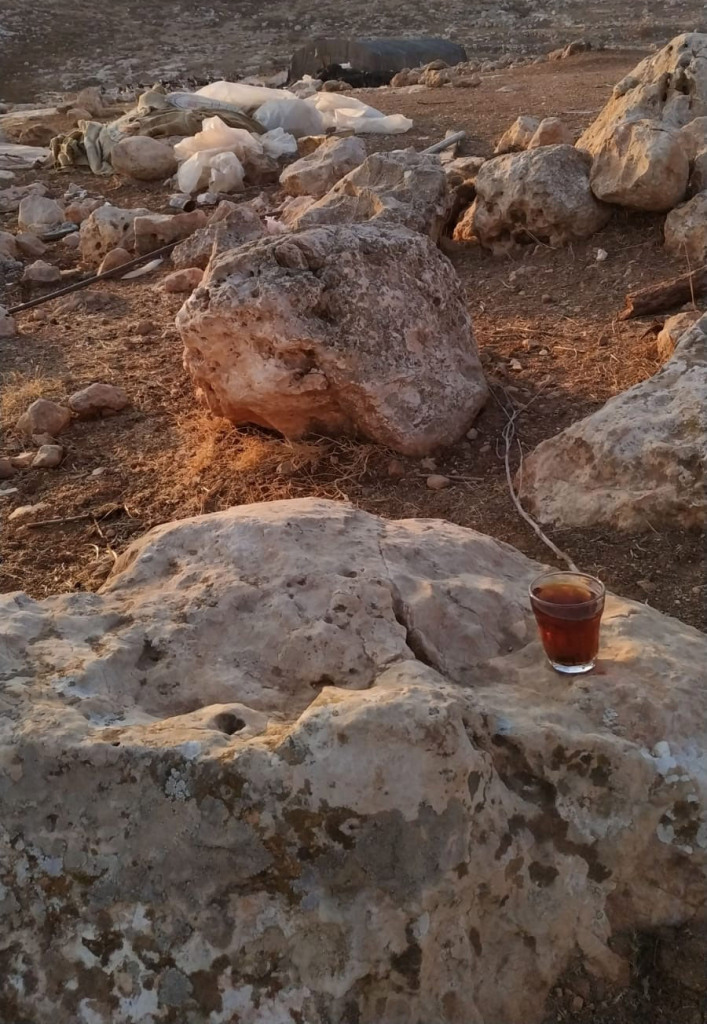 Ra’id is already out on the hills with his herd. We set off to join him, crossing the wadi, then climbing the steep slope. Here is a young boy on his donkey, coming home. “Good morning,” we say. “Careful,” he says, “they have been beating people up.” He’s scared. 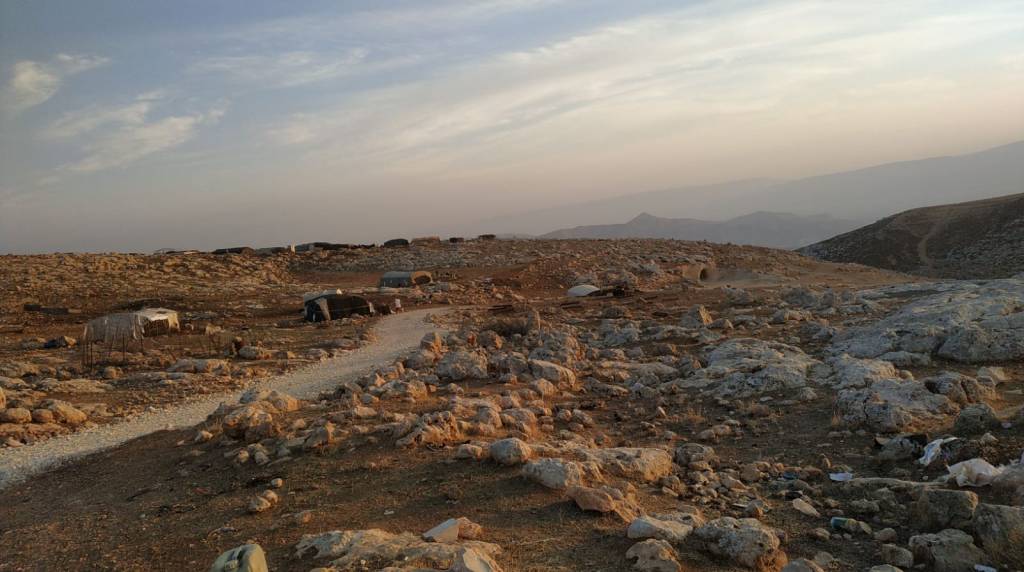 6:30. Guy calls the army “war room” that is situated not far away. He speaks to the duty officer in a new tone. These days, soldiers and police may be a little more amenable to our phone calls. “My name is Guy Hircefeld, I’m a human rights activist. We are at Rashshash with the Palestinian shepherds. Judging from the last few days, there is a real possibility of a clash with settlers from the outpost that calls itself ‘Angels of Peace.’ I suggest you send some soldiers now.” 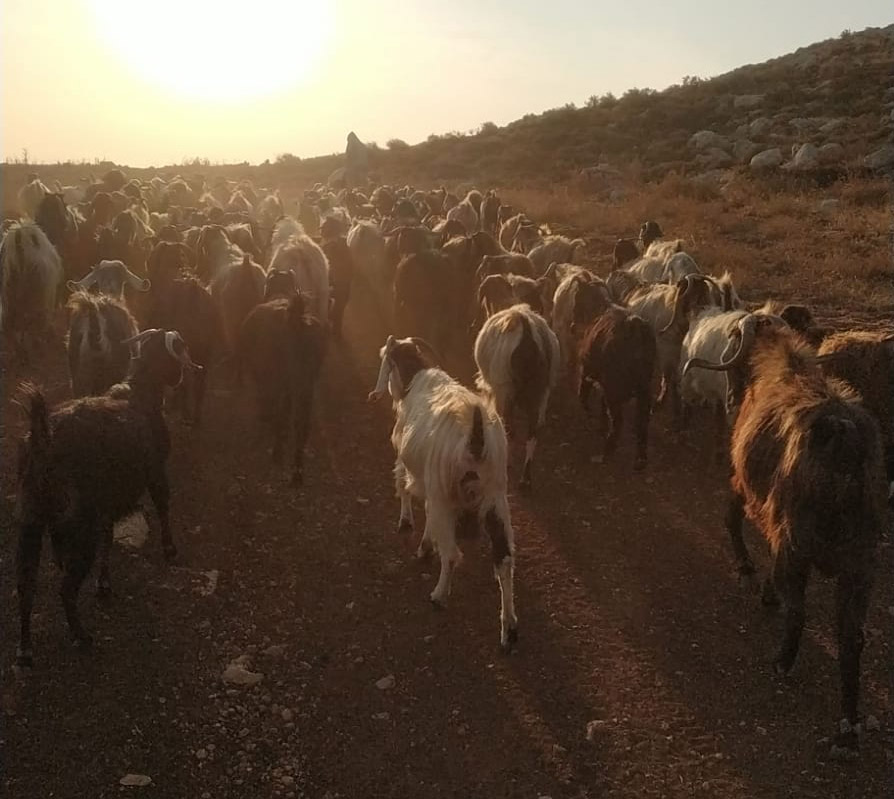 Things have changed here, a little,  since violent settlers began attacking the police – first on November 7, when the police halted construction at an illegal outpost called Ma’oz Esther, not far from ‘Ein Rashshash; then this past weekend, when settlers in Yitzhar in the northern West Bank wounded three policemen who came to arrest a fugitive settler banned from being there.

Yitzhar is one of the more violent places on the planet, as its Palestinian neighbors can tell you. I know it from the days when settler thugs drove out the entire population of the adjacent village of Yanun, and we brought the villagers back and stayed with them for weeks to keep them safe. This time, on Sunday, two hundred Yitzhar settlers fought the police with stones, bottles of paint, and whatever else came to hand.*

Also read: Illegal Outposts and Struggles for Water: A Day in Palestine

But no soldiers come to Rashshash so early, and ten minutes after that call we see three settlers from the outpost and their herd of sheep coming toward us. One of them is on horseback. He rides off to wreak havoc with another herd, closer to the Rashshash tents. The other two – they are adolescents, maybe 15 or 16, religious, twisted fringes flapping on their thighs, sun-caps instead of skull-caps, long ear-locks, cellphones – stride straight into the Palestinian herd, scattering it in all directions. They seem indifferent to their own herd, left far behind – the main thing is to terrorise the Palestinians, sheep and shepherd. Thus: chaos. 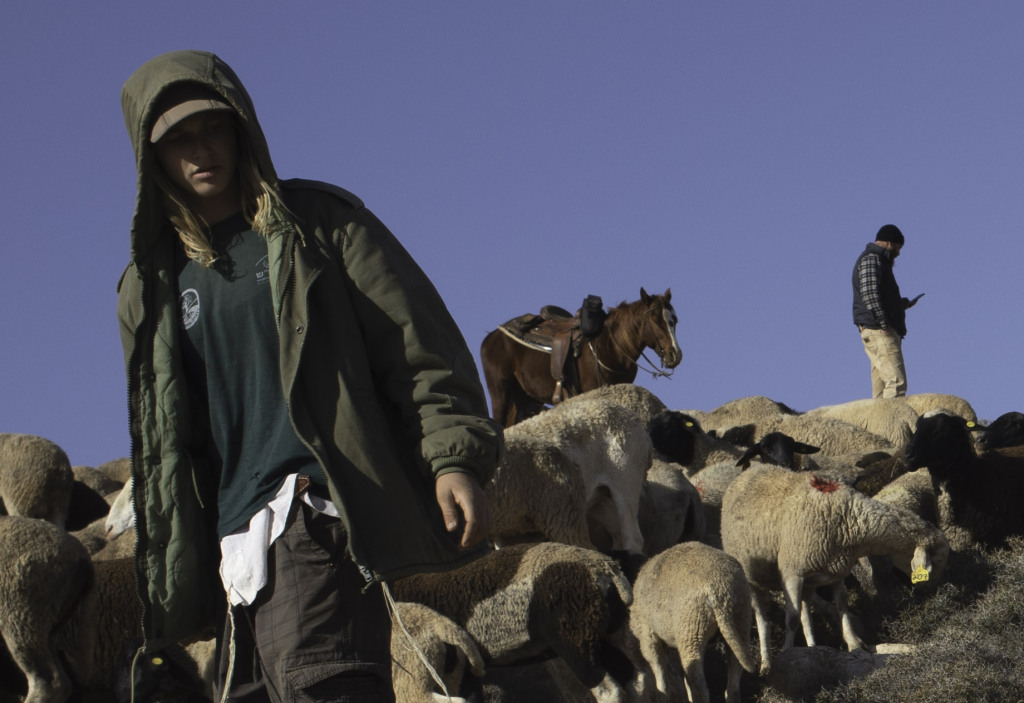 Settler-shepherds of the “Angels of Peace” outpost and elsewhere in the West Bank straightforwardly assert that they herd sheep in order to grab land.

They’re making a lot of noise, screaming at the sheep, and one of them – we’ll call him Goldilocks, because he has very long blonde hair, like a hippie of yore, rather out of context – has a loudspeaker that’s blaring raucous music, and waving the loudspeaker in his hands he literally starts dancing his way through the herd, enjoying every moment, jumping, twirling, hopping, running from stone to stone. The sheep don’t like it.

Both the settler boys are also yelling at us. Ra’id and the remnants of the herd are fleeing far downslope, toward the Valley. Nina manages to catch up with them and stays close, protecting them, while violence unfurls higher up.

Also read: In Al-Hamme, Palestinian Shepherds Are Being Driven Away

Guy is running after the young thugs, who are still dispersing the sheep; he moves fast, almost beyond belief, because the whole slope is nothing but hard jagged loops of rock and it’s almost impossible not to stumble and fall. I can’t keep up with him, but I’m trying. Then I see, maybe 30 meters away, how Goldilocks smashes into him, the dance now reduced to its vital core of hate.

I rush toward him, trying hard not to lose my footing on the rocks, and I see Goldilocks kick Guy’s feet out from under him as he topples Guy onto a long slab of stone, and for the three or four minutes it takes me to reach them Goldilocks is pummeling Guy with his fists and kicking him without pause, and Guy is caught but not hitting back, until finally Goldilocks lets go and backs off.

I wish I had used those minutes to photograph it. It would have made a difference. 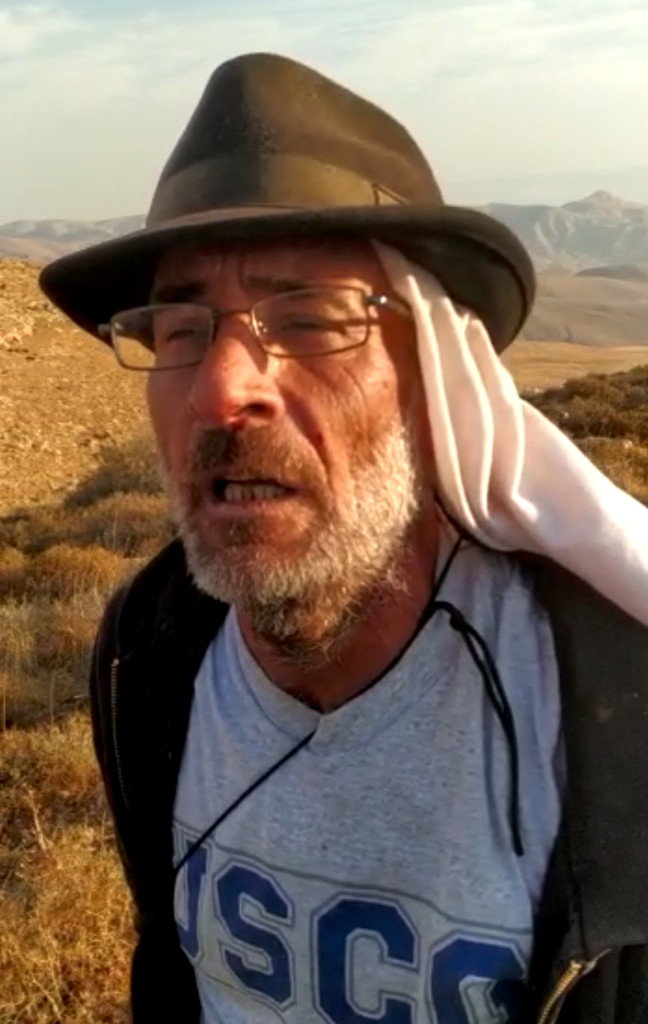 Guy gets to his feet. He is bleeding from the nose, and he has taken bad hits on his back and side. Photo: Still from video by David Shulman

Goldilocks is yelling loudly, something he thinks everyone, ovine and human, should know: “Guy attacked me.” He calls his friend, still busy with the sheep, and he calls Elchanan, the big guy in the outpost, with his happy news. Over and over again. “You’re the one who attacked,” I say, “I saw it all.” 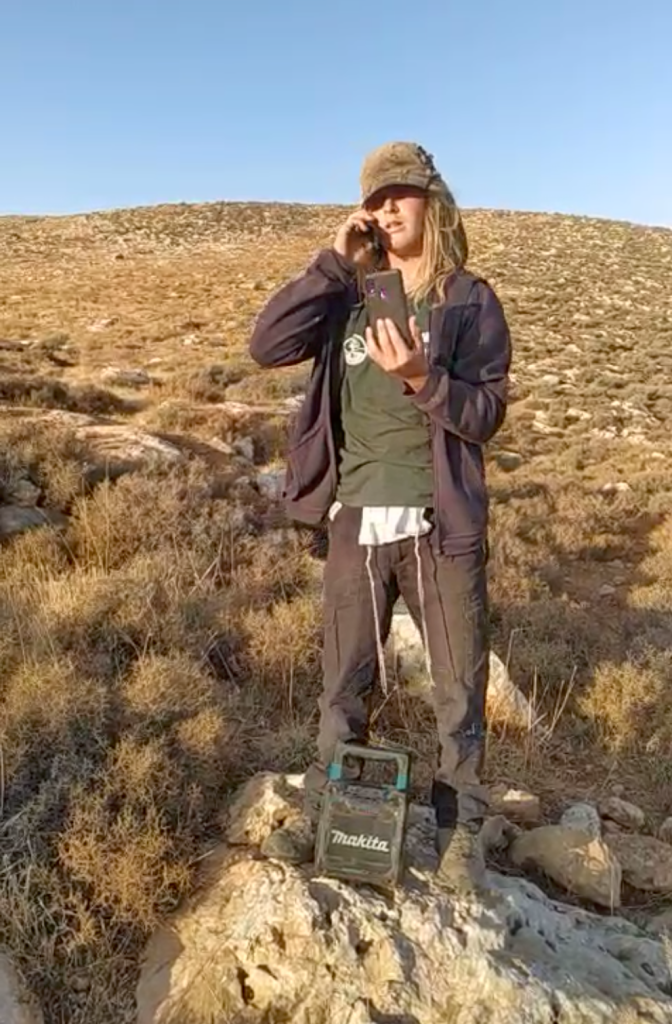 “You’re the liar,” says I. So it goes. Guy’s phone rings. It’s his daughter. “Abba, can you pick me up today after school?”

Then, from the mouths of these not-yet-men, maybe never-to-be-men, worthy of the name, the usual curses and insults and vicious words are spit out in a steady stream. Always the same trite, repetitive, infinitely impoverished thoughts, if you can call them thoughts. After a while, disgusted, furious, I say to them: “Have you ever heard that God said, ‘Thou shalt not steal’? It’s in the text.” “Oh,” one says, “so you agree that these are the texts.”

“Of course,” says I, “they are texts. I know them a little. You and I could compete to see who knows them better.” For a moment, he’s off balance. Only a moment. “But you just select whatever text you happen to like and forget all the others,” says Goldilocks. “You know,” says I, “that sentence about not stealing seems to me unequivocal. Doesn’t require a lot of commentary.” Then I can’t resist adding: “And because you are stealing the land and the livelihood and the lives of these shepherds, who are people just like us, one day—maybe sooner than you think—you won’t be living here. Remember what I told you.” Goldilocks smiles. 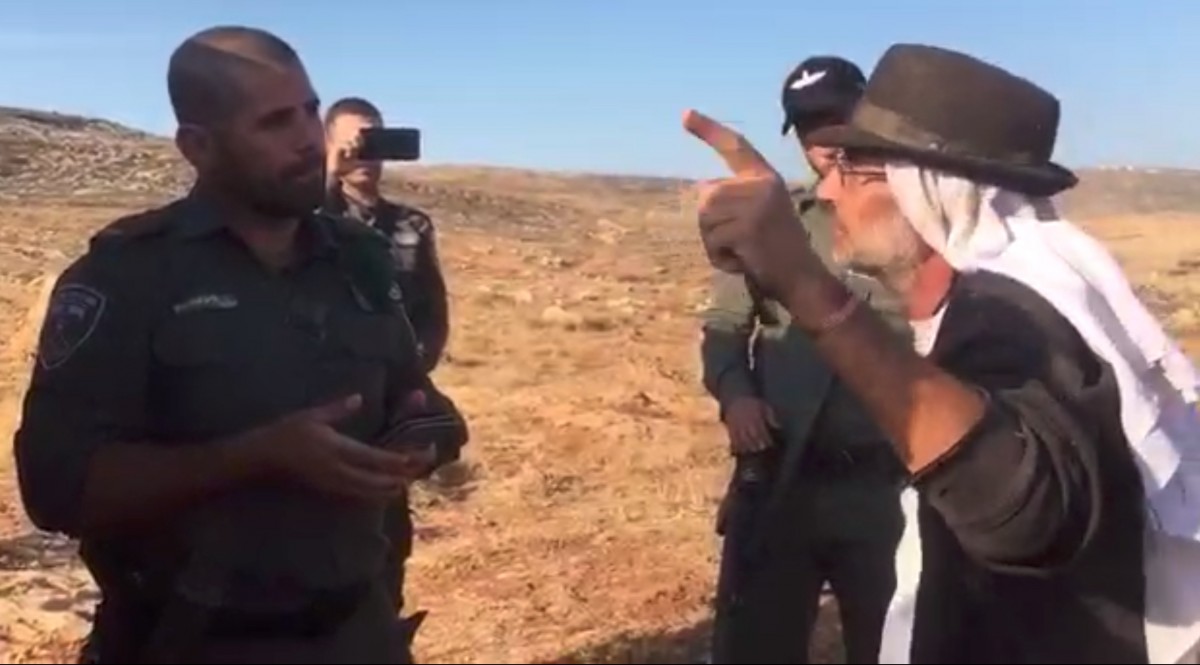 We climb back up over the hills, weary now, though it’s only 7:45, and coming toward us are two army jeeps and one police car. Just an hour late. We tell them what happened. They take our identity cards. They’re not hostile this time, not the soldiers, not the policemen. Elchanan, however, the arch-settler, arrives, and they all shake hands, as usual. They’re friends, sort of. One of the soldiers says to us, “This wouldn’t have happened if you hadn’t come here this morning.” Which must, in some crooked way, be true. 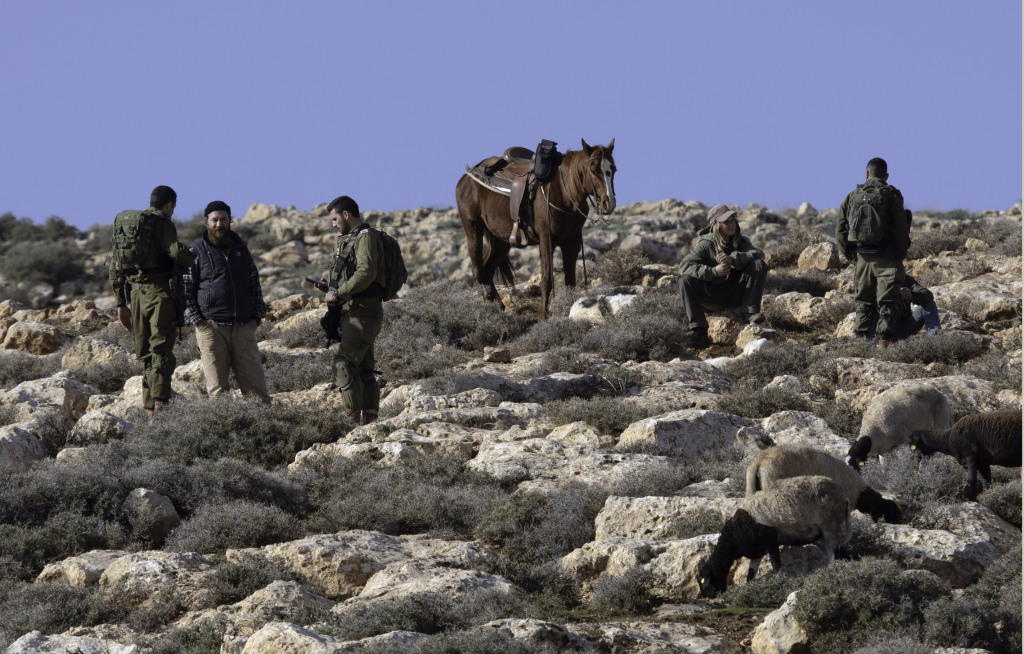 The shepherds in the tents welcome our return, and they are eager to hear the story. They are sad. Again and again they say, “Mit’asfin—we are sorry.” We tell them we’re OK, it’s all OK, and that if they stand firm over the coming days, things will get better, there will be some quiet. More tea and a rough breakfast of pita, olive oil, tomatoes. I can see our hosts are moved.

Guy recalls the moment—April 21, 2017—when fifteen settlers attacked the Ta’ayush activists at al-‘Auja Foq, Upper ‘Auja, and many were badly hurt, head wound, broken foot, deep hits. Soon after that, there was a demonstration against another new outpost in the northern Valley. At first the ‘Auja Palestinians were hesitating about coming to join us, but then they decided: “If you have lost blood for our sake, we cannot say no to you now.” 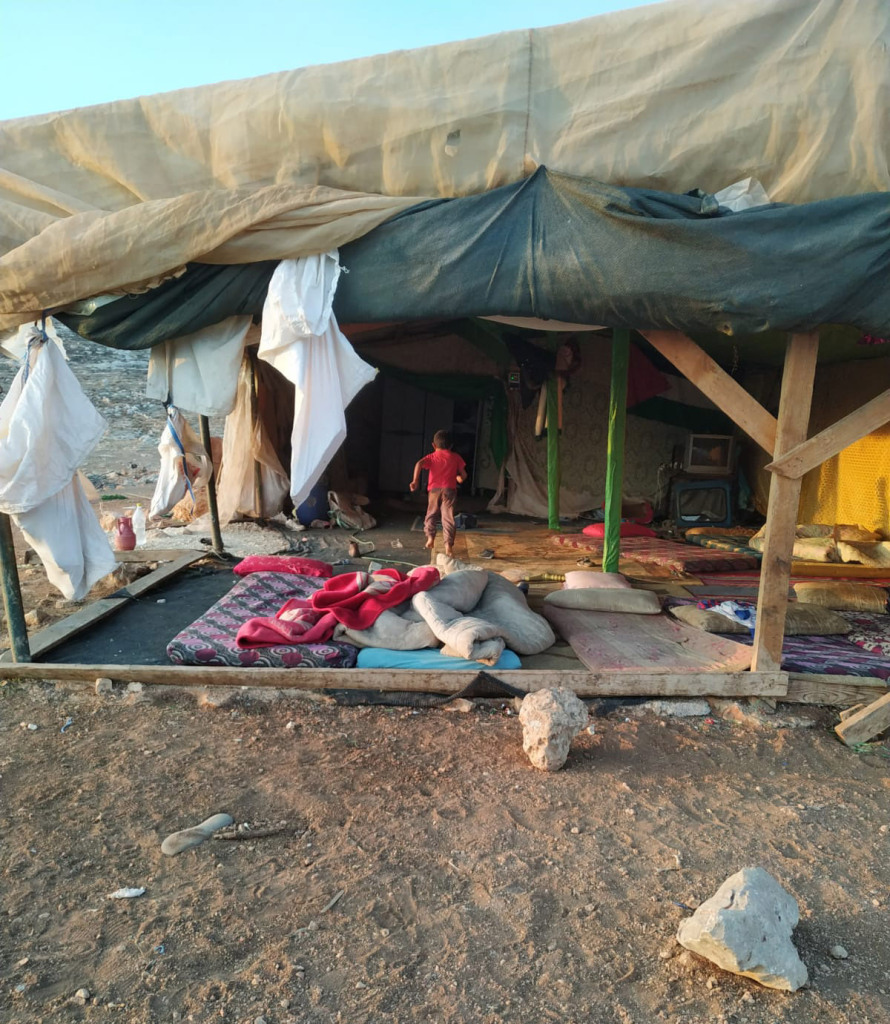 We drive to the Binyamin police station to file a complaint against Goldilocks. It takes time; it’s cold in the station; we wait. Our pictures aren’t good enough, but there is one eyewitness, me,  whose testimony might count for something. The policewoman takes down Guy’s statement, then mine. Meanwhile, other guests arrive at the station to file a complaint (against Guy).

Also read: In Palestine, Memory is a Living, Haunting Thing

It’s Goldilocks and an obese, wildly unkempt, ugly giant of a settler, maybe some terrible ersatz father? We’ve seen him before. He seems to call the shots at “Angels of Peace.” The waiting room is rife with the intimacy of enmity and struggle. But Goldilocks is looking rather deflated, slouching, sullen, awkward, like a kid lost in the world. Maybe hitting and hurting and screaming and lying don’t really suit him. Maybe it’s not such a fun dance after all, especially when it’s over.

Until the next time. 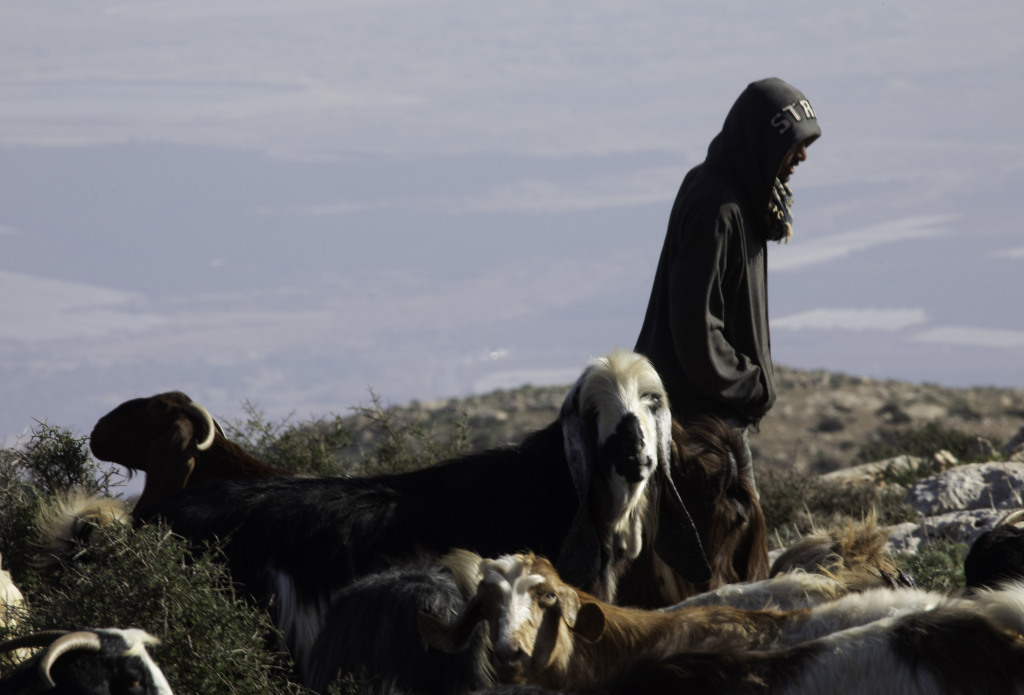 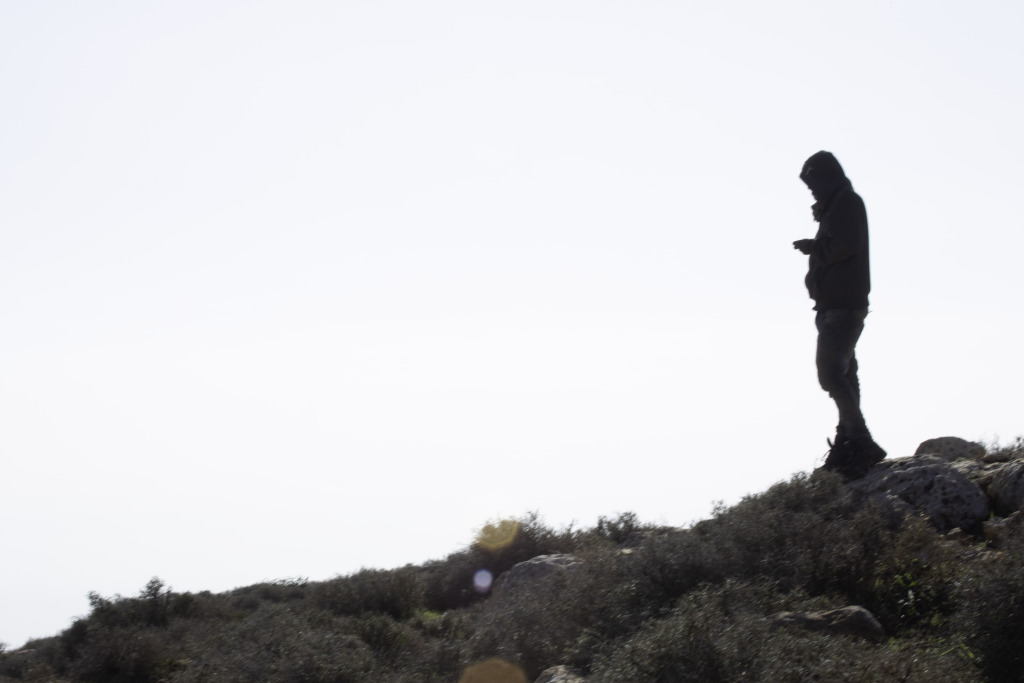 Most photographs and video stills were taken during the activities described in this post. The unidentified photographs were taken in ‘Ein Rashshash in December, 2018, by Margaret Olin.

Margaret Olin teaches visual theory, photography theory and history, visual culture and Jewish visual studies at Yale University. David Shulman is an Indologist and an authority on the languages of India. A Professor Emeritus at the Hebrew University of Jerusalem, he is an activist in Ta’ayush, Arab-Jewish Partnership.