In Occupied Palestine, Children Come in the Line of Fire

Palestine has been under Israeli military occupation for decades. The author spent three months at the beginning of 2018 in West Bank, Palestine. Here, he writes about violence Palestinian children face from the Israeli forces. 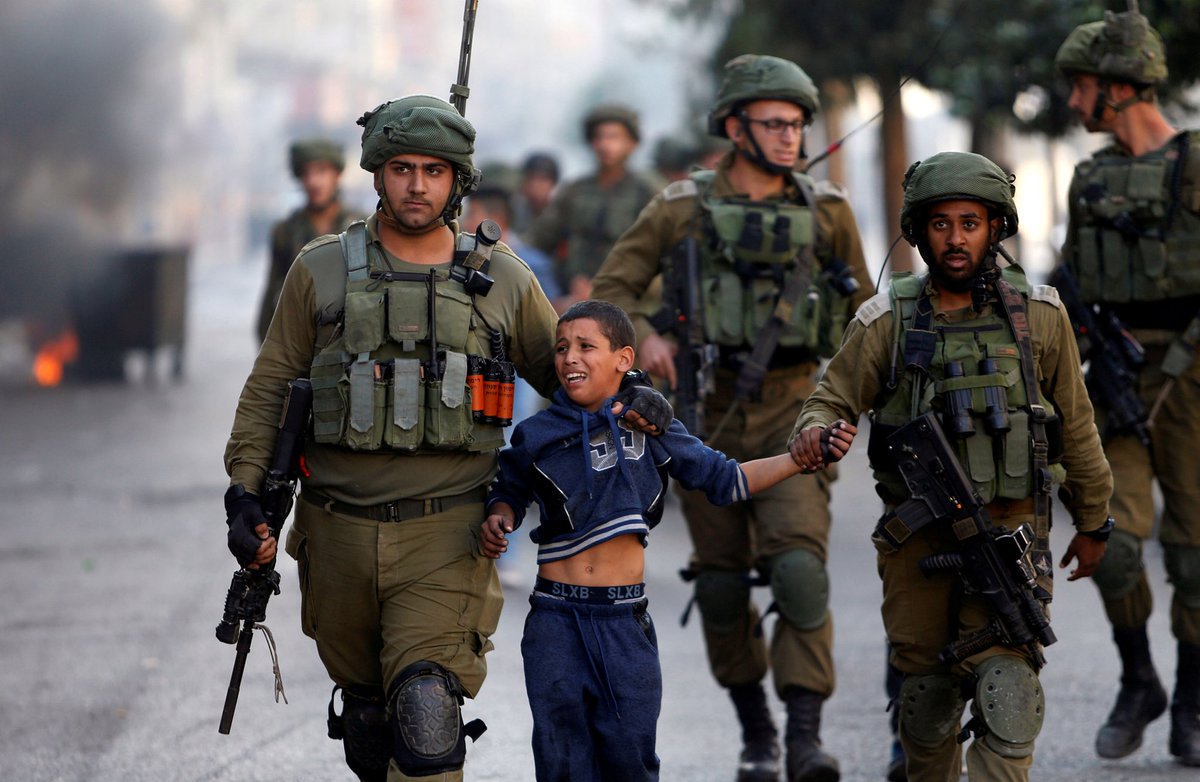 This is the fourth in a series of articles. You can read the first article here, the second here and the third here.

“There is no justice under occupation”, said 17-year-old Palestinian Ahed Tamimi after being sentenced to eight months in prison and fined $1,500 by an Israeli military court for slapping an Israeli soldier who had forcibly entered her home.

Of all the uncertainties, dangers and violence Palestinians face every day of their lives, perhaps nothing is as tragic as the violence pervading the lives of their children.

Indiscriminate use of tear gas and ‘skunk water’

The Palestinian village of Nabi Saleh close to Ramallah in the West Bank holds weekly demonstrations against the theft of their land and water by the nearby illegal Israeli settlement. Consistent with their intolerance of any hint of Palestinian dissent, Israel has responded by installing a sniper tower on the road leading to the village.

While visiting the village, I found the mere act of walking by the sniper tower an intimidating experience. A surveillance balloon floats high above watching the whole area. The village is frequently invaded by Israeli forces tear gassing and firing on them with callous disregard to the presence of children. I took the picture below of a child playing with spent tear gas canisters that the family has collected in barrels to demonstrate their plight to the world. 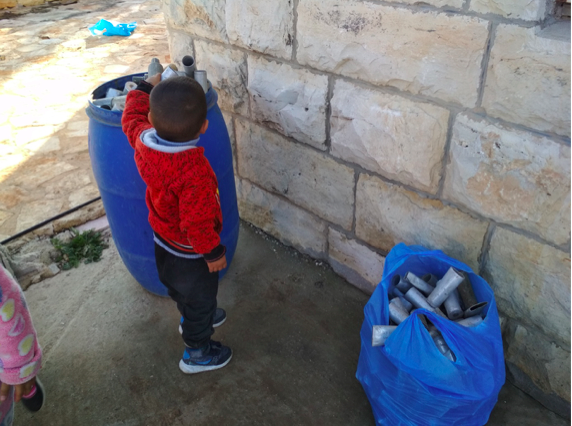 A child of the Tamimi family in the village of Nabi Saleh picking through barrels full of spent tear gas canisters frequently fired on them by raiding Israeli forces. This scene is outside Ahed Tamimi’s house.

Hebron is perhaps the most disturbed city in the West Bank due to Israeli settlers illegally occupying the very heart of the city. They are backed by vast Israeli military and security infrastructure ostensibly to “protect” them. One of the most chilling impacts of the occupation in Hebron has been on Palestinian school children who are forced to cross Israeli checkpoints on the way to and from school. Israeli soldiers are not kind to them.

I met a group of international activists in Hebron called the Christian Peacemaker Teams. Every morning and afternoon, they post themselves at the checkpoints that students pass through, documenting the actions of soldiers and settlers. While sharing a late morning coffee, one of them told me that the soldiers had tear-gassed a group of school children that morning for absolutely no reason. When I asked what purpose that served, he suggested it could have been done out of sheer boredom. He should know, he has been an international observer in Hebron every year for the past 18 years.

A UC Berkeley School of Law study found that the Aida refugee camp in Bethlehem, West Bank is the most tear-gassed community in the world. The exact chemical makeup and the long-term effects of the gas are unknown. Since no good can come of it, the only question is how severe, if not lethal, the consequences are for children exposed continually since birth. 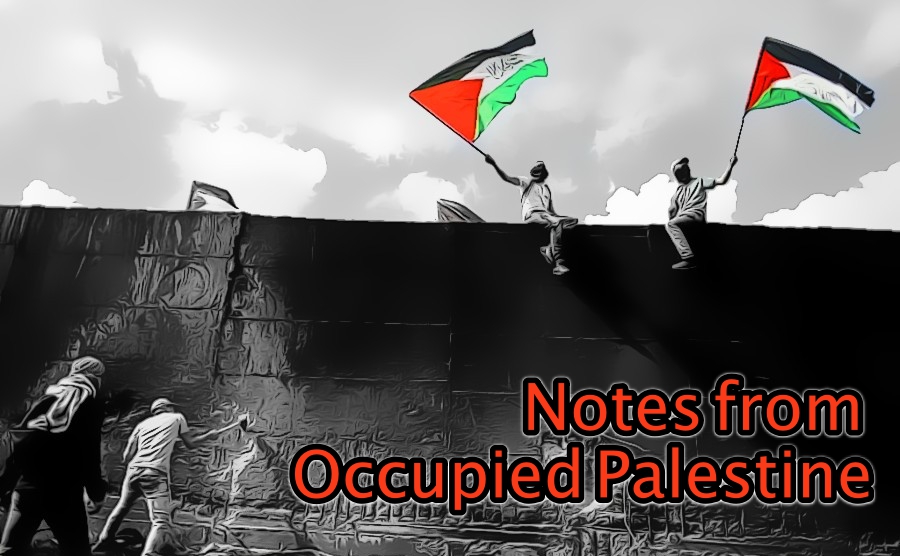 In the past ten years, Israel has started using a putrid concoction called “skunk water” against demonstrators, one that emits a stench described as a combination of rotting corpse, raw sewage and human excrement. It is so powerful that, once sprayed, it can take weeks to completely wash off. Taken out of context, that may seem like an effective non-lethal means of crowd control. The problem is that Israeli forces regularly douse entire Palestinian neighbourhoods in skunk water. This video shows Israeli forces spraying a school in East Jerusalem at night. The school remained shut for two days after the event.

I watched heavily armed soldiers continually patrolling the streets of Hebron, often targeting children on the “suspicion of throwing stones”. Time and again, random children are picked up for questioning or worse, detained such as in this video of them dragging away a terrified eight-year-old boy, in this video cornering and intimidating school children, this one of an abortive attempt at arresting a ten-year-old child followed by tear gassing other school children and this one where a six-year-old is detained. These tactics are the norm and not the exception.

Israel arrests, detains and prosecutes 500-700 Palestinian children in military courts every year and is the only country in the world that automatically prosecutes children in military courts. The conviction rate is 99.74%. Many children are seized from their bed in late-night raids, bblindfolded handcuffed and placed in “administrative detention” without charge or trial. Seventy-five percent of Palestinian children detained by Israeli forces are “subjected to treatment that meets the definition of torture”. The Al-Haq human rights organisation reports that “a change in regulations [since September 2015] has also resulted in an apparent “shoot-to-kill” policy, where the IOF [Israeli Occupation Forces] has been acting as judge, jury and executioner”.

Children have been placed in solitary confinement for up to four weeks in what amounts to egregious violations of international laws on protection of children. Amnesty International, Human Rights Watch, Defense for Children International-Palestine and even the US State Department have repeatedly indicted Israel for using unnecessary and disproportionate force while arresting or detaining children and torturing them in prison. Sadly, these have had little effect on Israeli policies.

Injuries and fatalities occur for different reasons in the West Bank and in Gaza.

In the West Bank, injuries and fatalities generally occur in the context of military incursions, demonstrations against Israeli settlements or the separation barrier, or as a result of settler attacks against Palestinian children.

In Gaza, the majority of injuries and fatalities are caused by Israeli strikes and full-scale offensives. Some are the result of shooting at the Gaza border fence.

Defense for Children International-Palestine reported over 2,000 children killed from 2000-2017, 514 of them being under eight years. In the 2014 bombing of Gaza, nearly half of the children killed (248 of 546) were under eight-years-old. The majority of these deaths have occurred in Gaza during non-selective Israeli invasions and bombings outside the context of “clashes”. 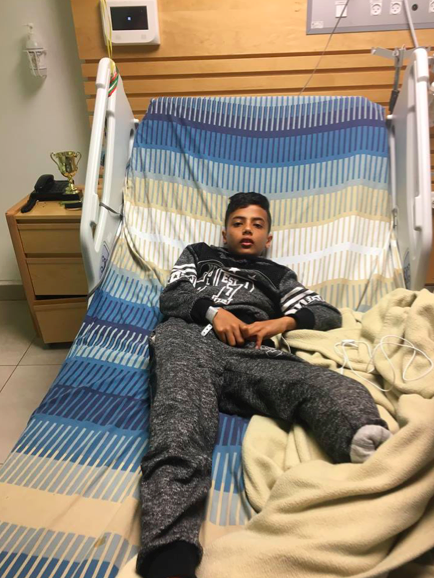 A massive non-violent grassroots movement started in Gaza on March 30, with tens of thousands marching to the border with Israel. They were demanding their right to return to their ancestral lands that they were forcibly evicted from in 1948 when the new Israeli State came into being. As usual, Israel has responded with crushing force where snipers have shot over 5,000 and killed at least 45 Palestinians (as of May 4).

The Office of the United Nations High Commissioner for Human Rights wrote on April 27:

“The impact on children is of great concern. Since 30 March 2018, four children have been shot dead by Israeli forces, three of them by a bullet to the head or neck. A further 233 children have been injured by live ammunition, with some sustaining injuries that will result in lifelong disabilities, including through the amputation of limbs.”

Israel is also reportedly experimenting on Gazans with a new kind of artillery (“butterfly bullet”) that explodes on impact causing wounds far more severe than regular bullets. Those shot with such artillery are in grave danger of remaining maimed and disabled for life.

I took the photographs below in the Aida refugee camp in Bethlehem, West Bank. It is United Nations Relief and Works Agency administered school that has no windows in order to protect their children from Israeli fire. Indeed, the next picture is of one of the gates of the school pockmarked with bullet holes. An Israeli observation and sniper tower ominously stands a few meters away. 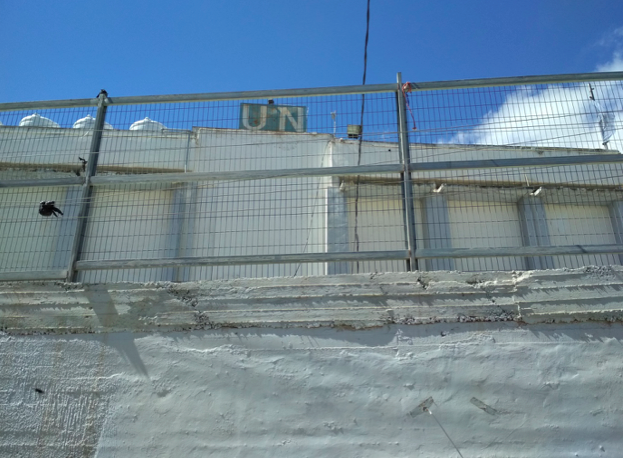 A UN administered school in the Aida refugee camp in Bethlehem in the West Bank of Palestine. The school is without windows to protect students from Israeli fire. 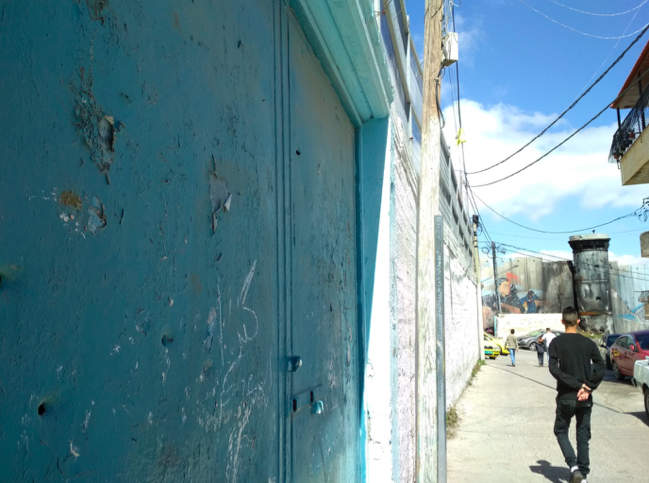 Gate to the school pockmarked by bullet holes and an Israeli observation and sniper tower only a few meters away.

The effect of such sustained violence on children’s education can hardly be overstated. Again, there are differences between the West Bank and Gaza.

Children in the West Bank face the daily threat of being tear gassed, sprayed with skunk water, being arbitrarily detained or completely blocked at various check points on the way to school. Long incarceration on flimsy grounds is another major way in which children lose out on education.

Gaza is another story. In a major offensive in 2014, Israeli forces bombed several UN schools in Gaza that were sheltering large numbers of civilians, killing sleeping children in at least one case. In addition, the water tight blockade of Gaza allows little construction material through to repair damaged buildings. Combined with power supply for barely four hours a day, the challenges to education are enormous.

Yet, the literacy rate in Gaza was an astonishingly high 97% in 2016 (male literacy 99% and female literacy 95%). It has also been tracking steadily upwards over the years. Such stupendous rates of literacy despite the adverse circumstances can only be achieved by an incredible commitment to education. 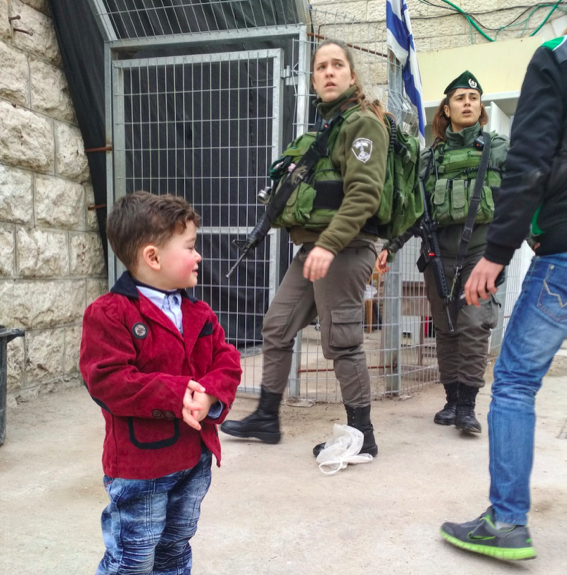 Palestinian children grow up constantly surrounded by heavily armed Israeli military and police, losing their innocence to the brutality and aggression of the occupying forces.

Palestinian children overwhelmingly suffer from mental disorders such as depression, anxiety and sleeping problems on account of the unending violence and trauma that they go through. This serves to have a chilling effect on their families. As an Al-Haq report observes, “The psychological harms of the Israeli occupation are not an unfortunate side-effect of its policies, but rather a tactic utilized by Israel to constantly remind the Palestinian population that it is subjugated and occupied.”

Presumably all the more effective when directed against the next generation.

There is indeed no justice under occupation.