US Vetoes UN Resolution Condemning Israel for Violence Against Palestinians

After many Palestinian protestors were killed on the Gaza border by Israeli forces, US vetoed the UN resolution stating its bias and failure to blame Hamas, on the other side, for inciting deadly protests. 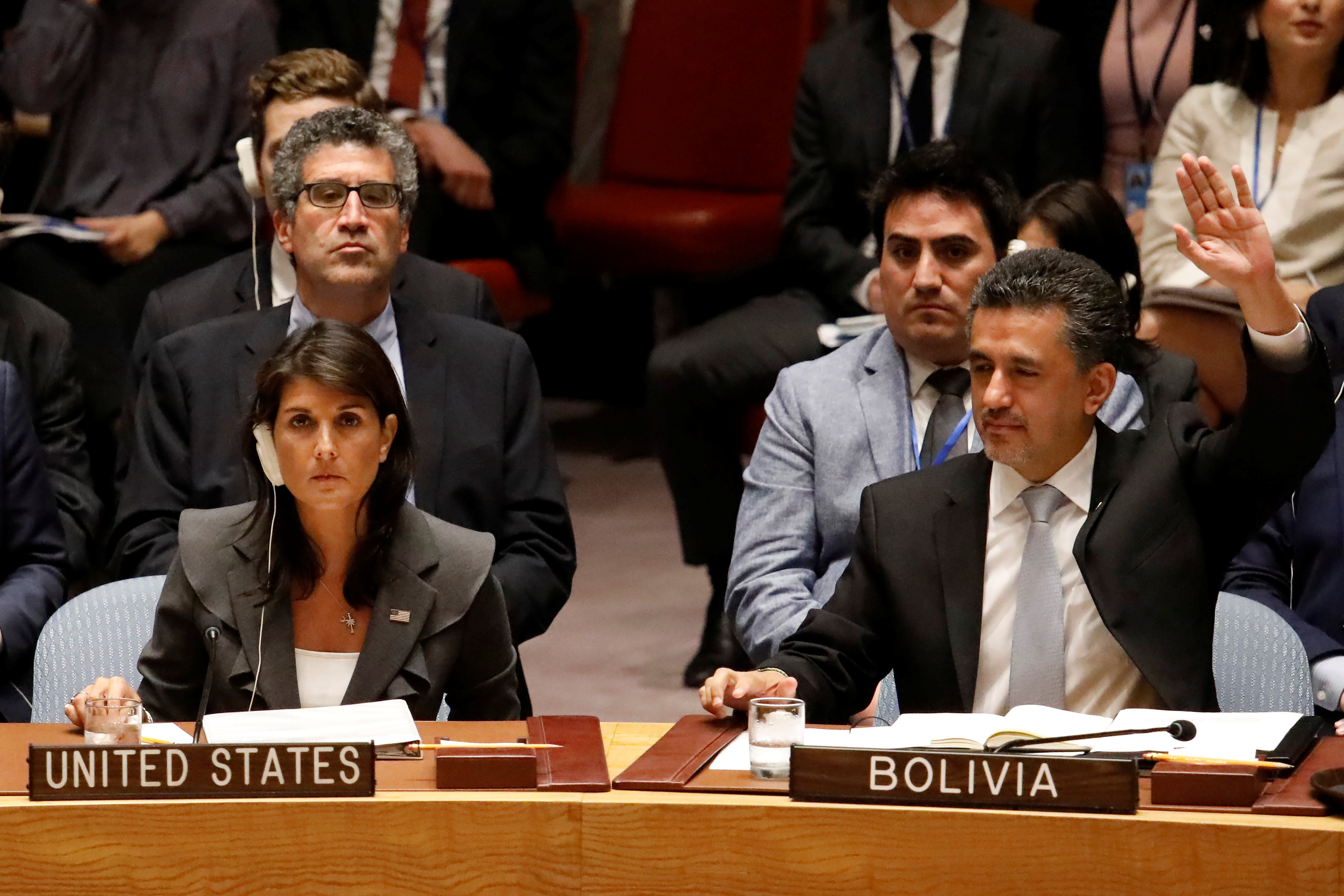 US Ambassador to the United Nations Nikki Haley vetoes a vote as Bolivian Ambassador Sacha Llorenty votes for a Arab-backed resolution for protection of Palestinian civilians during a Security Council meeting at UN headquarters in Manhattan, New York, US, June 1, 2018. Credit: Reuters/Shannon Stapleton

United Nations: The US vetoed a Kuwaiti-drafted UN Security Council resolution that condemned Israel’s use of force against Palestinian civilians, underlining Washington’s differences with friends and foes alike over the Israeli-Palestinian issue, on June 1st.

Later, a second, US-drafted resolution that blamed Hamas for the violence and upheld Israel’s right to defend itself failed to attract any other country’s support when it was put to vote in the 15-member council.

Blasting the council majority, US Ambassador to the United Nations Nikki Haley said the two votes showed it was willing to blame Israel and unwilling to blame Hamas, the Islamist group that dominates Gaza.

“It is now completely clear that the UN is hopelessly biased against Israel,” she said in a statement.

France, Russia, China, Ivory Coast, Kazakhstan, Bolivia, Peru, Sweden, and Equatorial Guinea joined Kuwait in voting in favour of the first draft. Britain, the Netherlands, Poland and Ethiopia abstained. Only the US voted against.

To be adopted, a Security Council resolution needs to receive at least nine votes in favour and no vetoes by any of the permanent members – the US, Britain, France, Russia and China.

Only the US voted in favour of the second draft resolution, while there were three negative votes and 11 abstentions.

At least 116 Palestinians have been killed by Israeli forces in Gaza border protests since March 30. The largest number of killings occurred on May 14, the day the US moved its embassy in Israel to Jerusalem from Tel Aviv.

Amid international condemnation of its use of lethal force, Israel said many of the dead were militants and that the Israeli army was repelling attacks on the border fence between Israel and Gaza. Washington has maintained Israel’s right to defend itself and refrained from joining calls for Israeli restraint.

Palestinians and their supporters said most of the protesters were unarmed civilians and Israel was using excessive force against them.

Over the years, the US has vetoed a number of Security Council resolutions critical of Israel. In December, it vetoed an Egyptian-drafted resolution calling on President Donald Trump’s administration to reverse its decision to recognise Jerusalem as Israel’s capital.