Government promises of reforms have done little to appease protesters' demands for a complete overhaul of the system. Iraqi security forces stand in front of demonstrators during a protest over corruption, lack of jobs, and poor services, in Baghdad, October 25, 2019. Photo: Reuters/Thaier Al-Sudani

Iraqi security forces killed 10 and wounded dozens on Thursday in another day of deadly protests that show no sign of letting up.

In central Baghdad, security forces fired live rounds and tear gas at demonstrators who were attempting to remove barricades blocking their protest march. Six were killed and at least 41 injured.

The protesters were trying to access two bridges leading to a high-security area called the Green Zone on the west bank of the Tigris River, home to many government buildings. Security forces have since reinforced the bridges and all entrances to the area.

In the southern city of Basra, four more demonstrators were killed when security forces opened fire on a sit-in protest that had been going on for days. 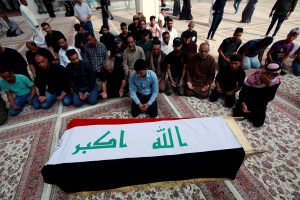 Iraqi men mourn over the coffin of a demonstrator who was killed at anti-government protests, during a funeral at the “Valley of Peace” cemetery in Najaf, Iraq, November 4, 2019. Photo: Reuters/Alaa al-Marjani

At the port of Umm Qasr in the south, protesters that included family members of a demonstrator killed in earlier protests burned tires and blocked trucks arriving with essential food shipments, shutting the port down hours after it had reopened.

Earlier this week protesters halted the movement of fuel tankers at a nearby refinery. Operations there resumed Thursday.

Too little too late

Over 260 people have been killed since protests erupted on October 1. Thousands of protesters, largely unemployed young people, have participated in ongoing demonstrations against the poor quality of life in the country.

In response to the protests, the government has promised reforms and new elections. But those plans, which could take months to implement, have had no effect on appeasing frustrated demonstrators, who demand a complete government overhaul.