With Trump Ignoring EU Interests in Iran, the Western Alliance Gets Weaker

About 37% of Iran’s oil exports go to European destinations. All told, the EU is Iran’s number one trading partner. 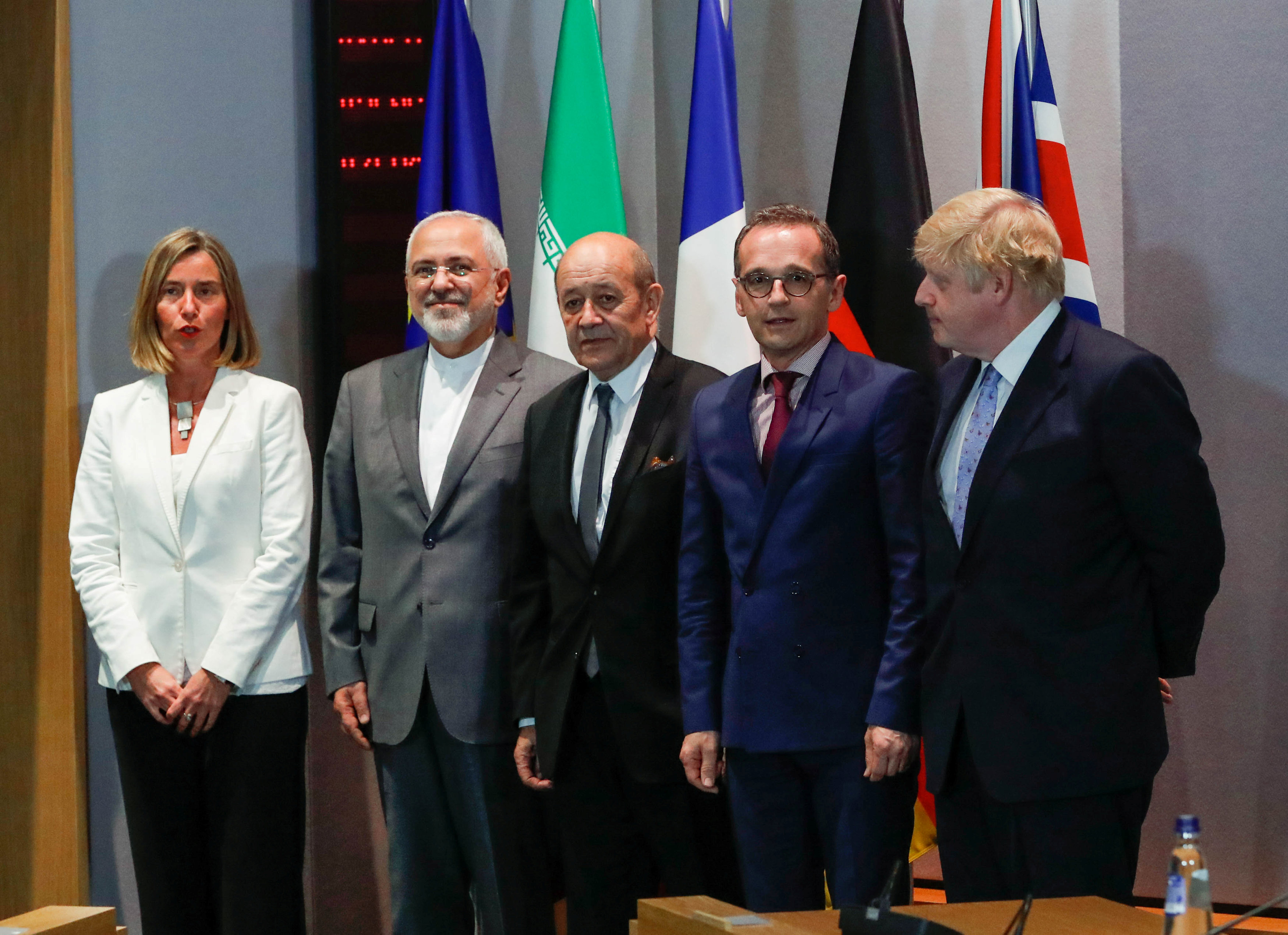 London: In addition to effectively tearing up the Iran nuclear deal on May 8, US President Donald Trump announced the re-imposition of American sanctions in place before the landmark agreement. These covered the Islamic Republic’s energy, banking and other sectors, with a provision for penalising foreign businesses worldwide trading with or investing in Iran. This act of economic and diplomatic unilateralism undermining the Western alliance is welcome news for Russian President Vladimir Putin as well as Iran’s Supreme Leader Ayatollah Ali Khamenei.

The premise of the nuclear deal – officially called the Joint Comprehensive Plan of Action, or JCPOA – signed by Iran, the five permanent members of the UN Security Council plus Germany and the European Union – was to let Iran rejoin the global economy in exchange for denuclearisation. Trump’s decision undermines the JCPOA’s foundation. Before his rash move on Iran, Trump had angered the 28-member EU by refusing to grant it an exemption from the tariffs he imposed on steel and aluminium imports in March. An American president is authorised to take such action to protect national security. EU officials argued that their bloc is a US ally – all members but Sweden are members of Washington-led NATO – but to no avail.

“We are witnessing today a new phenomenon: the capricious assertiveness of the American administration,” said Donald Tusk, president of the European Council, on the eve of the EU summit in Sofia, Bulgaria, on 16 May. “Looking at the latest decisions of President Trump, some could even think, ‘With friends like that, who needs enemies?’” After the summit, Tusk announced that EU members agreed unanimously to stay in the agreement as long as Iran remains fully committed: “Additionally, the [European] Commission was given a green light to be ready to act whenever European interests are affected.” Jean-Claude Juncker, president of the EU’s executive arm, the European Commission, said that to protect EU companies doing business with Iran, he would turn to a plan last used to shield European businesses active in Cuba facing sanctions: “the ‘blocking statute’ process, which aims to neutralise the extraterritorial effects of US sanctions in the EU.” He did so on May 18.

The 1996 statute prohibits EU companies and courts from complying with foreign sanctions laws and stipulates that foreign court verdicts based on these laws are null and void in the EU. Juncker added that the European Investment Bank will also provide a funding stream for businesses working in Iran. This has reassured small- and medium-sized EU companies since most have no presence in the United States. Large multinationals doing business in the United States are seeking specific exemption from Washington. Their chances of success, though, are slim.

By happenstance, on May 16, the National Iranian South Oil Company signed an agreement with London-based Pergas International Consortium to develop the Keranj field in the oil-rich Khuzestan province over the next decade.

Though in his election campaign Trump had attacked the JCPOA as a “bad deal,” he granted waivers from re-imposing sanctions thrice because his three senior advisers – secretaries of state and defence, and the national security adviser – urged him to do so. But following his sacking of Rex Tillerson and the resignation of H.R. McMaster, Trump appointed Mike Pompeo and John Bolton secretary of state and national security adviser, respectively. Both are super-hawks against Iran. And secretary of defence James Mattis may have decided against pushing too hard his argument that exiting the JCPOA would cause serious rupture with European allies and tarnish Washington’s credibility in the world. A woman carries a picture of Iran’s Supreme Leader Ayatollah Ali Khamenei at an event marking Resistance and Liberation Day in the Bekaa Valley, Lebanon, May 25, 2017. Credit: Reuters/Hassan Abdallah/File Photo

The other important factor was Trump’s imminent meeting with North Korea’s leader Kim Jong-un. Along with Bolton, Trump reckoned that withdrawal from the Iran deal would make Kim realise that he did not issue empty threats, thus easing his path to get what he wants. Overall, when dealing with a foreign regime that refuses to kowtow to Washington, the policymakers advocate either changing its behaviour through economic and diplomatic pressure, or overthrowing the offending government through relentless destabilisation or military force. Within that frame, Mattis belongs to the behaviour camp and Bolton firmly to the regime-change camp.

Trump’s 11-minute address on May 8 explaining his exit from the Iran deal had Bolton’s imprint. After that speech, Bolton told the reporters that the United States ceased to accept UN Security Council Resolution 2231 endorsing the JCPOA. As an official in the George W. Bush administration, Bolton advocated invading Iraq and remained unapologetic about his stance. In his 25 March 2015 op-ed in The New York Times, Bolton summarised as argument pithily: “To Stop Iran’s Bomb, Bomb Iran.” In a July 2017 speech to the conference of the Paris-based anti-Islamic Republic organisation, Mujahedin-e Khalq, or People’s Mujahedin – listed as a terrorist organisation from 1997 to 2012 by the US State Department – Bolton expressed hope that the Iranian regime would be overthrown “by 2019,” that year being the 40th anniversary of the Islamic Republic.

Bolton and his supporters seem to have a particular scenario in mind. Economic pressure applied by US sanctions and military pressure by Israel, starting with its attacks on Iranian military targets in Syria, will generate momentum for the overthrow of the regime. Such a scenario is untethered to reality.

The most effective tool in former President Barack Obama’s economic armory was to slash Iranian oil exports by isolating Iran’s Central Bank from the global banking system – and the fact that Iranian oil prices are quoted in US dollars. At present, of the 2.6 million barrels per day of oil that Iran ships to foreign destinations, compared to 1.1 million per day before 2015, almost half goes to China and India, with China in the lead. Both countries were main buyers of Iran’s petroleum before 2012. They managed to circumvent harsh US and EU sanctions. During 2012 to 2015, Chinese oil companies used a domestic bank, Bank of Kunlun, to settle petroleum transactions with Iran, worth tens of billions of dollars, in euros and Chinese renminbi.

Unsurprisingly, therefore, in the wake of Trump’s May 8 decision, Beijing was the first foreign capital visited by Iran’s foreign minister Mohammad Javad Zarif along with top oil officials. After meeting with his counterpart, Wang Yi, both sides stated they would remain in the JCPOA.

In the case of India, a rupee-rial mechanism was put in place after 2012, whereby almost half of India’s oil imports from Iran were paid in exchange for such items as rice, wheat and medicines not under sanction. According to Ram Upendra Das, head of the Centre for Regional Trade, US sanctions are unlikely to have any material impact on Indian exports to Iran since there are several mechanisms through which payments can be made for bilateral trade.

About 37% of Iran’s oil exports go to European destinations. All told, the EU is Iran’s number one trading partner. The value of trade between the EU and Iran soared from $9.2 billion in 2015 to $25 billion in 2017. Given EU leaders’ resolve to nullify the extraterritorial application of US sanctions on Iran, trade between their bloc and the Islamic Republic is unlikely to dip. The angry parting of the EU from the Trump administration over the Iran nuclear deal is set to become a milestone in the weakening of the Western alliance forged 70 years ago in the form of NATO.

This article was originally published on YaleGlobal Online.