'Iran is now subject to the most severe internet restrictions since the November 2019 massacre,' NetBlocks has said. 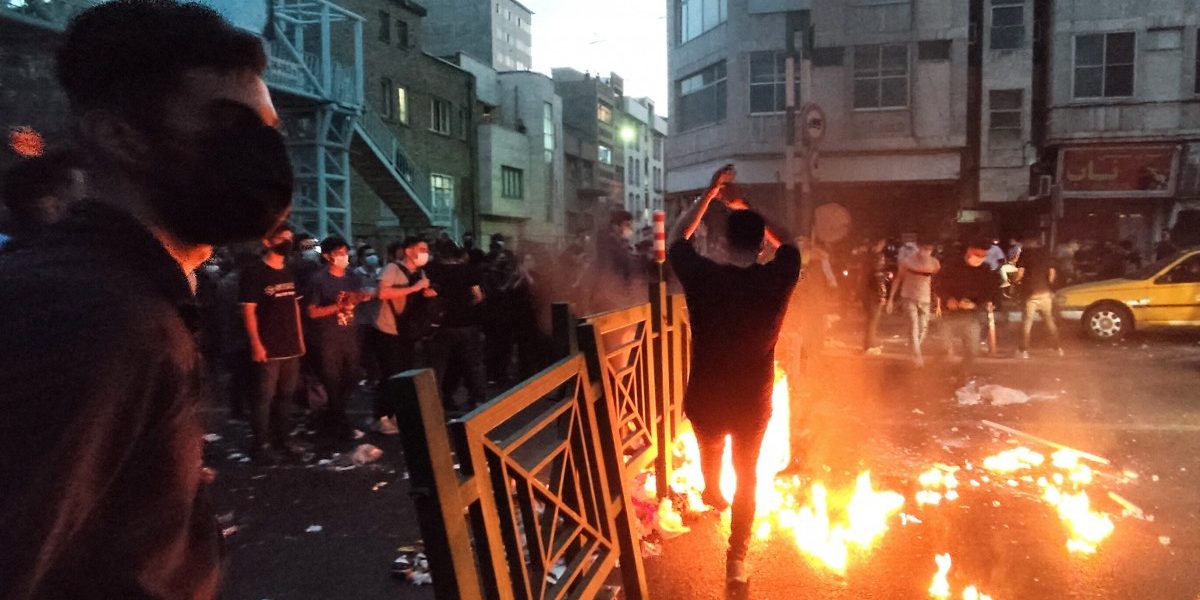 People light a fire during a protest over the death of Mahsa Amini, a woman who died after being arrested by the Islamic republic's "morality police", in Tehran, Iran September 21, 2022. Photo: WANA (West Asia News Agency) via Reuters

Dubai: Iranian authorities and a Kurdish rights group reported rising death tolls on Wednesday as anger at the death of a woman detained by the morality police fuelled protests for a fifth day and fresh restrictions were placed on social media.

Iranian media and a local prosecutor said four people were killed in the last two days, bringing the total death toll according to official sources to eight, including a member of the police and a pro-government militia member.

The demonstrations erupted over the death in detention last week of Mahsa Amini, a 22-year-old from Iranian Kurdistan who was arrested in Tehran for “unsuitable attire”.

The protests, which were concentrated in Iran’s Kurdish-populated northwestern regions but have spread to at least 50 cities and towns nationwide, are the largest since a wave of demonstrations in 2019 over gasoline price rises.

Reports from Kurdish rights group Hengaw, which Reuters could not verify, said 10 protesters had been killed. Three died on Wednesday, adding to the seven people the group said had been killed by security forces.

The scenes in Iran are astonishing. How far will these protests go?
pic.twitter.com/AJeHB0yyYB

Officials have denied that security forces have killed protesters, suggesting they may have been shot by armed dissidents.

With no sign of the protests easing, authorities restricted access to the internet, according to accounts from Hengaw, residents, and internet shutdown observatory NetBlocks.

Activists expressed concern that the internet shutdown echoed a government move before a crackdown against the 2019 fuel price protests, when Reuters reported that 1,500 people were killed.

NetBlocks and residents said access had been restricted to Instagram – the only major social media platform that Iran usually allows and which has millions of users – and that some mobile phone networks had been shut down.

“Iran is now subject to the most severe internet restrictions since the November 2019 massacre,” NetBlocks said. 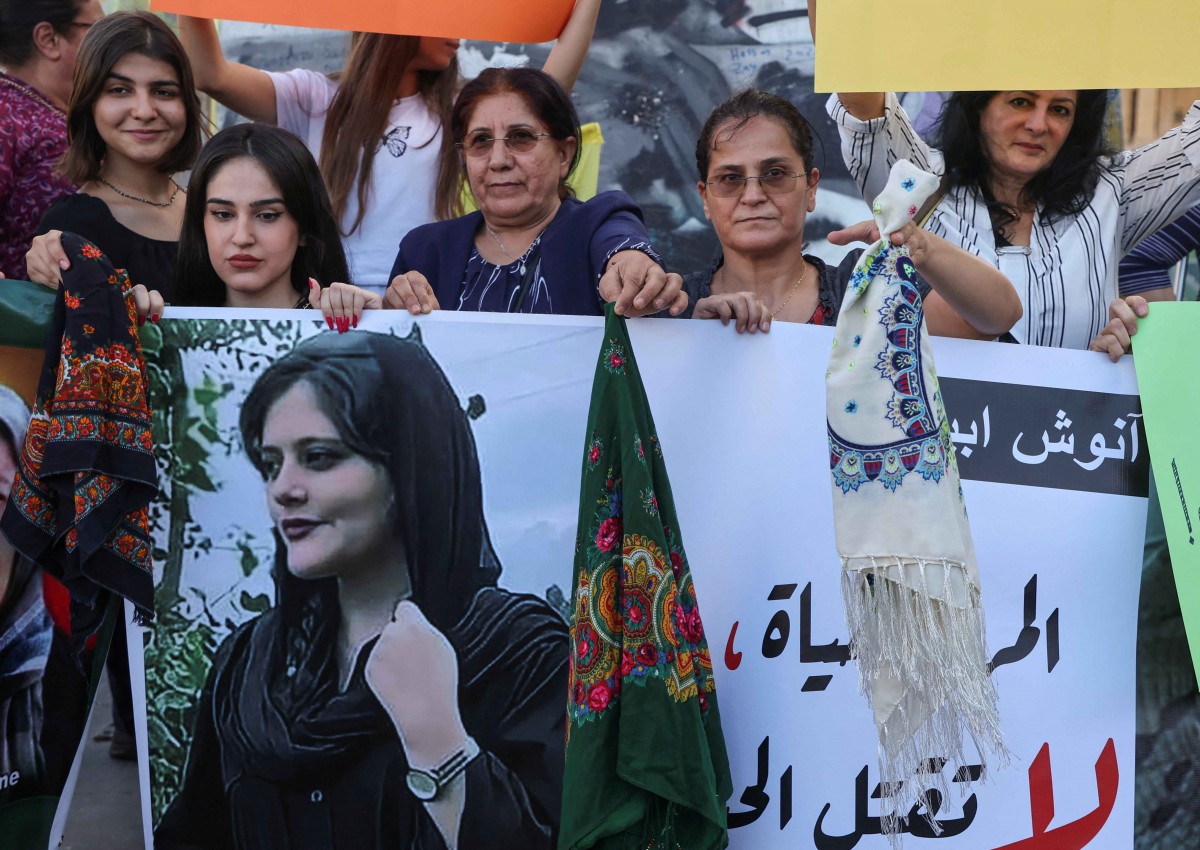 Women hold a picture of Mahsa Amini during a sit-in following her death, at Martyrs’ Square in Beirut, Lebanon September 21, 2022. Photo: Reuters/Mohamed Azakir

WhatsApp users said they could only send text, not pictures, while Hengaw said access to the internet had been cut in Kurdistan province – moves that would hinder videos being shared from a region where the authorities have previously suppressed unrest by the Kurdish minority.

Meta Platforms, the owner of Instagram and WhatsApp, did not immediately respond to a request for comment.

Amini’s death unleashed anger over issues including freedoms in the Islamic Republic and an economy reeling from sanctions. Women have played a prominent role in the protests, waving and burning their veils, with some cutting their hair in public.

Amini fell into a coma while held by the morality police, who enforce strict rules in Iran requiring women to cover their hair and wear loose-fitting clothes in public. Her funeral was on Saturday.

Her father said she had no health problems and that she suffered bruises to her legs in custody. He holds the police responsible for her death. The police have denied harming her.

A top aide to Supreme Leader Ayatollah Ali Khamenei paid condolences to Amini’s family this week, promising to follow up on the case and saying Khamenei was pained by her death.

Activists said they feared an escalating crackdown. “We are worried that the world will forget about Iran as soon as the regime shuts down the internet – which is already happening,” one activist told Reuters.

Fars news agency, close to the elite Revolutionary Guards, carried videos accusing protesters of torching a mosque, an Islamic shrine and buses, attacking a bank and pulling off a woman’s veil.

Such accusations against dissidents have preceded violent crackdowns after protests dating back to unrest in 2009.

“We are getting warnings from the security organisations to end the protests or face jail,” an activist in the northwestern Kurdistan province said.

Fars said on Wednesday a member of the Basij, a militia under the umbrella of the Revolutionary Guards, was killed in the northwestern city of Tabriz, while the official IRNA news agency said a “police assistant” died from injuries on Tuesday in the southern city of Shiraz.

This is Iran today. A woman proudly burning the most visible symbol of religious dictatorship; compulsory hijab.
Hijab police killed #MahsaAmini but now there are millions of Mahsa in Iran who are shouting NO to Forced hijab NO to gender apartheid regime.#مهسا_امینی pic.twitter.com/9tzd9IRwgB

A prosecutor in Kermanshah said two people had been killed on Tuesday in riots, blaming armed dissidents because the victims were killed by weapons not used by police. Meanwhile, the Kurdistan police chief confirmed four deaths earlier this week in the province, blaming “gangs” for their deaths.

Hengaw said 450 people had been injured in addition to the 10 protesters it said had died in protests mainly in the northwest. Reuters could not independently confirm the casualty reports.

One showed a man scaling the facade of the town hall in the northern city of Sari and tearing down an image of Ayatollah Ruhollah Khomeini, who founded the Islamic Republic after the 1979 revolution.

On Wednesday in Tehran, hundreds shouted “death to the dictator” at Tehran University, a video shared by 1500tasvir showed. Reuters could not verify the video’s authenticity.