India voted in favour of the latest EU-sponsored resolution, although it usually abstains or votes against country-specific resolutions. China, Russia and Pakistan have all opposed it. 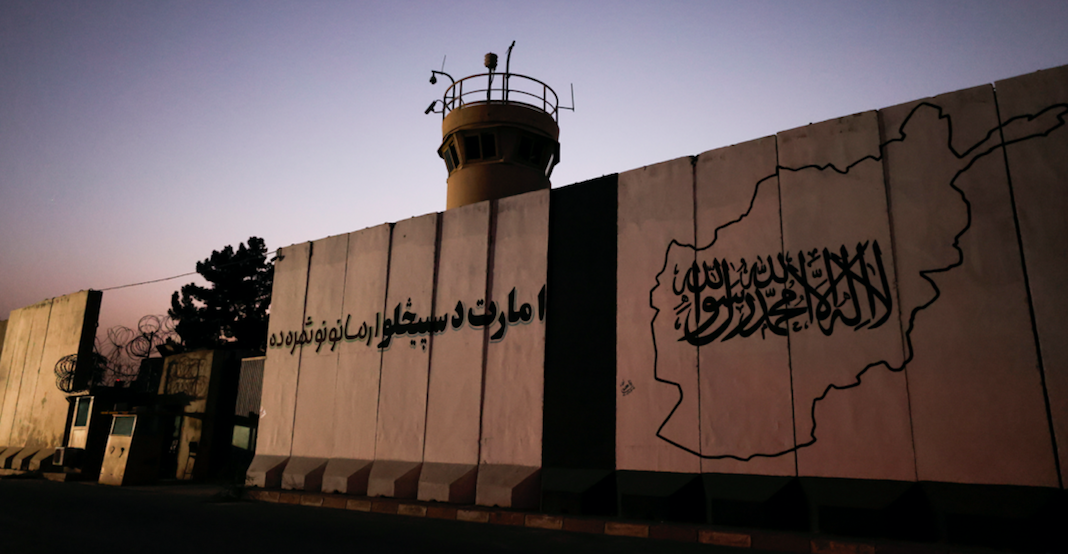 An Afghan map with the Taliban flag an graffiti reading: 'The Emirate is the achievement of sacred ideals' is seen on the concrete walls of the abandoned U.S. embassy in Kabul, Afghanistan October 5, 2021. Photo: Reuters/Jorge Silva

New Delhi: In its second attempt in two months, the United Nations Human Rights Council approved a monitoring mandate for Afghanistan through a resolution which was voted in favour of by India and the European Union states but opposed by China, Pakistan and Russia.

The resolution (A/HRC/48/L.24/Rev.1) passed on Thursday, October 8, with 28 votes in favour, 14 abstentions and five negative votes, has been approved only a month after the Council had unanimously adopted an Organisation of Islamic Cooperation-sponsored resolution at the special session on Afghanistan.

The previous resolution, drafted and steered by Pakistan, had been severely criticised by several countries, UNHRC officials and human rights activists for being deliberately diluted and not having any oversight mechanism. The special session had taken less than two weeks to convene after the Taliban’s complete victory in Afghanistan, following the withdrawal of foreign troops and the sudden departure of President Ashraf Ghani.

India voted in favour of the latest EU-sponsored resolution on Afghanistan, although it usually abstains or votes against country-specific resolutions.

Earlier in the day, India had voted against the resolution to extend the war crimes investigation by UNHRC in Yemen. It was the first time that a UNHRC resolution had been defeated in the 15-year-old history of the UN body.

There were no explanations given for India’s vote on the resolutions on Yemen and Afghanistan. But generally, India’s stance has been not to support resolutions that are not backed by the country concerned.

The resolution on Afghanistan had been co-sponsored by European Union and the recognised Afghan representative for the UN in Geneva. The Afghanistan permanent mission continues to be manned by diplomats appointed by the previous Ashraf Ghani government, as UN member states have decided to defer any decision to recognise the Taliban regime.

Under the latest resolution, Council has appointed a Special Rapporteur to monitor the situation of human rights in Afghanistan and present a written report to the UNHRC and UN General Assembly in the latter half of 2022.

Further, the resolution “encourages” the UN human rights chief Michele Bachelet to update the Council “as deemed necessary, and in any case” before the end of 2021. It was in addition to the oral update to be presented in the Council’s fiftieth session next year.

The five negative votes on the resolution were cast by China, Russia, Pakistan, Venezuela and Eritrea.

China, Russia and Pakistan took the floor to express their disappointment that the adoption of the resolution which they said would be unhelpful towards normalising the situation in Afghanistan.

The three countries together have been pushing for greater engagement with the Taliban regime in the face of the West’s reluctance to accord recognition to the new dispensation.

The Human Rights Council is yet another multilateral platform to demonstrate the international community’s deep divide over the steps and timing to recognise or integrate the Taliban regime into the global system.

Pakistan termed the resolution as “ill-timed, ill-advised and potentially counter-productive”. Russia and other partners also criticised that the Special Rapporteur had a “forward-looking mandate” and did not cover atrocities committed by foreign troops. They questioned the timing of the resolution when the earlier one was approved just a month ago and was yet to be implemented.

Out of the 14 abstentions, 11 were by members of OIC, which had sponsored the resolution adopted during the special session in August. None of the OIC members of the Council, except Pakistan, voted against the resolution.

Afghanistan’s representative had also sponsored the OIC-led resolution but had expressed disappointment that it did not set up any monitoring mechanism.

Welcoming the EU-drafted resolution, Afghan representative Nasir Ahmad Andisha said that “initial optimism” of the Taliban regime’s responsiveness to international concerns had waned after the formation of the caretaker government. He highlighted the human rights violations reported from inside Afghanistan and stated that these were the “actions” of the Taliban, who had told their international interlocutors that they would respect the rights of all Afghans.

Welcoming the appointment of a special rapporteur, international human rights watchdog Amnesty International said that while the resolution fell short of addressing the gravity of the ground situation, it was an important first step towards an oversight mechanism.

“With the speed at which the situation on the ground is developing, it’s imperative that a mandate holder is appointed as urgently as possible and provided, in a timely manner, with all necessary resources to conduct their work,” said Amnesty International secretary-general, Agnès Callamard.