The emergency airlift plans underscore the interconnected nature of global supply chains and the continued dependence on China for key goods even as some manufacturers. 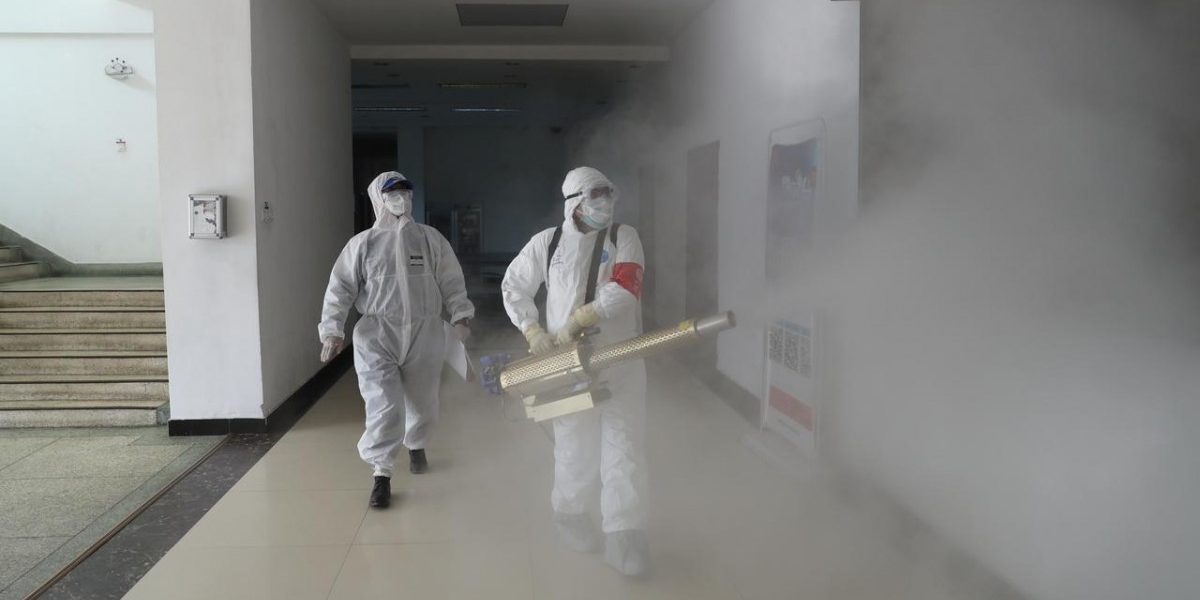 Volunteers in protective suits disinfect a residential compound in Wuhan, the epicentre of the novel coronavirus outbreak, in Hubei province, February 22, 2020. Photo: China Daily via Reuters

New Delhi: India is planning to backstop its growing electronics sector by arranging to airlift components from China, three government officials said, as it tries to contain the fallout from the coronavirus crisis in China.

India’s federal technology ministry has asked electronics and smartphone industry lobby groups to draw up a list of components made in China which then can be airlifted, two of the officials said. China is slowly getting back to work after an extended shutdown, but it is still grappling with a range of production and logistics delays.

Electronics manufacturing, especially the assembly of smartphones, is a bright spot for India’s otherwise flagging economy. But the country is still highly dependent on China for components such as camera modules and display screens.

The emergency airlift plans underscore the interconnected nature of global supply chains and the continued dependence on China for key goods even as some manufacturers – prompted in some cases by the US-China trade war – move to build up capacity outside of China.

The Automotive Component Manufacturers Association of India has reached out to its members to assess which parts are in short supply and can potentially be air-lifted, according to a source aware of the matter. India’s auto industry relies heavily on China for parts such as electronic components, pressure sensors and fuel injectors.

India’s embassy in China is also helping coordinate an airlift of drug ingredients from China, said a government adviser with direct knowledge of the matter.

For the electronics and smartphone components, the technology ministry “is in touch with aviation carriers and air freighters and they’ve been connected with the industry,” one of the government sources said.

The airlifting of components from the Chinese cities of Guangzhou and Shanghai is one option being discussed, the official said.

The sources did not say when the airlifting might begin. The aviation ministry did not immediately respond a request for comment.

Lack of truck drivers, a proliferation of road checkpoints and a shortage of workers at Chinese ports have slowed shipments even for parts that are still being produced, Reuters has reported. Air cargo firms have also reduced services in response to crew health concerns and uncertain demand.

Smartphone makers in India thus far have largely weathered the virus crisis, partly because they had built up inventories of Chinese-made parts to cover the Lunar New Year holiday period when China’s factories close down.

But those stocks could dry up soon. S.N. Rai, the co-founder of homegrown smartphone maker Lava, said the supply of some components had resumed, but the pace of production at his factory on the outskirts of New Delhi could soon slow down.

“The period between March 10 and March 20 is going to be very tough,” Rai told Reuters. “In the absence of supplies, we might have to cut one or two of the three eight-hour shifts we have daily.”

Others are scrambling for components too.

The India units of contract manufacturers Wistron Corp, which makes some of Apple Inc’s lower-priced iPhones, and Flex Ltd have, through an industry body, asked for government help in securing components including camera modules and displays from China, according to two industry sources.

Wistron and Flex did not immediately respond to Reuters’ requests for comment.

Chinese smartphone makers Oppo and Korea’s Samsung Electronics did not respond to requests seeking comment on their supply chains.