A year after a devastating earthquake in Nepal, survivors struggling with debt are starting to consider other means such as organ trade and trafficking. 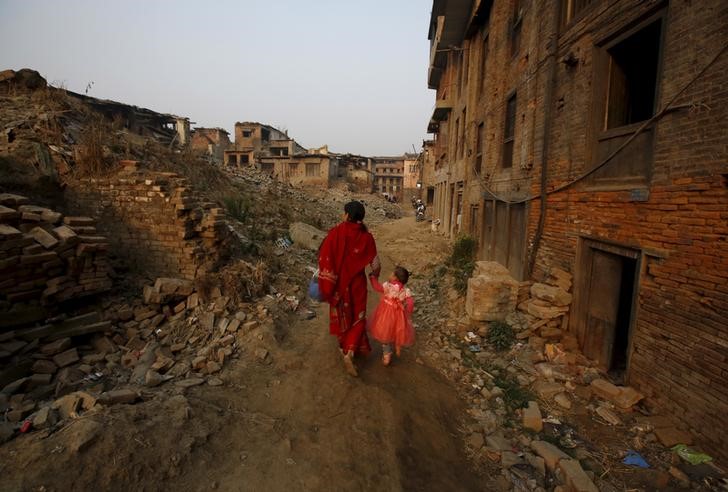 A woman and a child walk past the remains of collapsed houses damaged during the April 2015 earthquake, in Bhaktapur, Nepal March 18, 2016. Credits: REUTERS/Navesh Chitrakar/Files

Kathmandu: Hundreds of Nepalis who had borrowed money to rebuild their lives after two earthquakes left them homeless are at risk of being trafficked or duped into selling their kidneys to pay off their debts, an international development organisation said.

Nepal received $4.1 billion in pledges from donors for reconstruction after quakes last April and May killed 9,000 people, injured at least 22,000 and damaged or destroyed more than 900,000 houses in the Himalayan nation.

More than a year on, reconstruction has been slow with unrest over a new constitution adding to the delays. Unable to find work, hundreds of Nepalis are deep in debt, the Asia Foundation said on Tuesday.

“Their desperation makes them take greater risks, such as sending their children away for what they think are better lives, or even selling their kidneys,” she told the Thomson Reuters Foundation in an interview.

“We’re going to see an uptick in people moving out to earn money as their debts become due. Some of them will be trafficked,” Baruah added.

Nepal‘s economy is highly dependent on remittances sent back by its migrant workers, which make up about 30% of its GDP.

Following the earthquakes, hundreds of migrant workers returned to Nepal to help their families.

Many are likely to have paid their employers to be allowed to return home, going without wages for several months while spending money on rebuilding, Baruah said.

“The quakes exacerbated their indebtedness,” she said.

Activists say there are signs of an increase in the number of Nepali women and children being trafficked after last year’s disaster.

Anti-trafficking charity Maiti Nepal said it stopped 745 women and children – suspected victims of human trafficking – at the Nepal-India border in the three months following the earthquakes.

That compares with 615 such interceptions in the three months before the quakes, their data showed.

Nepal is both a source and a destination country for victims of human trafficking with some 8,500 Nepalis trafficked every year, according to the country’s human rights commission.

Some victims are duped into selling their kidneys and brought to India, where a chronic organ shortage has fuelled a black-market trade in illegal transplants, activists say.

Nepal‘s economy is forecast by the Asian Development Bank to have grown only about 1.5% in the fiscal year to mid-July after reconstruction delays and trade disruptions. A recovery is dependent on the pace of reconstruction, it said.

“Those who have taken on debt don’t have options,” she said.