The rivals spoke in simultaneous town halls broadcast on separate television networks after a debate originally scheduled for Thursday was called off following Trump's COVID-19 diagnosis.

Miami/Philadelphia: Democratic presidential candidate Joe Biden on Thursday criticised what he called President DonaldTrump‘s “panicked” response to the coronavirus pandemic, while Trump defended his handling of a crisis that has killed more than 216,000 Americans.

The rivals spoke in simultaneous town halls broadcast on separate television networks after a debate originally scheduled for Thursday was called off following Trump‘s COVID-19 diagnosis.

The split–screen showdown offered a stark reminder of the many ways the campaign season has been changed by a pandemic that has prompted more than 18 million people to cast ballots more than two weeks before Election Day on November 3, 2020.

Biden, speaking to voters in Philadelphia on ABC, blamed the Republican president for concealing the deadliness of the virus.

“He said he didn’t tell anybody because he was afraid Americans would panic,” Biden said. “Americans don’t panic. He panicked.”

Trump defended both his response to the pandemic as well as his own personal conduct, including staging a Rose Garden event at the White House where few wore masks or practised social distancing, which resulted in numerous attendees contracting the disease.

“Hey, I’m president – I have to see people, I can’t be in a basement,” Trump said on NBC in front of an outdoor audience of voters in Miami, implicitly criticising Biden for spending months off the campaign trail as the pandemic raged.

He did not answer questions about the last time he tested negative before contracting the virus, saying he did not recall precisely. 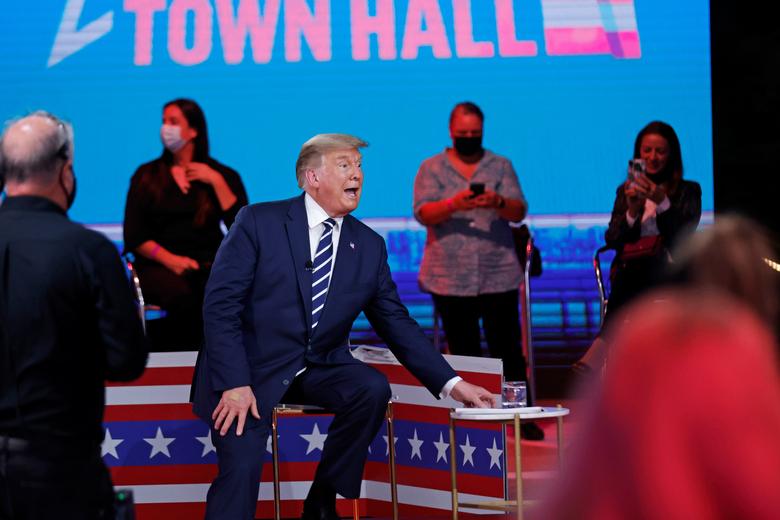 He said he “heard different stories” about the efficacy of masks, even though his own administration’s public health experts have said wearing them is key to stopping the spread of the virus.

The president declined to denounce QAnon, the false conspiracy theory that Democrats are part of a global paedophile ring, first praising its adherents for opposing paedophilia before saying he knew nothing about the movement.

Trump also dodged questions about a New York Times investigation of two decades of his tax returns, which he has refused to release publicly despite decades of precedent for presidential candidates.

He appeared to confirm the paper’s report that he has some $400 million in personally guaranteed loans, arguing that the amount was a “peanut” compared with his worth. He also did not deny the Times’ report that he paid only $750 in federal income tax during his first year in the White House, although he said at one point the paper’s numbers were “wrong.”

The second presidential debate had originally been scheduled for Thursday, but Trump pulled out of the event after organizers decided to turn it into a virtual affair following his diagnosis two weeks ago. A final debate is still scheduled for October 22, 2020, in Nashville, Tennessee.

Trump, who spent three days in a military hospital but has since returned to the campaign trail, is trying to alter the dynamics of the race. Reuters/Ipsos polls show Biden has a significant national lead, although his advantage in battleground states is less pronounced.

North Carolina, a highly competitive state, saw huge lines as it began more than two weeks of in-person early voting on Thursday, following record turnout in Georgia and Texas earlier in the week.

Some 18.3 million Americans have voted either in person or by mail so far, representing 12.9% of the total votes counted in the 2016 general election, according to the U.S. Elections Project at the University of Florida.

Voters are seeking to avoid in-person lines on Election Day to stay safe as coronavirus infections and hospitalizations continue to rise, but also to make sure their ballots will count. Many are concerned that Trump will challenge widely used mail-in ballots, after his repeated claims without evidence that they were fraudulent.

The Senate confirmation hearings for Amy Coney Barrett, Trump‘s nominee for a vacant Supreme Court seat, prompted careful answers from both candidates. Republicans have pushed to seat Barrett before the election after refusing to do so for former Democratic President Barack Obama’s nominee in 2016, saying it was inappropriate in an election year.

Biden said he was not a “fan” of court-packing, the idea promoted by some Democrats of adding justices to countermand what they view as a stolen seat. But he declined to rule it out after moderator George Stephanopoulos pressed him, saying: “It depends on how this turns out.” 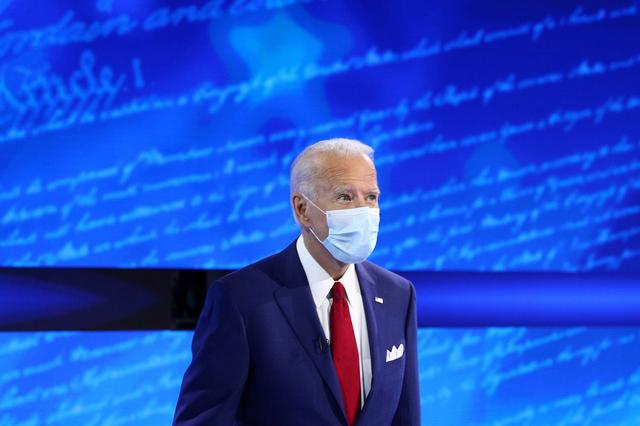 Trump would not say whether he would like to see abortion rights invalidated, an outcome that many legal scholars believe is more likely with the conservative Barrett on the court.

“I think that she’s going to make a great decision,” he said. “I did not tell her what decision to make.”

In a sign of Democratic determination to defeat Trump, a massive amount of money has poured into the party’s coffers in recent months.

Democratic fundraising organisation Act Blue said on Thursday it collected $1.5 billion online from July to September, the most it had ever raised in one quarter. By comparison, major Republican fundraising platform WinRed said on Monday that it collected $623.5 million in the same period.

Biden‘s campaign collected $383 million in September, setting a new record for a US campaign for the second consecutive month. The Trump campaign has not released its monthly figures.

Both candidates have been visiting battleground states this week, with Trump holding rallies in Florida, Pennsylvania and Iowa and Bidentraveling to Ohio and Florida.