In Iraq, a Destroyed State Struggles to Cope With Coronavirus

Since the 2003 war, a massive 70% of the country’s health care infrastructure has been destroyed. As hospitals are besieged by victims of the pandemic, a state enfeebled by two decades of conflict is again at a breaking point. 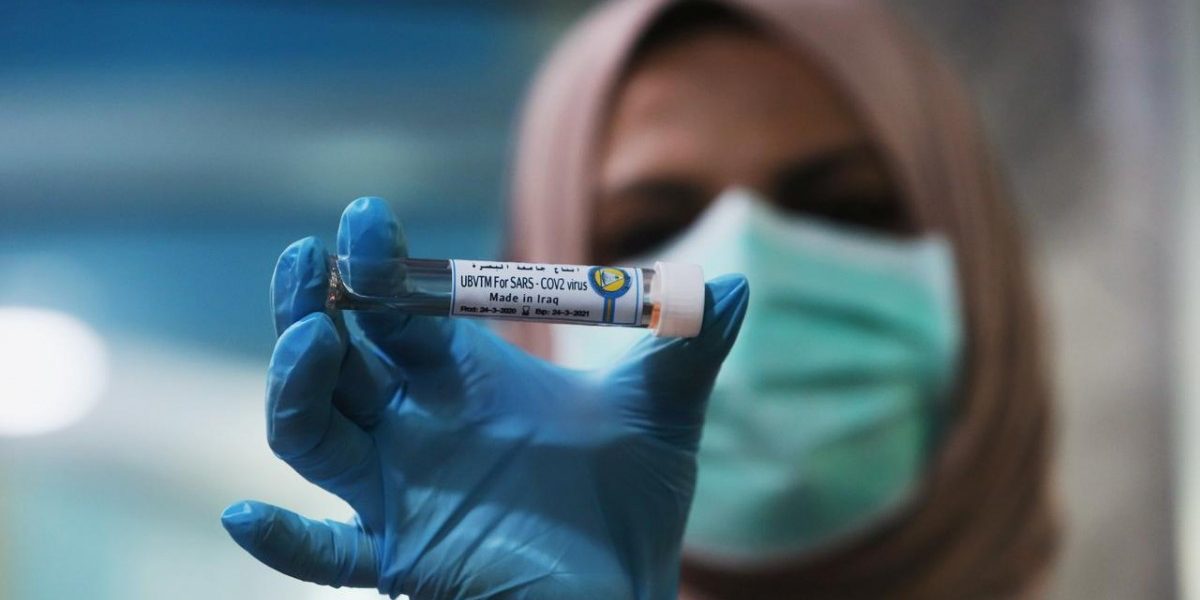 An Iraqi doctor shows a locally made testing component for the coronavirus disease, as it's produced by a group of researchers from Basra University, in Basra, March 29, 2020. Photo: Reuters/Essam Al-Sudani

Even before COVID-19 became the main concern for the region, the Middle East was already traversed by multiple political, economic, and social crises — some of them structural rather than merely temporary or fleeting.

Nearly a hundred thousand (mostly American) foreign soldiers are stationed in the region. The state of Israel — meticulously destroying any possibility of a future Palestinian state — is no longer hesitating from military intervention in Lebanon, Syria, and Iraq.

Millions of people, forced to flee wars, are now living in refugee camps. Interconfessional fractures widen, and authoritarian regimes continue to rule, as if according to some inexorable destiny. Non-state groups attempt to convert their military gains into formal political power.

These dynamics are particularly evident in Iraq. There, the American-led invasion in 2003 saw the conscious destruction of the state — using the pretext of “de-Baathification” — under the orders of proconsul Paul Bremer and the creation of a constitution by which citizens and the state are connected by nothing more than religious affiliation. The American occupation provoked a yearslong civil war and handed power to an elite that has siphoned off billions of dollars.It is in this context that the coronavirus pandemic has appeared — in a country and region exhausted by wars, with almost nonexistent public institutions and swathes of the population destitute.

Indeed, the current health crisis was declared just at the moment that Iraq was going through one of the gravest episodes since the beginning of the occupation.The period after the war with the Islamic State (2014–17; IS) has been marked by intra-Shia tensions, rising noticeably prior to the May 2018 legislative elections.

On the one side was the Popular Mobilization Forces (PMF) — a collection of armed factions, raised either to fight the American occupation, or following IS’s capture of Mosul in June 2014 — and on the other, Muqtada al-Sadr’s Sairun (“Forward”) coalition. Muqtada is the son of Mohammad Sadiq al-Sadr, the Shia leader executed by Saddam Hussein in 1999, and considered the legitimate spokesperson of the poorest sections of the Shia working class, with a strong base in Sadr City, the vast Baghdad district, and the wider Iraqi south.

The Sairun coalition, led by al-Sadr’s forces and the Iraqi Communist Party, was the main winner of the 2018 election. However, in the postelection period the various groups squabbled over the distribution of state resources, and it was only after six months of argument over who ought to be prime minister — through a summer when the south revolted against unemployment, poverty, and the lack of services (especially electricity) — that a government finally appeared, in October that year.

Also read: The Roots of Iraqi Discontent and How to Remedy It

If this government’s formation was followed by a relative calm, this proved short-lived. Faced with the inability of the new cabinet, led by Adel Abdel-Mahdi, to initiate real reforms, the demonstrations began again in the summer of 2019, spreading across the south of the country before reaching Baghdad in October.

The repression was ferocious: more than six hundred were killed. Abdel-Mahdi was forced to resign when Sairun, part of the coalition government, took part in the protests — while factions of the PMF were accused of taking part in the repression. Iraq seemed as if it was again falling into a new intra-Shia confrontation.

Since then candidates for prime minister have failed one after the other to form a new government, with the absence of an executive all but paralysing the Iraqi state. The current PM, Mustafa al-Kazemi, is only the last to attempt to build a consensual cabinet and is facing strong opposition from the old guard. To date, no compromise has been found.

At the same time, the Trump administration adopted a more aggressive strategy in Iraq, as relations between the United States and Iran grew ever more tense, with both American and Israeli attacks increasing against the Tehran-aligned Popular Mobilization Forces. The point of no return was reached on January 3 this year, when American bombs killed Qassim Soleimani, commander of the al-Quds Force, and Abu Mahdi al-Mohandis, the PMF’s second-in-command, seen as the “hero of the victory against Daesh [IS]” by many Iraqis.

The killing of al-Mohandis in particular was viewed, by Iraqis from across the political spectrum, as a serious attack against the country’s sovereignty. On January 5 the Iraqi parliament passed a resolution calling for the end of foreign troops’ presence in the country, as millions of people took to the streets to denounce the assassination of both Soleimani and al-Mohandis. Muqtada al-Sadr commanded his partisans to leave the anti-government protests and join the funeral processions and, for his part, demanded the retreat of American troops from Iraq. Threatened, President Trump said:

If they do ask us to leave, if we don’t do it on a very friendly basis. We will charge them sanctions like they’ve never seen before ever. It’ll make Iranian sanctions look somewhat tame.

In mid-January, Washington went so far as to threaten to restrict Iraq’s access to its own bank reserves, held in New York — the ultimate symbol of Baghdad’s subordination.

It is in this context that the coronavirus epidemic was declared at the end of February. The minister of health demanded $5 billion immediately and a further $150 billion to buy testing and other medical equipment. But the government hasn’t been able to fully respond, since a new budget has not yet been voted through by parliament.

Confinement measures have worsened the economic crisis and Iraq’s dependence on oil — 85% of the state budget comes from petrochemical revenues — meaning that “Iraq has lost half of its financial revenues” over the last period, as one government official has explained. 1,928 people in Iraq have been infected (as compared to 717 in Lebanon and 501 in Palestine; we don’t have reliable statistics for Syria and Yemen). If this number seems small in comparison with the hecatomb of the West, the catastrophe may be no less severe, given the state of health services.

In Lebanon — where borders are closed, a national curfew has been imposed between 7 PM and 6 AM each day, and exceptional state powers declared — there have already been hunger protests in the banlieues of Beirut and other cities across the country. Only several weeks into the crisis did the prime minister promise checks of €300 and food parcels for each family.

The situation is not much better in Iraq, where anger is rising. On March 6 the outgoing government ordered the total closure of public places (commercial areas, parks, cafes, and restaurants), as well as schools and universities. Ministries have cut their activity by half, except health and security. On March 16 the government began a curfew; the next day flights into Iraq were suspended, as were movements between regions.

As the number of sick reached almost two thousand, Reuters published an article claiming the numbers are higher. However, respect for confinement measures was late coming, even. Thousands of pilgrims took part in the commemoration of the death of Imam Musa al-Kadhim in Baghdad on March 21. The security forces can only attempt to impose quarantine measures, even when all the shrines have been closed, and the religious authorities have demanded that citizens abide by the new rules.

The state is counting on these measures to control the epidemic, knowing that the country’s health infrastructure would not otherwise hold.

Indeed, it is already in dire conditions. The health sector gets only 2.5% of the national budget. The successive wars have ruined what was, in the 1990s, one of the most developed health care systems in the region. According to a UNICEF report, 97% of the urban and 71% of the rural population had access to medical care in 1990, thanks to a well-established medical profession, and the fact that care itself was free of charge. But according to the UN, around 20,000 Iraqi doctors have left the country since 2003. 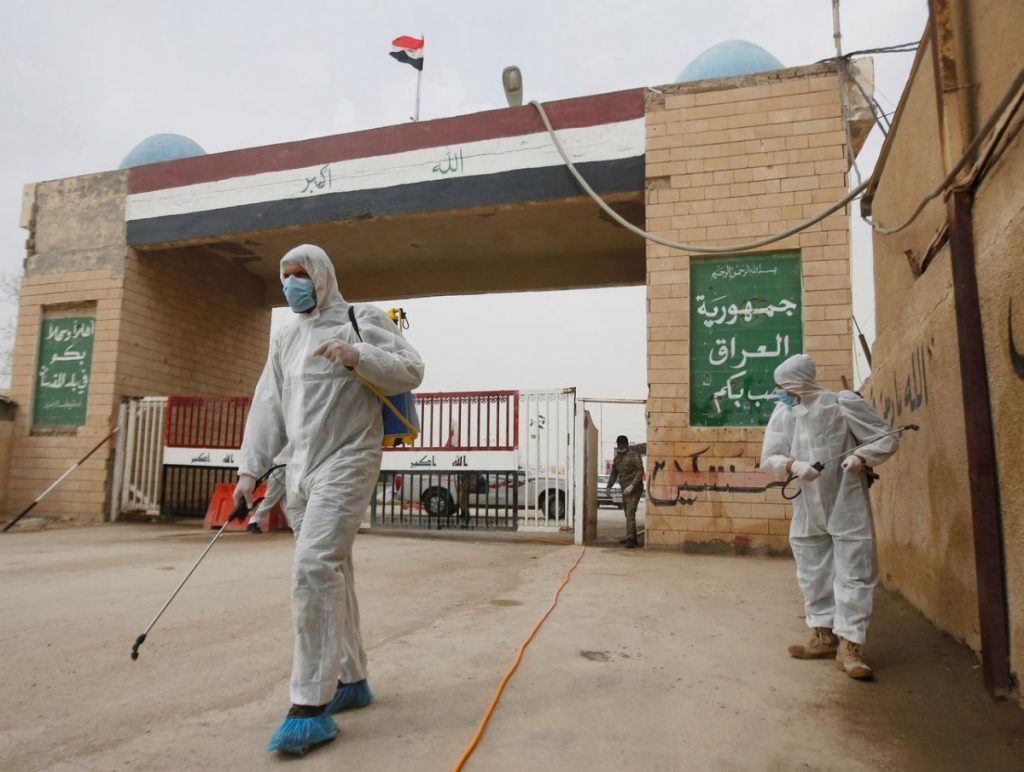 Workers in protective suits spray disinfectants near the gate of Shalamcha Border Crossing, after Iraq shut a border crossing to travellers between Iraq and Iran, March 8, 2020. Photo: Reuters/Essam al-Sudani

As the second-biggest exporter of oil in the world, the state today is not able to enact general testing. In Mosul, the country’s second-biggest city, nine of the thirteen hospitals on which the city depended were destroyed during the war against IS. The larger part of the city does not have access to water or basic services. According to Médecins Sans Frontières, there are not even 1,000 beds per 1.8 million people, with 70% of all medical facilities destroyed. In Sadr City, there are just four hospitals for 3.5 million inhabitants and a chronic lack of medical staff.

The country’s economic crisis brought many thousands of protesters onto the streets through late 2019; the health crisis will only exacerbate the population’s precarious living conditions.

According to the UN, 4 million Iraqi survive thanks to international aid which, since the crisis is global, may itself plummet. There are still 1.4 million displaced people in the country, 200,000 of whom are living in camps.

“Here, there are two choices,” one Iraqi doctor told a Lebanese daily. “You can risk going out and contracting the virus and maybe surviving; or you can die at home, of hunger or malnutrition.” Such is the dilemma that the people of Iraq are now posed with.

In Iraq as across the Middle East, the COVID-19 pandemic is unfolding in a context of multiple profound crises.

Even if the people of the region can find precious support among their families and communities, these are no substitutes for the state, solely capable of taking the needed measures at the needed scale. Yet the colonial and imperial wars beginning in the last century — and continuing today — have resulted in its decomposition, in Iraq as elsewhere.

Hence, even if the social and economic consequences of the virus are not yet quantifiable, they will, without a doubt, only worsen an already unbearable situation.

Hajar Alem is a journalist based in Beirut.