In America, Domestic Extremists Are a Bigger Risk Than Foreign Terrorism

Groups survive in the long term when that description makes sense to enough of the population to buy them tolerance and safe space to operate, plan and grow. 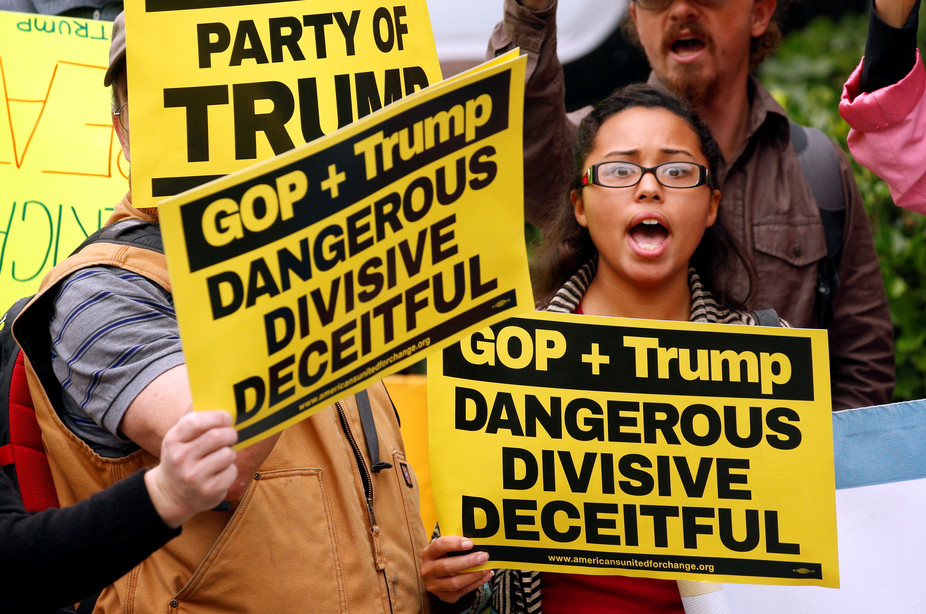 Protesters shout outside the Republican National Committee on Capitol Hill in Washington, May 12, 2016. Credit: Reuters/Kevin Lamarque

Groups survive in the long term when that description makes sense to enough of the population to buy them tolerance and safe space to operate, plan and grow. Protesters shout outside the Republican National Committee on Capitol Hill in Washington, May 12, 2016. Credit: Reuters/Kevin Lamarque

Take America back from those who have stolen it.
Protect America from those who want to destroy it.
Restore the principles that these usurpers betrayed.

These are the messages that have defined the GOP presidential race. They have been used for the past eight years to justify obstruction of the Obama administration and are now being used to paint the democratic candidates as dangerous. In the late stages of the GOP primary as the rhetoric became increasingly xenophobic, they were applied to increasingly broad swaths of the American population as well.

Years of constant repetition by members of the GOP have given them an appearance of legitimacy, now strengthened by Donald Trump’s victory in the GOP primary contest and the party’s growing embrace of him as their standard-bearer.

Unfortunately, the Republican Party isn’t alone in using these messages.

Right-wing extremist groups use them as well, and to very specific ends: to define the conditions under which antigovernment violence becomes legitimate in their worldview.

I have spent nearly 15 years studying how the risk of violence grows within societies around the world, and running programs designed to stem the tide. I have seen rhetoric like this used to mobilise violence in countries like Iraq and Kenya.

This same dynamic, I argue, is taking shape within American society now. If it continues, it represents a greater threat than anything we face from terrorist groups outside our own borders.

The GOP has spent many years mobilising both (sometimes tacitly and sometimes actively), in the form of anti-Muslim, anti-immigrant, racist and antigovernment sentiment. This strategy has secured them votes from the white, Christian, male and ideologically extreme demographic needed to offset the party’s growing distance from an increasingly diverse and progressive American society.

This has typically been done in code, a practice that’s come to be known as “dog whistle politics” – but this election has brought it into the open.

Few have emerged unscathed. For months, Republican candidates traded shots claiming that each other, liberals, immigrants and Black Lives Matter protesters – to name a few – are to blame for the picture they’ve painted of a degraded America that’s fallen into hostile hands.

Even the GOP itself has fallen into the cross-hairs. The divide between party leadership and the population it claims to represent is growing, and becoming septic. Trump has built his candidacy on the idea that America is sick, broken and misled, and “making it great again” depends on taking it back and cutting out the cancer.

His campaign rhetoric has a common thread with that of extremists. It emphasises betrayal and theft. It tells Americans that things are bad because of it, and then points a finger and places blame.

Every violent group in history describes its own violence as the legitimate response to a threat that was forced on them. Groups survive in the long term when that description makes sense to enough of the population to buy them tolerance and safe space to operate, plan and grow. That’s true of terrorism and violent extremism – but because protesters and supporters alike view each other as enemies of the state and therefore legitimate targets, it also helps to explain the growing physical violence at Trump rallies. It should also provide a warning for what that as-yet-limited violence could grow into.

For examples, look at the websites of American extremist groups. Their reasoning usually orbits around the belief that they are defending the Constitution, stopping the theft of the political process from the people of the US and resisting takeover by hostile powers. As such, they don’t consider themselves extremist at all, but defenders against it. It’s the same language we saw in 2014 at the Bundy Ranch standoff, and again in 2015 at the Malheur occupation.

The names these groups take – “Patriot Movement,” “Freemen,” “Sovereign Citizens“ – serve to legitimise them in American eyes, drawing on the narrative that true Americans are not only able – but expected – to throw off oppression themselves. Typically, each group insists it’s not violent – unless pushed, and then of course it stands ready to respond in kind.

Here, of course, is the rub. The constantly repeated themes of theft and betrayal from the GOP suggest to the patriot militias and to supporters who feel angry and alienated that the push has already happened. Trump has on many occasions claimed that America is “lost” to the American people. Given his hostility against immigrants and Black Lives Matter protesters and short-lived nomination of a white nationalist as a delegate in California, it seems clear he means white Americans. The “birther” argument, which Trump supported and other GOP officials failed to reject, at its heart is an argument that President Obama is the foreign agent that the patriot movement feared. Ted Cruz often repeated this idea that the nation is under threat of destruction and that the Obama government is law-breaking and unconstitutional.

We’ve seen the message from across the GOP that Hillary Clinton is in thrall of elite interests that stand opposed to those of everyday Americans. As for Sanders’ self-embraced “socialist” label, it has stood in for alien since before the Cold War.

Recent years and the 2016 race aren’t the first time we’ve heard this kind of language from Americans within the patriot movement.

The following words were spoken by Timothy McVeigh, in an interview explaining why he destroyed the Murrah Building in Oklahoma City.

Those who betray or subvert the Constitution are guilty of sedition and/or treason, are domestic enemies and should and will be punished accordingly. It also stands to reason that anyone who sympathises with the enemy or gives aid or comfort to said enemy is likewise guilty. I have sworn to uphold and defend the Constitution against all enemies, foreign and domestic, and I will.

David Lane, white supremacist, founder of The Order and convicted murderer, phrased the rationale for his violence thus:

cover-ups in the Kennedy assassination and the Vietnam affair made it apparent that powers alien to America’s claimed role were running things.

We could rewrite Lane’s and McVeigh’s words alike using Trump’s birther argument or Ted Cruz’s accusation of elites without significantly changing the meaning. Indeed, although the US remains fixed on foreign groups such as ISIS and al-Qaida when it defines terrorism, domestic violence already poses an equal or even greater threat. The foreign groups can certainly kill, but they have no power to divide our society; that additional and deeper threat is only our own.

The threat from inside

Consider this: individual acts of violence linked to racism and extremist politics are on the increase. The Washington Post reported in February 2015 that the number of Muslims killed in hate crimes is, on average, five times higher post-9/11 than before the attacks. Politics is increasingly divisive, and anger is the defining characteristic of American society.

The blame for these rifts and the likely consequences neither begin nor end with Donald Trump. He simply used an existing trend for his own gain. His praise of violence and embrace of racism and political extremism, however, goes past even what the GOP has already made commonplace.

In an age defined by the fear of terrorism, “taking America back from people who betrayed her security” has real power at the polls, as Trump can attest. But this strategy for winning elections isn’t just divisive. It’s creating a risk of violence that has already outgrown the threat it’s supposed to be a shield against.

Trump’s emergence as the GOP candidate has added fuel to the fire, especially while the GOP dithers over whether or not to embrace him and his message. Trump himself is unlikely to stop or be convinced of the effect he’s really having on American security. It’s left to the GOP to decide whether American security or winning an election is more important to them.