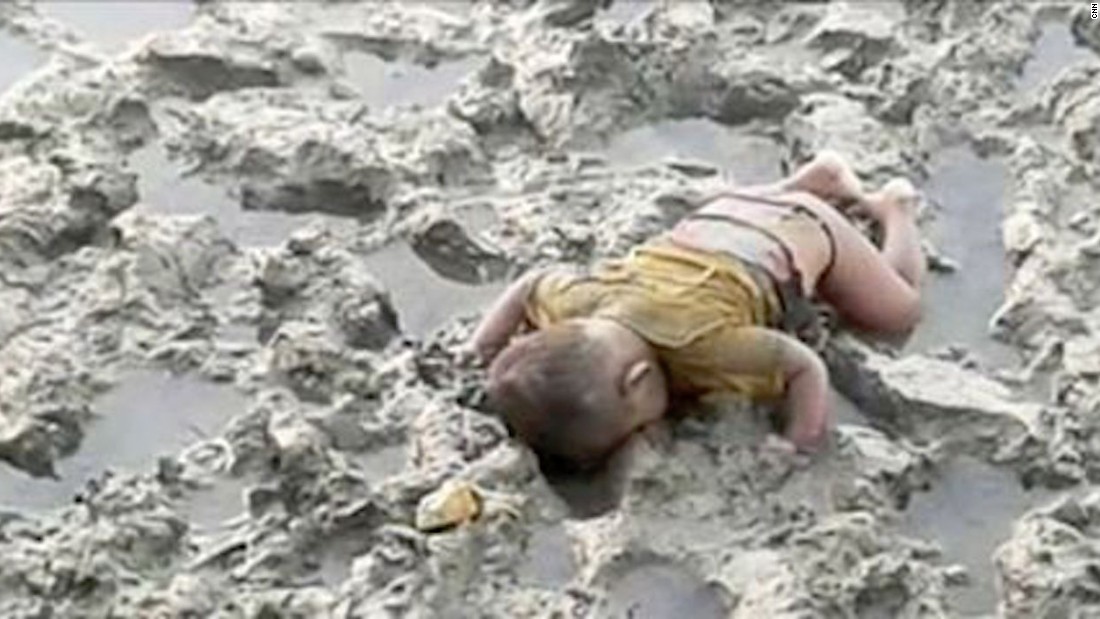 All of 16 months old, Mohammed Shohayet lies face down on a river bank, having drowned while trying to escape the persecution of Rohingyas in Myanmar’s Rakhine State by fleeing to Bangladesh. The photograph, released by CNN today, is shockingly reminiscent to one that shook the world last September when the body of Alan Kurdi washed up on a Turkish beach, the result of his family’s unsuccessful attempt to flee the civil war in Syria.

Mohammed, his mother and three-year-old brother all drowned when the boat they were trying to escape on sank due to overloading, reported CNN.

They are survived by Mohammed’s father, Zafor Alam who described the Myanmar government’s treatment of Rohingya Muslims in the country: “In our village, helicopters fired guns at us, and the Myanmar soldiers also opened fire on us.” He added, “We couldn’t stay in our house. We fled and went into hiding in the jungle.”

While CNN could not independently verify Alam’s account, citing heavily restricted access to northern Rakhine state, it did quote Aye Aye Soe, a Myanmar government spokesperson. Soe wrote to CNN confirming that soldiers had fired at a village on November 12 but explained the occurrence as a rescue mission to disperse an “armed mob of suspected perpetrators and collaborating villagers” who attacked the soldiers. She also denounced Alam’s testimony as “propaganda” and “false”, according to the same report.

Considered one of the most persecuted minority communities in the world, Rohingyas have come into the international spotlight in recent months due to human rights organisations voicing concerns over the government’s treatment of the community, with some even questioning whether the government’s actions amount to genocide.

Although they have been settled in Myanmar’s Rakhine State for generations, the state still considers them to be Bengali refugees.

Alam told CNN about the ordeal of escaping to Bangladesh, during which he got separated from the rest of his family as they tried to cross the Naf river which divides Myanmar and Bangladesh. He said, “I walked for six days. I couldn’t eat rice for four days. I could not sleep at all for six days,” he said. “We constantly changed our location as the military was searching for Rohingyas.”

Meanwhile, human rights groups dismissed the findings of an investigation panel that was set up to examine the government’s activities in Rakhine.

In Yangon, human rights groups said Myanmar’s government is trying to cover up abuses against civilians in a Muslim-majority part of Rakhine state after an investigation panel dismissed claims a government crackdown there amounts to “genocide”.

Troops have poured into northern Rakhine since insurgents believed to be from the mostly stateless Rohingya minority attacked border posts on October 9, killing nine police officers.

At least 86 people have died and an estimated 34,000 have fled across the border to Bangladesh.

Rohingya residents and refugees accuse security forces of summary executions, arbitrary arrest, rape and burning down homes as part of what the government has termed its “clearance operations” in search of attackers.

Myanmar’s government has flatly denied allegations that abuses have been committed, but has prevented independent journalists and aid workers from accessing parts of northern Rakhine.

Under international pressure Suu Kyi ordered the commission to investigate the attacks and the abuse allegations.

“The Bengali population residing in Maungtaw region, the increasing population of Mawlawi (Islamic scholars), mosques and religious edifices are proof that there were no cases of genocide and religious persecution in the region,” said the report.

Many in Myanmar refer to the Rohingya as “Bengalis” as they see them as interlopers from Bangladesh.

The panel also said it had so far found “insufficient evidence” for legal action on allegations of rape by soldiers.

Photo feature: In the Shadow of the Rohingyas of Myanmar

“No cases of malnutrition were found in the area, due to the area’s favourable fishing and farming conditions,” it added, despite concerns from international aid organisations that tens of thousands of people who were receiving food aid before October 9 are now cut off.

Phil Robertson, deputy Asia director at New York-based Human Rights Watch, said the panel was “looking more and more like the Myanmar government whitewash mechanism that we feared it would be,” highlighting that the panel chair vice president Myint Swe, is a former army lieutenant general.

Robertson said it was “astonishing” that the commission could conclude from the presence of mosques that the Rohingya are not being persecuted.

“Judging by what is written in this interim report, the commission has so far acted to discount out of hand what it calls ‘external allegations’ rather than seriously investigate them and risk uncovering the litany of rights violations against the Rohingya,” he said by email.

Matthew Smith, founder of campaign group Fortify Rights, said the commission’s report was sharply at odds with accounts collected by researchers interviewing civilians in northern Rakhine and those who have fled to Bangladesh.

“The army has committed atrocity crimes and this commission is attempting a whitewash. Ministries led by Suu Kyi have charted the path of denial, waging a shameful propaganda campaign,” Smith said by email.