Many of the restrictions are intended to draw legal challenges, which religious conservatives hope will lead the nation’s top court to overturn the 1973 Roe v. Wade decision that established a woman’s right to terminate her pregnancy. 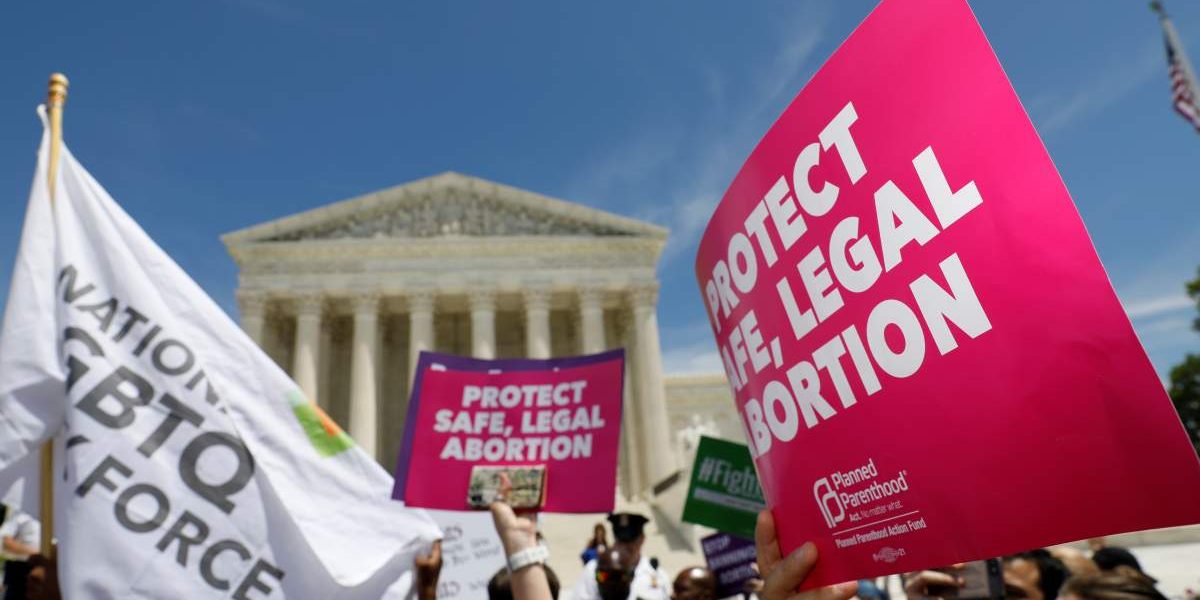 Abortion rights activists during a rally outside the U.S. Supreme Court in Washington, U.S., May 21, 2019. Credit: Reuters/Kevin Lamarque

Washington: Abortion-rights campaigners, including Democrats seeking their party’s 2020 presidential nomination, rallied at the US Supreme Court on Tuesday to protest new restrictions on abortion passed by Republican-dominated legislatures in eight states.

Many of the restrictions are intended to draw legal challenges, which religious conservatives hope will lead the nation’s top court to overturn the 1973 Roe v. Wade decision that established a woman’s right to terminate her pregnancy.

“We are not going to allow them to move our country backward,” US Senator Amy Klobuchar, one of the two dozen Democrats running for president, told the crowd through a megaphone.

Another candidate, Senator Cory Booker, urged the crowd to “wake up more men to join this fight.”

The rally is one of the scores scheduled for Tuesday around the country by the American Civil Liberties Union, NARAL Pro-Choice America, Planned Parenthood Action Fund and other abortion rights group. The protests are a response to laws passed recently by Republican state legislatures that amount to the tightest restrictions on abortion in the United States in decades.

Alabama passed an outright ban last week, including for pregnancies resulting from rape or incest, unless the woman’s life is in danger. Other states, including Ohio and Georgia, have banned abortions absent a medical emergency after six weeks of pregnancy or after the fetus’s heartbeat can be detected, which can occur before a woman even realizes she is pregnant.

Protesters outside the Supreme Court waved signs saying “We won’t be punished” and “Protect Safe, Legal Abortion” and were joined by Pete Buttigieg, the South Bend, Indiana, mayor who also is vying for the 2020 nomination. “My entire campaign is about freedom,” he said in a brief interview.

U.S. President Donald Trump, a Republican who opposes abortion, has seized on the issue as one likely to fire up his core supporters, although he considers the Alabama ban too restrictive because it does not make exceptions for incest and rape.

“This is the beginning of President Trump’s war on women,” she told the rally. “If he wants his war, he will have his war, and he will lose.”

The restrictive new laws are contrary to the Roe v. Wade ruling, which affords a woman the right to an abortion up to the moment the fetus would be viable outside the womb, which is usually placed at about seven months, or 28 weeks, but may occur earlier.

The bans have been championed by conservatives, many of them Christian, who say fetuses should have rights comparable to those of infants and view abortion as tantamount to murder. The Supreme Court now has a 5-4 conservative majority following two judicial appointments by Trump.

“This is probably one of the first times I’ve ever felt like it’s real that things could actually be overturned,” Tracy Leaman, 43, an event planner from the Washington area, said at Tuesday’s rally. “The Supreme Court is stacked against us for the first time in my lifetime. I feel like it’s scarier than ever before.”

A federal judge in Mississippi on Tuesday heard arguments in a lawsuit challenging the state’s new fetal-heartbeart abortion law. District Judge Carlton Reeves asked questions suggesting he thought the new law to be even more unconstitutional than the state’s 15-week abortion ban he struck down last year, USA Today reported.