How Russia Emerged As the New Power Broker in Middle East

By taking centre stage at the Astana conference with Turkey as its ally and asserting itself in the Syrian civil war by organising a ceasefire, Russia has re-established itself as a global power of consequence. 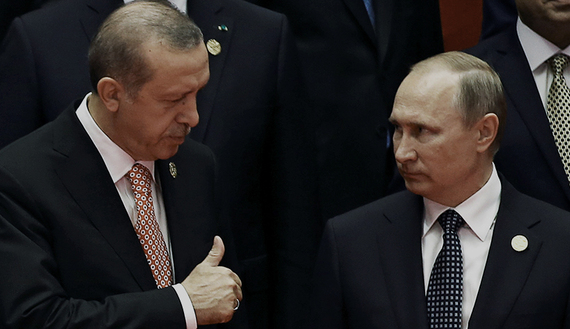 London: Nobody foresaw that a demand for the release of political prisoners by the residents of Deraa, a town in southern Syria, in March 2011 would lead to a major shift in the balance among world powers nearly six years later. But that is what happened with the successful conclusion of the Russian-orchestrated peace talks among the warring parties in Syria’s civil war in the Kazakh capital of Astana.

The notable absentee among the foreign participants was the US, which declined the invitation, sending instead its ambassador to Kazakhstan as an observer. It was an unmistakable sign of the Kremlin upstaging Obama’s White House in the strategic Middle East. The conference in Astana saw Turkey, a key member of NATO, abandoning the US and bonding with Russia to end the Syrian conflict – a development with the potential of upgrading Syria’s civil war as a landmark in global history.

For now, the Astana event enabled Russian President Vladimir Putin, a proud nationalist, to rebut robustly former US President Barack Obama’s disdain for Russia voiced after Moscow’s February 2014 annexation of Crimea: “Russia is a regional power that is threatening some of its immediate neighbours, not out of strength but out of weakness.” By taking centre stage at the Astana conference, with a NATO member as its ally, Russia showed that it was a superpower.

The Kremlin achieved this status in two stages: On September 30, 2015, it intervened militarily to shore up the falling regime of Syrian President Bashar al-Assad. And following the failed military coup against Turkey’s Recep Tayyip Erdoğan on July 15, 2016, Putin became the first foreign leader to telephone and congratulate the president.

The next month, Erdoğan traveled to St. Petersburg to meet his “dear friend” Putin. Relations had soured after the Turks shot down a Russian warplane over northern Syria the previous November. Referring to the aborted coup in Turkey, Putin declared that “We are always categorically opposed to any attempts at anti-constitutional activity.” After three hours of talks, the two leaders agreed to mend their strained economic relations and, in a striking reversal, Erdoğan stopped calling on Moscow’s ally Assad to step down. This meeting set the scene for an alignment between Russia and Turkey on Syria’s civil war where Turkey had been the foremost backer of the anti-Assad Syrian rebels.

A year earlier in August 2015, by all accounts, Assad was on the ropes, the morale of his dwindling army at rock bottom. Even support from Iran with arms and militia, and the Lebanese militant group Hezbollah, had proved insufficient to reverse his faltering hold on power, as confirmed recently by Russian foreign minister Sergey Lavrov. The Assad regime would have fallen “within two or three weeks,” he said, had Moscow not intervened in September.

Responding to Assad’s desperate appeal for urgent assistance, the Kremlin’s military planners decided to fill the gaping security hole left by Syria’s collapsing air force, bolster air defences and augment the depleted arsenal of tanks and armoured vehicles. For this, they turned one of Russia’s last footholds abroad, an airbase near the Mediterranean port of Latakia, into a forward operating base, and shipped warplanes, attack helicopters, tanks, artillery, armoured personnel carriers and advanced S-400 surface-to-air missiles.

As for Turkey, Putin reassured Erdoğan that the territorial integrity of Syria will be maintained at all costs. That is, the Syrian Kurdish enclave that nationalist Kurds carved out in northeastern Syria, with the help of Washington for backing the Pentagon’s drive against ISIS in the Syrian territory, will have to go at some point.

Erdoğan is obsessed about foiling aspirations of the Kurdish separatists and wants to ensure the semiautonomous Iraqi Kurdistan, the Kurdish majority southeastern Turkey and the adjacent Kurdish enclave in Syria do not unify to create Greater Kurdistan – a dream of the region’s Kurds since the end of World War I. His iron-fisted policy towards Kurds in Turkey has won him strong approval of the Nationalist Action Party. On January 20 it helped Erdoğan to garner more than 60% of the vote in parliament required to change the constitution from parliamentary democracy to executive presidency, his long-term aspiration.

At the end of the Astana meeting, Russia, Turkey and Iran announced plans for a trilateral commission to monitor breaches of the ceasefire that came into effect on December 29. Details of that organisation are expected to be announced before the UN conference on Syria in Geneva on February 8.

The Kremlin stressed that the Astana negotiations, attended by the Assad government and 14 Syrian rebel groups, were complementary to the UN process. The presence of the UN’s special envoy on Syria, Staffan de Mistura, at the conference and his inclusion in the official photograph along with the representatives of Russia, Turkey, Iran and Kazakhstan underscored Russia’s new leading role.

The Astana conference materialised because of compromises by all. Initially, Moscow scorned Washington’s distinction between moderate and extremist rebels, thus agreeing with Assad’s assertion that any group raising arms against an internationally recognised government of Syria was to be treated as terrorists. Eventually, Russia came around to distinguishing between extremist jihadist factions from non-jihadist ones. The sponsors of the Astana talks excluded not only ISIS and Jabhat Fateh al Sham, formerly known as al Nusra affiliated to al Qaida but also the Syrian Kurdish-led Syrian Democratic Forces which, according to Turkey, was associated with the Turkish Kurdistan Workers Party, listed as terrorist by Ankara and Washington. The ceasefire includes no moratorium on Syria, Russia and Iran regarding attacks on ISIS and Jabhat.

As for Syria, the government dropped insistence that only political representatives of the rebel groups be allowed to attend the talks and accepted the presence of military commanders of opposition factions.

Facts on the ground had changed dramatically, Turkish deputy prime minister Mehmet Simsek told the World Economic Forum in Davos on January 20, “Turkey can no longer insist on a settlement without Assad.” In Astana, the rebels’ chief negotiator Muhammad Alloush recognised “The Russians have moved from a stage of being a party in the fighting and are now exerting efforts to become a guarantor [of a truce].” On their part, the Russians unveiled their next move by handing the opposition delegation a position paper setting out a proposed constitution, including a path to new governing system, referendum and elections.

All in all, omens for progress at the UN’s February meeting in Geneva look promising. If so, Russia has pulled off a major coup reinserting itself as a peacemaker in the Middle East and reestablishing itself as a global power of consequence while the US is in retreat.

Dilip Hiro is the author of A Comprehensive Dictionary of the Middle East (Interlink Publishing Group, Northampton, MA). His latest book is The Age of Aspiration: Power, Wealth, and Conflict in Globalizing India (The New Press, New York) – published earlier as Indians in a Globalizing World: Their Skewed Rise (HarperCollins India).