The people of West Papua have suffered decades of oppression and discrimination at the hands of the Indonesian state. Now they’ve drawn inspiration from the Black Lives Matter protests to mount popular resistance to yet another authoritarian clampdown. 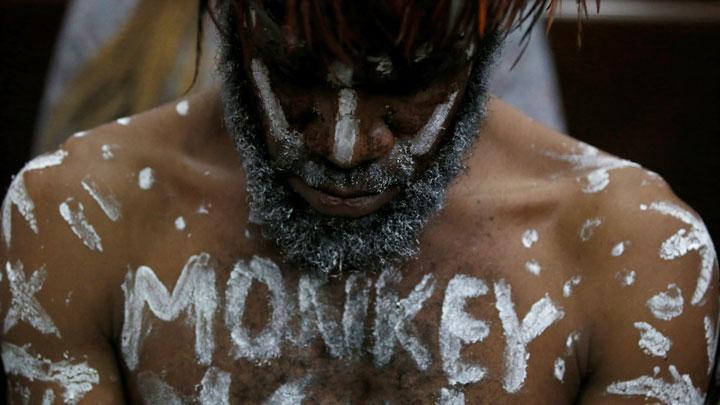 The anti-racist protests in the United States have helped inspire movements against oppression and discrimination in many parts of the world. One striking example comes from West Papua, which has been ruled as a province of Indonesia since the 1960s, with Jakarta’s security forces clamping down hard on agitation for independence or autonomy. The slogan “Papuan Lives Matter,” modelled directly on the African-American struggle, has become a rallying cry for Papuan activists.

A recent wave of unrest began in August 2019 after nationalist vigilantes attacked Papuan students in Indonesia’s second-largest city, Surabaya, and called them “monkeys.” They accused the students of insulting Indonesia’s national flag, which they categorically denied. The police then rounded up the students, firing teargas into their dormitory.

The scenes in Surabaya angered West Papuans who saw clips of the violence circulating via television and social media. They went on to organise one of the biggest anti-racism protests in modern Indonesian history. Thousands of people from all over West Papua attended rallies, holding signs that declared “West Papuans are not monkeys.” The initial protest wave lasted for several weeks, but its repercussions are still being felt today.

Like the other Indonesian provinces, West Papua is a former colony of the Netherlands. However, it remained under Dutch rule when Indonesia became an independent state after the Second World War. Indonesia took control of the province in the 1960s, calling it “Irian Jaya,” in what was meant to be a temporary arrangement until a referendum could be organised to determine its status.

When the so-called “Act of Free Choice” was eventually held in August 1969, it clearly did not represent the will of the people. Just 1,026 delegates, handpicked by the Indonesian military, took part in the exercise — less than 2% of the population of 800,000. In a cable from July 1969, the US embassy in Jakarta described the nature of the “referendum”:

The Act of Free Choice (AFC) in West Irian is unfolding like a Greek tragedy, the conclusion preordained. The main protagonist, the GOI [Government of Indonesia], cannot and will not permit any resolution other than the continued inclusion of West Irian in Indonesia. Dissident activity is likely to increase but the Indonesian armed forces will be able to contain and, if necessary, suppress it.

Another cable sent from the embassy that month suggested that the “great majority” of the population “favour[s] a termination of Indonesian rule.”

West Papuans who refused to accept the Indonesian occupation organised themselves to form the Free Papua Movement (OPM). A low-level insurgency has been simmering in the region ever since. In response, Indonesia has charged thousands of West Papuans with treason merely for expressing their political beliefs. Yet the movement continues to flourish.

The Indonesian state denied that West Papuans constitute a distinct community with their own Melanesian culture and sought to “Indonesianize” the province after annexing it. The authorities in Jakarta encouraged migration of non-Papuans from Java, Sumatra, and other regions into West Papua, in a push for ethnic acculturation. The religious demography of the Christian-majority province began to shift as the Muslim population grew.

Also read: What’s At the Root of the Unrest in Indonesia’s Papua?

In spite of these developments, the influence of the Melanesian identity has been growing in West Papua. One manifestation of this is the popularity of the slogan “Sorong-Samarai,” which asserts a fraternal bond between West Papua and its ethnic neighbour Papua New Guinea. (Sorong and Samarai lie at the western and eastern extremes of the island respectively.)

Jakarta’s methods
Although it is little known in the United States, Washington played a key role in the annexation of West Papua, as the architect of the 1962 New York Agreement that paved the way for the Indonesian takeover and the “Act of Free Choice.” The US government approached the question of West Papua from the standpoint of the Cold War in the Pacific region. In the 1950s, the Soviet Union gave support to Sukarno, Indonesia’s first postindependence leader, while the Communist Party of Indonesia (PKI), the world’s largest nonruling communist movement, aligned itself with China after the Sino-Soviet split.

The United States responded by supporting the 1965 coup of Indonesian army general Haji Mohammad Suharto against Sukarno: the CIA supplied its own list of PKI members across the country for Suharto’s hit squads. In his book The Jakarta Method, Vincent Bevins has documented this American-made program of mass murder, which supplied a template for future massacres in Latin America. After supporting the decisive annexation of West Papua by Suharto’s regime, the United States also went on to endorse the Indonesian invasion of East Timor in the 1970s, which was followed by large-scale atrocities against the civilian population.

The US mining company Freeport–McMoRanFre took a majority stake in West Papua’s Grasberg mine, which contains some of the world’s largest gold and copper deposits. Henry Kissinger joined the company’s board in the late 1980s. The company has continued to exploit the region’s natural resources to the present day, dumping waste and polluting West Papua’s rivers and parks.

A 2005 New York Times report found that there was an intimate relationship between Freeport and the Indonesian security forces in the region:

From 1998 through 2004, Freeport gave military and police generals, colonels, majors and captains, and military units, nearly $20 million. Individual commanders received tens of thousands of dollars, in one case up to $150,000, according to the documents. They were provided by an individual close to Freeport and confirmed as authentic by current and former employees.

US support for the Indonesian regime continued despite brutal repression in West Papua and elsewhere. In 1977–78, Indonesia launched extensive US-backed military operations in the Papuan central highlands in response to popular unrest that was linked to the state-controlled Indonesian national elections of 1977. The Indonesian military used warplanes supplied by Washington to bomb villages. Thousands of civilians were killed. Total estimates of the civilian death toll since the Indonesian takeover range from at least 100,000 to as many 500,000 people.

West Papua is still Indonesia’s most violent province. Academic Bobby Anderson has compared the homicide rates in West Papua with other countries around the world. He found that the homicide rate in the Mimika district — 29.2 per 100,000 people, thirty times greater than the Indonesian average — “puts Mimika on a par with Colombia or the Democratic Republic of the Congo,” while the regional capital Jayapura had ten homicides per 100,000, comparable to Haiti and Liberia.

A group of researchers from Australia and the UK set out to map violence in West Papua since the 1970s. They found that “many killings were committed while Papuans were peacefully protesting for independence from Indonesia,” and that the perpetrators were not held to account in the “vast majority” of cases. The culture of impunity remains deeply embedded.

While the largest number of killings took place in the 1970s, atrocities have continued right up to the present. In December 2018, the Indonesian military bombed villages in the mountainous region of Nduga, forcing 45,000 local people to flee into the jungle or neighbouring districts for safety.

In response to 2019’s anti-racism protests, the Indonesian government launched a crackdown on Papuan activists. According to figures from TAPOL, a UK-based organisation that monitors human rights in Indonesia, there were 169 protesters arrested in total. In Malang, East Java, civilian militias attacked the demonstrators, who were kicked and beaten while the police watched. Indonesia’s national police subsequently detained six Papuan activists in Jakarta, along with seven more in the city of Balikpapan, who were depicted as the masterminds of the protest wave.

The “Jakarta Six” received eight- and nine-month prison sentences in April 2020 from a court in the Indonesian capital, having been convinced on charges of treason for flying the West Papuan Morning Star flag and chanting “Free West Papua.” Meanwhile, the seven activists in Balikpapan also faced treason charges, with the prosecution seeking up to 17 years in jail. The court convicted them, but handed down a lighter sentence of 11 months. Protesters clash with police in Jakarta, Indonesia May 22, 2019 in this photo taken by Antara Foto. Photo: Antara Foto/Nova Wahyudi/ via Reuters

The seven Balikpapan defendants included Buchtar Tabuni, a well-known leader of the National Parliament of West Papua, who has already been jailed for organising protests. His wife Dessy Awom has described the brutal raid that arrested Tabuni, a joint operation between the Indonesian military and police. The soldiers and police officers, who were fully armed, broke down the door of their home and smashed all the furniture. The security forces also destroyed their garden and killed their animals. The raid was carried out without a warrant.

Twenty-three other West Papuans are still facing charges of treason. The crackdown continued on December 1, 2019. TAPOL has identified sixty-one new political prisoners arrested on that date, as West Papua marked its National Day — the anniversary of the day in 1961 when the Dutch colonial authorities acknowledged West Papua as a free nation for the first time. Every year, Papuans across Indonesia take to the streets with Morning Star flags and chants of “Free West Papua.”

As the Papuan human rights activist Welis Doga has pointed out, Indonesia’s current penal code draws directly on colonial legislation from the Dutch East Indies. One of the articles in that code — relating to treason or “anslaag” — was formerly used by the country’s Dutch rulers to silence Indonesian nationalists. Today, Indonesia uses it to criminalise Papuan dissenters.

Papuan Lives Matter
In the wake of George Floyd’s death and the eruption of protest in the United States, West Papuans have found inspiration to link their own struggle with the Black Lives Matter movement. They have put forward the slogan “Papuan Lives Matter” to express this affinity. The campaign has supplied a platform for West Papuans to insist that the Indonesian state should treat them equally and end the racial abuse they encounter from its police force and legal system. Students held a rally demanding the release of Papuan political prisoners and #PapuanLivesMatter became a trend on social media.

The Communion of Churches in Indonesia released a statement expressing “deep concerns” over the Balikpapan Seven case, and condemning “the criminalisation of young people” by the Indonesian authorities. As TAPOL’s Pelagio Da Costa Sarmento noted, there has also been international support for the West Papuan struggle. Some of these initiatives preceded the latest round of protest, but the context of Black Lives Matter has made it easier to raise awareness of what is happening in West Papua. TAPOL has noticed an uptick in interest: according to Sarmento, “we believe this is the next stage of something bigger.”

Many West Papuans think that the Indonesian courts were responding to international pressure when they handed down lighter sentences for the Balikpapan Seven than the prosecution had demanded. Benny Wenda, the chairman of the United Liberation Movement for West Papua, described the verdict as “a great victory for our movement worldwide,” even though the verdict of treason should not have been handed down at all: “The worldwide pressure made all the difference.”

Student activists in Indonesia have organised public forums for West Papuans to describe their experiences of oppression and discrimination. The latest ones have focused on the Biak massacre of 1998, when Indonesian security forces tortured and murdered scores of unarmed civilians in the region. Victor Yeimo, leader of the National Committee for West Papua, hailed these efforts as proof that treason charges will not stop the unfolding dynamic of “Papuan Lives Matter”: “Prison will never stop the struggle for Papuan independence.”

Febriana Firdaus is a journalist based in Indonesia, and produces the Voice of Papua newsletter.