Amid Growing Clampdown on Dissent and Free Speech, Hong Kong's Youth Is Pushing Back

Rising levels of poverty and inequality are adding to the frustrations of young people in the country, most of whom want to be identified as Hong Kongers, rather than Chinese or even Hong Konger in China. 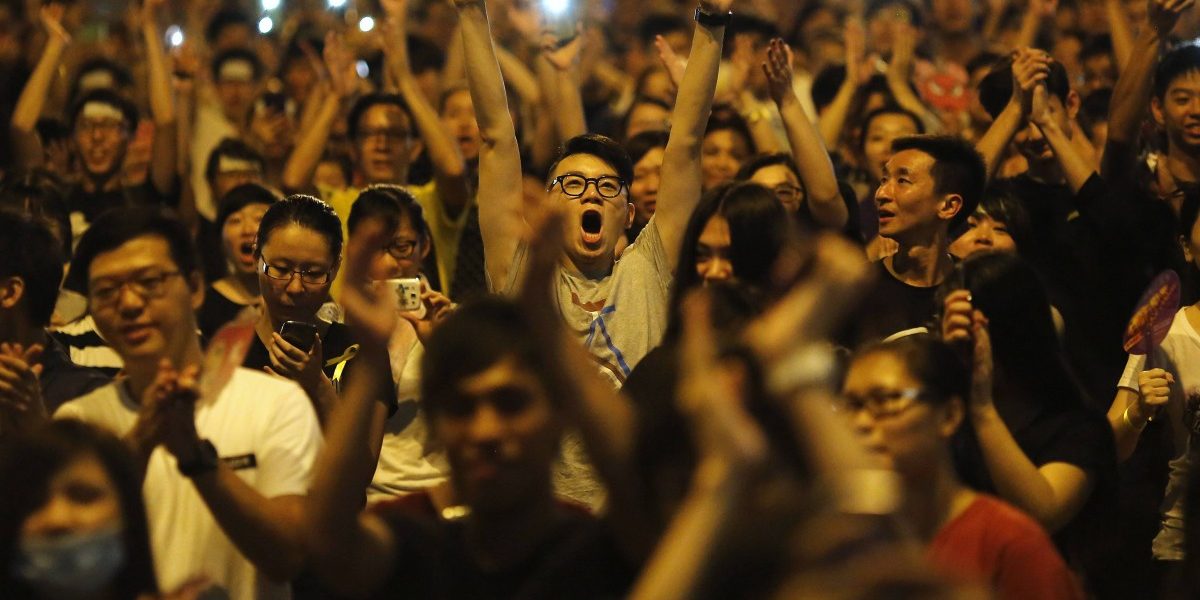 Protesters react as Joshua Wong, leader of the student movement, speaks to the crowd outside the government headquarters building in Hong Kong. Credit: Reuters/Carlos Barria

Hong Kong: On September 28, when Hong Kong marked four years of the Umbrella Movement, 20-year-old Jessie Tse was there, commemorating. She set up a temporary projector on the pavement, exhorting people to watch a short film about the biggest-ever civil disobedience movement, so that “they don’t forget,” Tse says.

Amidst increasing curbs on dissent and free speech in Hong Kong, youngsters like Tse are silently pushing back. This has meant that Hong Kong’s political struggles are slowly, yet surely, taking a distinct turn. Four years ago, protesters wanted democracy while being under Chinese rule; now, an increasing number want independence from China.

Tse, who was just 16 when the movement broke out, is a good exemplar of this shift. She was a part of the movement because she believed that genuine democracy would alleviate Hong Kong’s issues. The movement was a cry for universal suffrage, for citizens to be able to elect their own leader, as against the current system where its chief executive is elected by the legislative council from a list of pre-screened, Beijing approved candidates. Back then, protesters like Tse did not mind being a part of the Chinese state. This is no longer true. 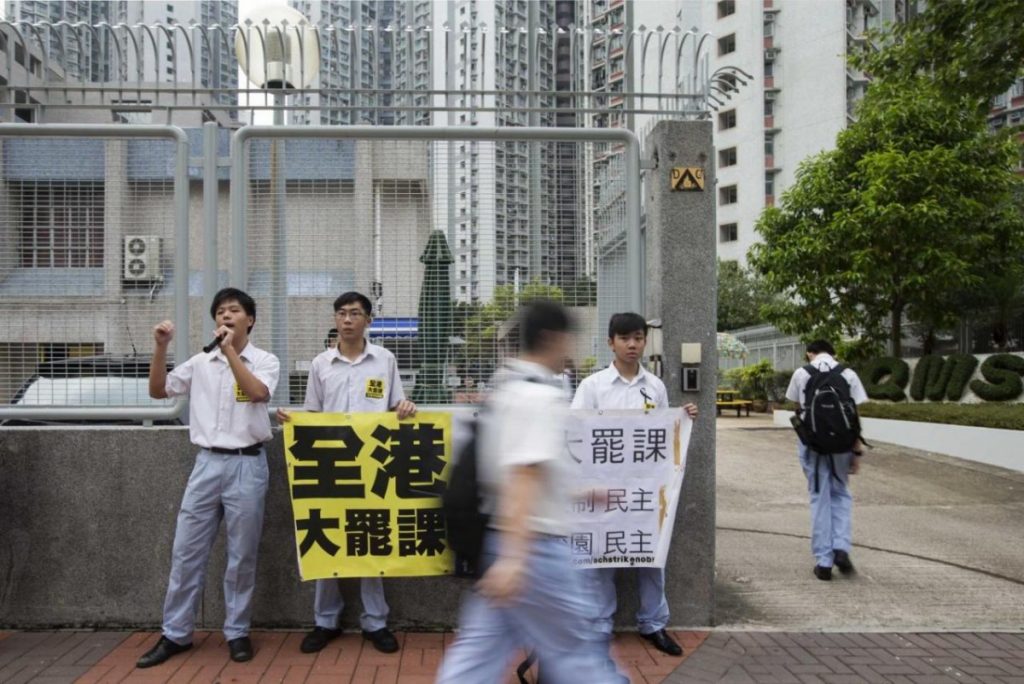 In the last two weeks alone, Hong Kong has witnessed repeated tense stand-offs between protesters and the government. The most visible was the unprecedented ban on the Hong Kong National Party (HKNP) for advocating independence from China. The week before that, there were protests over allowing Chinese forces to conduct immigration procedures on Hong Kong territory for the newly-opened high-speed rail line connecting mainland China to Hong Kong. Protesters said that this was a sign that China was tightening its grip over HK.

The latest was last week when the Hong Kong authorities declined to renew the visit of the Financial Times’ Asia editor, Victor Mallet after he chaired a talk by pro-independence activist Andy Chan in August at the Foreign Correspondents’ Club in HK, where he is the vice-president.

These instances have only widened the gulf between youngsters towards China. In fact, a recent study showed that over 70.9% of those between 18 and 29 in Hong Kong want to be identified as ‘Hong Kongers’, rather than Chinese or even Hong Konger in China, from 59.8% people at the end of 2014 – after the Umbrella Movement. This is the highest ever proportion of people wanting to be identified as Hong Kongers ever since its colonial handover. 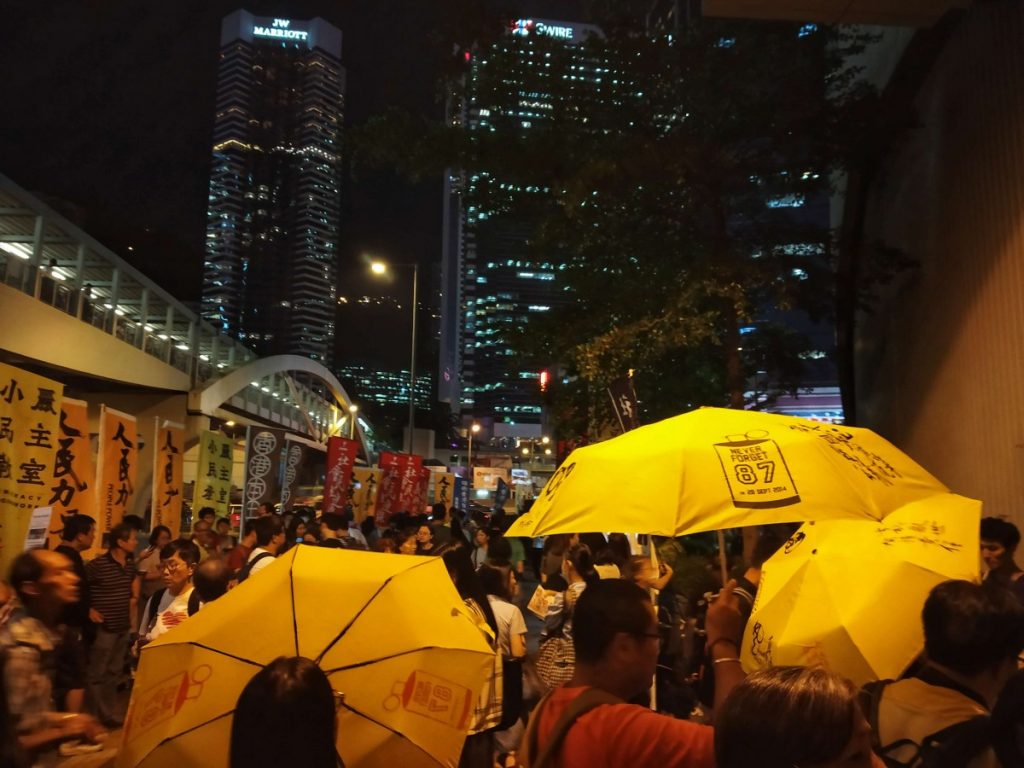 Scenes from the the Umbrella Day commemorations on September 28 outside the HK Government headquarters in Admiralty, Hong Kong. Most banners (like the ones in yellow) demanded ‘real, genuine democracy and universal suffrage.’ Some others were more courageous and demanded Independence. Credit: Kunal Purohit

Identity issues aside, the political conflict over Hong Kong has frequently played out on university campuses across Hong Kong over the past year, especially, and it continues to do so. On Friday, students at HK’s Polytechnic University called a hunger strike after the university authorities tried to censor pro-independence messages on a bulletin board managed by students. These messages emerged anonymously after the HK government banned the HKNP.

Angry at the university’s attempts to cover these messages up with paper, students fought back and tore the paper down. On October 5, they announced their decision to go on a hunger strike until the university backs off from censoring political graffiti. By Saturday morning, student groups from six different HK universities had joined forces with the protesting students. A day later, 23 HK lawmakers came out in support of the protesting students. On Sunday, the hunger strike was called off after both camps said an ‘agreement’ had been reached – no details have been given.

Such conflicts are now increasingly common. The students’ union of the Chinese University of Hong Kong saw banners advocating independence from China crop up across the campus on the first day of the academic year. William Chan, a student of physics and the external vice-president of the university’s student union, says that they faced similar pressure from the university to remove the banners, but they resisted.

For people like Chan, such outbursts are a result of the growing frustration among young people like him in HK. “The failure of the Umbrella Movement and subsequent smaller protests have made young people helpless and often they don’t know what the way out of this is.” Chan says many have grown radical in their politics as a result of this helplessness, demanding independence from China rather than democracy within it, as the original demand was.

This helplessness that Chan talks about is a recurring theme in the activist circuits in Hong Kong. Activist Joshua Wong, 21, whose party ‘Demosisto’ seeks greater economic and political economy from China, and who was one of the leaders of the Umbrella Movement, says that the HK government’s repression through imprisonment has added to the frustration.

“People are feeling downhearted and depressed because they see how those who speak out, even if it is only for democracy and not independence, face imprisonment and criminal charges. Right now, over 100 activists, politicians and scholars currently face charges,” says Joshua. He, himself, faces multiple charges and has been imprisoned for over 100 days over the last two years. Joshua says he knows activists from the Umbrella Movement who now seek independence from China. “They saw first-hand the brutality of the police force and the abuse of power during the movement. That changed their opinion.”

Joshua believes that though the young are more frustrated than ever, they don’t want to participate in political activities just yet. “Four years ago, they rallied because they had hope,” says Joshua. “Now it is replaced with fear.”

Another factor which might accentuate the frustrations of many young people in Hong Kong is the rising level of poverty and inequality. Two weeks ago, Oxfam, in its Hong Kong Inequality Report revealed that the situation is worse than ever before: the richest in HK now earn over 44 times more than its poorest. In the city, known for clichés around its glittering skyline, over 1.3 million live in poverty, the report estimated. It also revealed how Hong Kong, which has the dubious distinction of being the world’s most expensive real estate market, has seen housing rents increase by over 80% in the last decade alone. 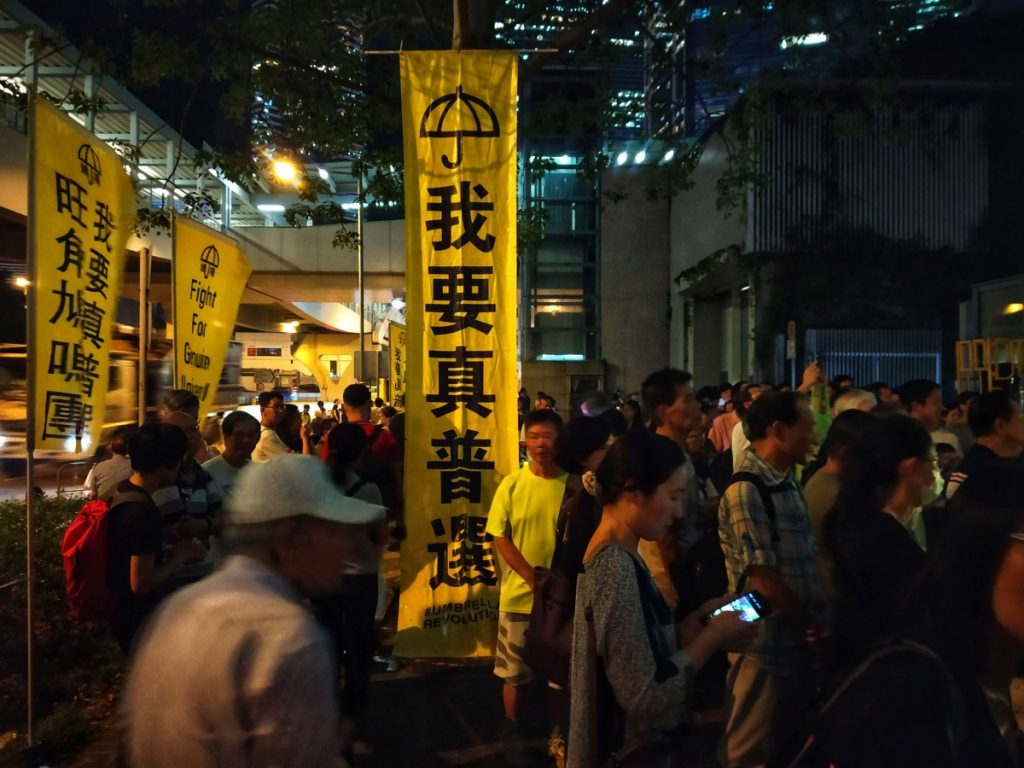 Scenes from the the Umbrella Day commemorations on September 28 outside the HK Government headquarters in Admiralty, Hong Kong. Most banners (like the ones in yellow) demanded ‘real, genuine democracy and universal suffrage.’ Some others were more courageous and demanded Independence. Credit: Kunal Purohit

All this has only contributed to the frustrations among many young Hong Kongers who demand a more responsive state and a governance system more accountable. That’s why pro-democracy parties like the League of Social Democrats are trying hard to tap into these issues and enthuse more people into being more active. “For most people struggling to make ends meet, it would benefit them much more if the political movement responds to their everyday struggles as well,” says 29-year old Raphael Wong, the vice-chairman of the party. Raphael, who was also one of the leaders of the Umbrella Movement, says that the party takes up issues of social justice and welfare and gets them addressed, by campaigning, reaching out to people and advocating with the government.

Amidst all this, though, many fear that the curbs on free speech are only going to grow. Last week, the Hong Kong government announced that separatist slogans won’t be allowed in one of the most popular protest sites in the city – the Civic Square, at the government headquarters.

Even the ban on the HKNP, for instance, is being interpreted as a sign of things to come, says Raphael. “The HKNP was never very popular and didn’t have a big base. Hence, Beijing wanted to make an example out of them to make all of us toe the line.” Raphael’s words find an echo with his co-activist Joshua, whose party Demosisto is already courting fire from Beijing. A pro-Beijing legislator and member of the Basic Law Committee in HK which advises the Chinese government on the city’s constitution, Priscilla Leung Mei-Fun, last week said that Demosisto should be the next in line to be outlawed. Joshua says that the outfit expects a reprisal from Beijing and the HK government, even though it only seeks universal suffrage and not secession.

“It is a matter of time, a few months or a year or so. But they will act against us,” he says.

More than the action against outfits, though, what many in Hong Kong are fearful of is a new national security law that has been on the anvil, dealing with acts of ‘treason’, ‘secession’ and ‘sedition’ under Article 23 of Hong Kong’s Basic Law, which governs its function. If enacted, activists fear that such a law would criminalise any form of political dissent against Beijing. Plans to introduce it in 2003 as the ‘National Security Bill’ were shelved after mass protests by Hong Kong citizens and pro-democracy legislators. However, pressure is now slowly building up on Hong Kong’s administrators to enact it. In August, Beijing’s head of Hong Kong affairs, Zhang Xiaoming, nudged the government here to consider bringing in the controversial law, to which HK’s chief executive Carrie Lam agreed, but insisted that it would come at “the right time.” More recently, the Basic Law Committee’s chairman, Shen Chunyao, also called for the law to be enacted soon.

Tam Tak Chi, leader of the pro-democracy People’s Power political party, says that there is little doubt that the law is coming. “That is the big battle ahead. It is coming very soon because they’ve already started to create the atmosphere around it with the ban on the HKNP.”

Many believe that the increasing clampdown on political freedom might be the final trigger needed for another mass movement in Hong Kong. Raphael, of the League of Social Democrats, says that more and more youngsters are turning radical in demanding independence because the cost, he says, is the same. “You’ll be punished for speaking out anyway, doesn’t matter if you demand democracy or independence.”

Demosisto’s Joshua agrees that this increased repression will draw more people out. “But the negative effects of Article 23 and other repressive moves that we see coming are higher than the momentum it might offer to the campaign. That is my real fear.”

Kunal Purohit is an independent journalist, based out of Mumbai. He reports on issues of development at the intersection of caste, politics, gender and migration among other things. He is currently in Hong Kong as a visiting journalism fellow at the Hong Kong Baptist University.