Thousands of Hong Kong protesters on Sunday chanted the US national anthem, appealing for democracy after another night of violence in the 14th week of unrest. 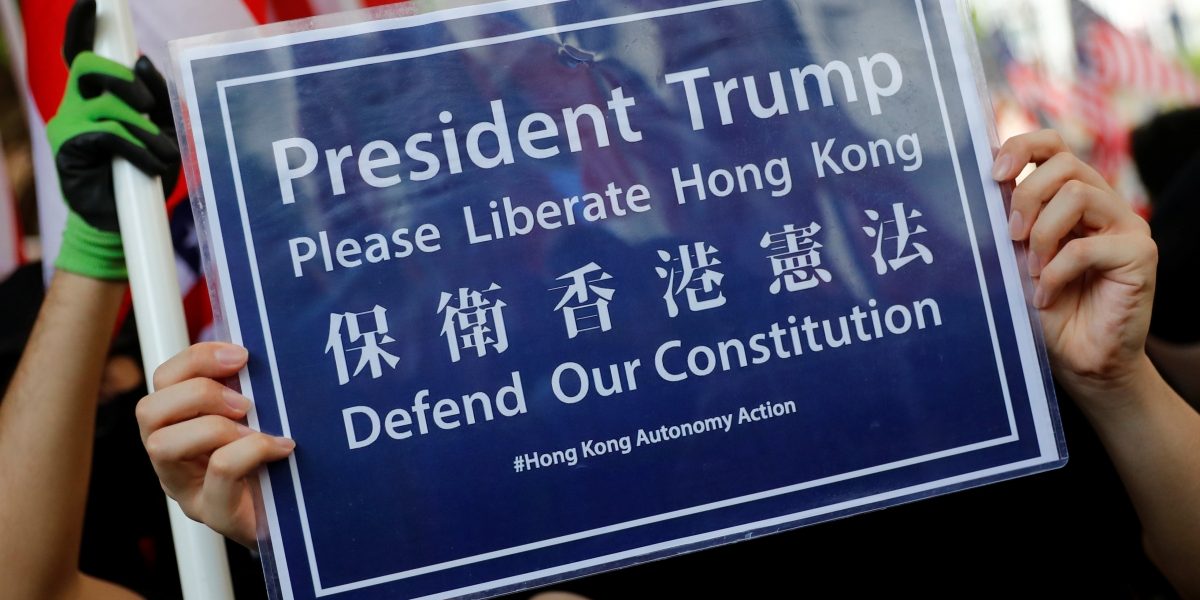 Hong Kong: Thousands of Hong Kong protesters on Sunday chanted the US national anthem and called on US President Donald Trump to “liberate” the Chinese-ruled city, the latest in a series of demonstrations that have gripped the territory for months.

Police stood by as protesters, under a sea of umbrellas against the sub-tropical sun, waved the Stars and Stripes and placards appealing for democracy after another night of violence in the 14th week of unrest.

US Defence Secretary Mark Esper on Saturday urged China to exercise restraint in Hong Kong, a former British colony which returned to Chinese rule in 1997.

Esper made his call in Paris as police in Hong Kong prevented protesters from blocking access to the airport but fired tear gas for a second night running in the densely populated district of Mong Kok.

“With the US locked in a trade war with China at this point in time, it’s a good opportunity for us to show (the United States) how the pro-China groups are also violating human rights in Hong Kong and allowing police brutality,” said Cherry, 26, who works in the financial industry, as protesters marched towards the nearby US Consulate.

“We want the US administration to help protect human rights in Hong Kong.”

Hong Kong returned to China under a “one country, two systems” formula that guarantees freedoms not enjoyed on the mainland. Many Hong Kong residents fear Beijing is eroding that autonomy. 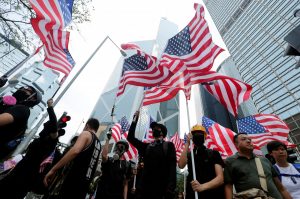 China denies the accusation of meddling and says Hong Kong is an internal affair.

It has denounced the protests, accusing the United States and Britain of fomenting unrest, and warned of the damage to the economy.

Hong Kong leader Carrie Lam announced concessions this week aimed at ending the protests, including formally scrapping a hugely unpopular extradition bill, which ignited the unrest in June. Many protesters said it was too little, too late.

The bill would have allowed the extradition of people to mainland China to stand trial in courts controlled by the Communist Party. Hong Kong has an independent judiciary dating back to British rule.

But the demonstrations have long since broadened into calls for more democracy and many protesters have pledged to fight on.

The US State Department updated its travel advisory for Hong Kong, warning that US citizens and consular employees had been the targets of a recent propaganda campaign by China “falsely accusing the United States of fomenting unrest”.

The overall risk level remains at the second lowest of a four-level gauge, after it was raised on August 7 to reflect the escalating violence.

US Vice President Mike Pence has urged Beijing to treat Hong Kong protesters humanely, warning that it would be harder for Washington to make a trade deal with Beijing if there was violence.

In contrast, Trump alternates between praising Chinese President Xi Jinping as a great leader and casting him as an enemy, while excoriating China for taking advantage of US businesses.

Beijing announced that top officials would head to Washington in early October to hold talks aimed at ending a tit-for-tat trade war, now in its second year, which has roiled markets and hammered global growth.