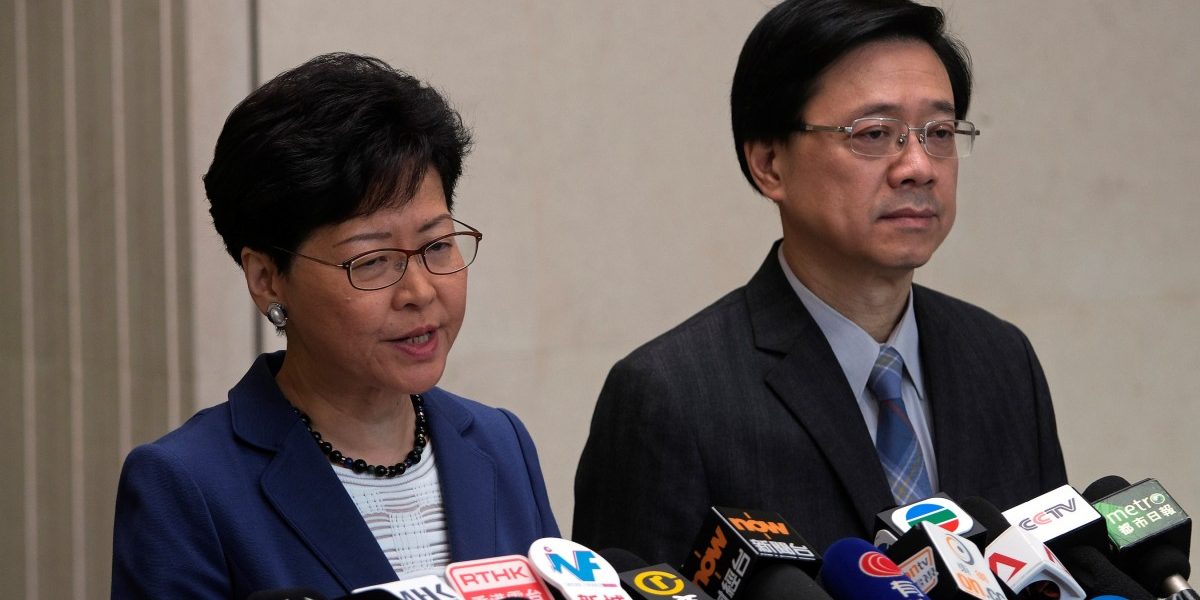 Hong Kong: Hong Kong leader Carrie Lam vowed on Monday to push ahead with amendments to laws allowing suspects to be extradited to mainland China a day after the city’s biggest protest since its handover from British to Chinese rule in 1997.

Riot police ringed Hong Kong‘s legislature and fought back a hardcore group of several hundred protesters who stayed behind early on Monday after Sunday’s peaceful march that organisers said drew more than a million people, or one in seven of the city’s people.

“I don’t think it is (an) appropriate decision for us now to pull out of this bill because of the very important objectives that this bill is intended to achieve,” a sombre Lam told reporters while flanked by security and justice chiefs.

“While we will continue to do the communication and explanation there is very little merit to be gained to delay the bill. It will just cause more anxiety and divisiveness in society.”

The protests plunged Hong Kong into a political crisis, just as months of pro-democracy “Occupy” demonstrations did in 2014, heaping pressure on Lam’s administration and her official backers in Beijing. Chants echoed through the high-rise city streets on Sunday calling on her to quit. “Extradite yourself, Carrie!,” one placard read.

The rendition bill has generated unusually broad opposition, from normally pro-establishment businesspeople and lawyers to students, pro-democracy figures and religious groups who fear further erosion of Hong Kong‘s legal autonomy and the difficulty of ensuring even basic judicial protections in mainland China.

Britain handed Hong Kong back to China under a “one country, two systems” formula with guarantees that its autonomy and freedoms, including an independent justice system, would be protected.

But many accuse China of extensive meddling in many sectors, denying democratic reforms and squeezing freedoms, interfering with local elections and the disappearances of five Hong Kong-based booksellers, starting in 2015, who specialised in works critical of Chinese leaders. All later appeared in detention in China, and some appeared in apparent forced confessions broadcast in Hong Kong.

“We resolutely oppose wrong words and actions by any foreign forces to interfere in the legislative matters of the Hong Kong SAR,” he said, referring to the “special administrative region”.

An official newspaper in China, where the Communist Party holds sway over the courts, said, “some Hong Kong residents have been hoodwinked by the opposition camp and their foreign allies into supporting the anti-extradition campaign”.

The proposed changes provide for case-by-case extraditions to jurisdictions, including mainland China, beyond the 20 states with which Hong Kong already has treaties.

It gives the chief executive power to approve an extradition after it has been cleared by Hong Kong‘s courts and appeal system.

Lam said last month that, after feedback from business and other groups, only suspects facing more serious crimes, or those normally dealt with by Hong Kong‘s High Court, with a minimum punishment of at least seven years, rather than the three years, would be extradited.

She said that extradition requests from China could only come from its highest judicial body, the Supreme People’s Procuratorate, rather than any provincial authorities.

A US official said Washington was monitoring the situation closely, noting that it called into question Hong Kong people’s confidence in the future of “one country, two systems”.

“It shows how much Hong Kong people treasure their autonomy and how much they want it to continue,” the official said.

Tara Joseph, president of the local American Chamber of Commerce, said the credibility of Hong Kong was on the line.

“The passage of this bill comes at the expense of the business community and we fear business confidence will suffer,” she said.

“This bill is not about the mainland alone. This bill is not initiated by the central people’s government. I have not received any instruction or mandate from Beijing to do this bill,” she told reporters.

She said the bill would be put up for debate on Wednesday as planned in the city’s 70-seat Legislative Council which is now controlled by a pro-Beijing majority.

Lam and her officials stress the need for haste to prosecute a young Hong Kong man suspected of killing his girlfriend in Taiwan. But Taiwanese officials say they won’t agree to any transfer if the bill goes ahead, citing rights concerns.

In Taiwan, which China regards as a breakaway province, President Tsai Ing-wen said on her Facebook page: “We support the people of Hong Kong‘s search for freedom, democracy and human rights.”

Beijing officials have increasingly defended Lam’s plan, couching it as a sovereign issue. A retired senior mainland security official said in March that Beijing had already had a list of 300 mainland criminals it wanted back from Hong Kong.

Organisers put the size of Sunday’s crowd at more than a million, outstripping a demonstration in 2003 when 500,000 took to the streets to challenge government plans for tighter national security laws.

About 1,000 people joined a protest in Sydney and another protest was also reported in London.

US and European officials have issued formal warnings, matching international business and human rights lobbies that fear the changes will dent Hong Kong‘s rule of law.

Guards removed damaged barricades from the front of the Legislative Council building during Monday’s morning rush hour and cleaning staff washed away protest debris. All but one protester were cleared from the area.

Hong Kong newspaper Mingpao said in an editorial that the government should take the protesters seriously and that pushing the legislation forward would exacerbate tensions.